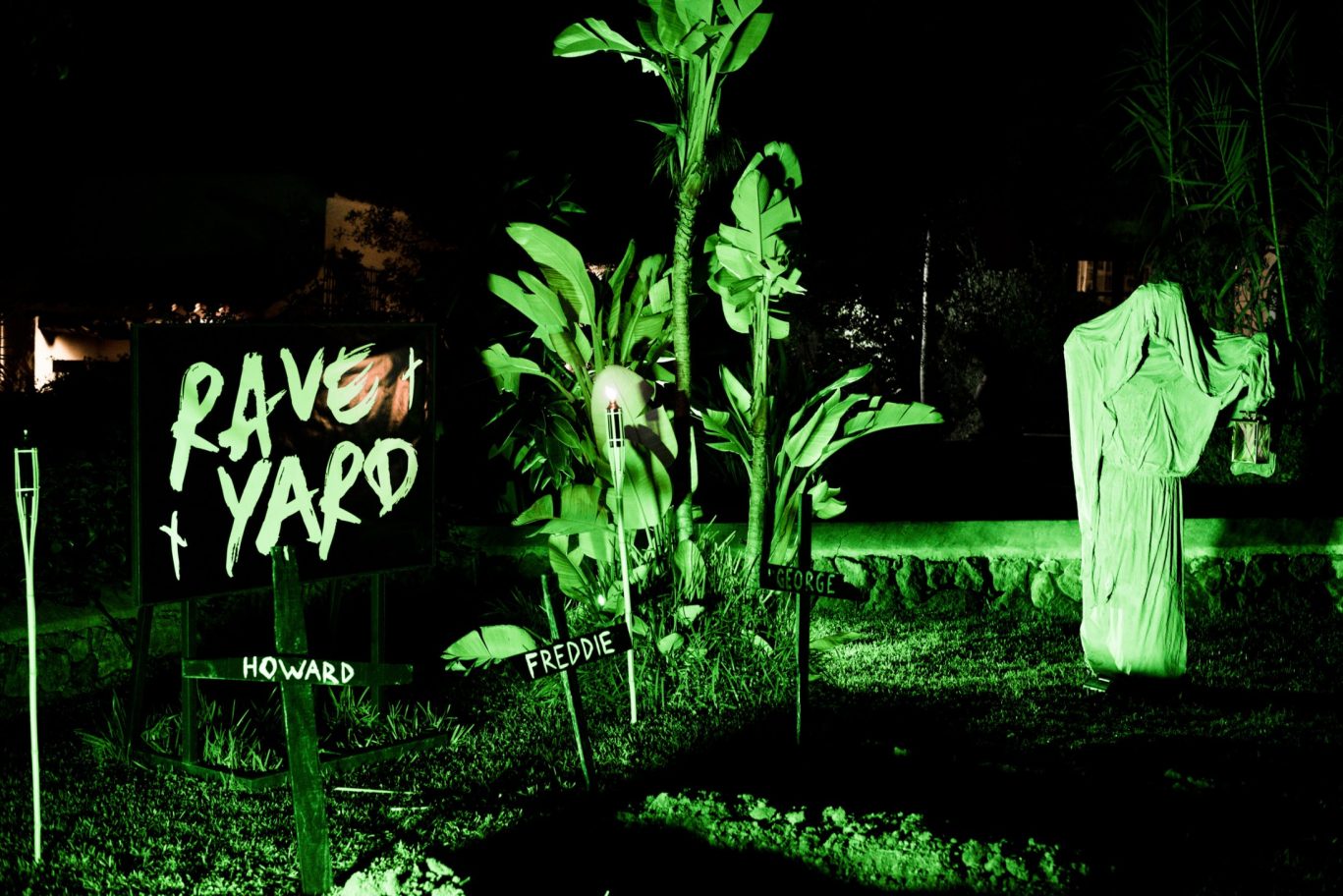 You can check in, but you can never check out…

‘Twas the night before Halloween, and all through our house, not a creature was stirring – not even our mural mouse. All the people were gone, all the sunbeds packed away, Pikes was just like a ghost town on this gloomy old day. We’ve got spirits in droves here, and not just behind the bar – we’re haunted by guests, our beloved founder and the odd rock star. On most days, we don’t cross paths with our phantasmagorical friends, but as All Hallow’s Eve approaches, they’ve been disturbed by two evil men. Enter The Brothers Grim…

Decorating the hotel with visions of Satanists and lunatics galore, each Brother has nothing but darkness at his core. They take over every last corner, they’re lurking behind every door – but there’s one space at Pikes they can’t seem to access any more. Why, it’s Room 27 – once the former residence of Tony Pike! Could it be that it’s protected by the ghosts of Freddie Mercury, George Michael and the like? They bring chainsaws and crowbars trying not to get deterred, but eventually they give up, and ask Pikes creative director Dawn Hindle to have a word. 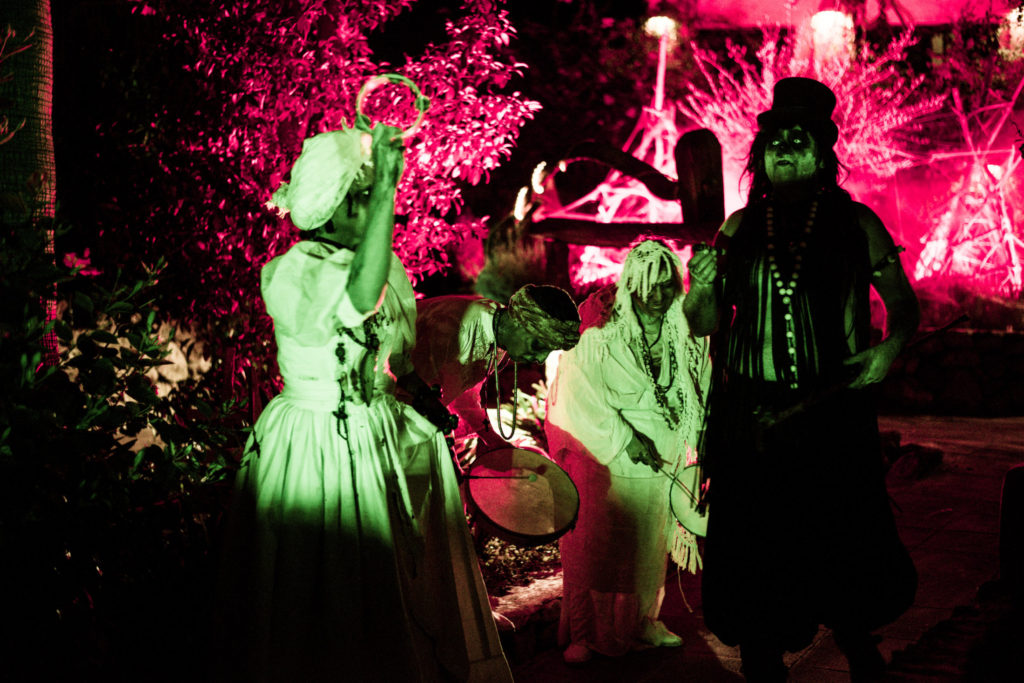 Our dear heroine arrives in a flurry of long grey locks, and when she laid eyes on the Brothers she sighed and wished she was back at Ibiza Rocks. “Leave it to me,” she said, her eyes on the prize – but little did she know she was in for a scary surprise. As Dawn skipped up the garden path and ventured beyond the pool, the temperature suddenly went from very hot to super cool. An enormous black cloud formed directly overhead – at exactly the same time, all the electricity and phone lines went dead. She looked around and The Brothers Grim were nowhere to be seen. This was all starting to feel like a very bad dream.

“I know,” thought Dawn. “I’ll go find Sunny. If nothing else, these old ghosts might find him funny.” She doubled back to the Boudoir, and opened the door – and found Sunny distraught, sitting alone on the floor. “They’ve taken all my sequins!” he screamed with despair. “And my wigs, my hats, my shoes – every last pair!” This wasn’t the Sunny she needed by her side; Dawn left him to wallow and went back outside. The sky had gotten darker, the air was thick with fog – it didn’t look like Pikes anymore, so the only answer was to find some grog. 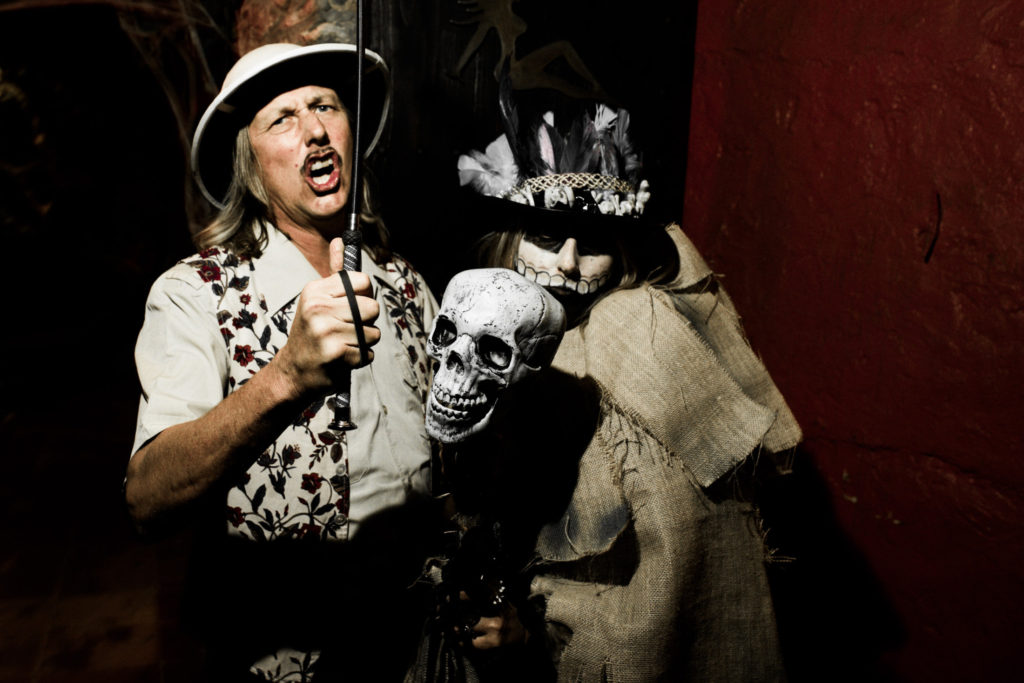 She tip-toed up the stairs to The Curiosity Shop at Room 39 – there were no bartenders to be seen, but seriously, who needs them to open wine? Now, dear readers, this is where our story takes a terrifying turn – you see, the bar was completely empty, as our Dawn would come to learn. With our Halloween party due to start in less than 24 hours, she needed to enlist the help of someone with super powers. A bar without booze? The horror, the horror. This had to be fixed by this time tomorrow.

As Dawn reached for her mobile phone, she froze in her tracks. All of a sudden she was surrounded by ALL the Pikes cats. There was Sneezy, and Blossom, and Pikey, and Ziggy; getting out of this bar was going to be tricky. Our clowder of felines, once cuddly and sweet, were completely possessed and wanted to taste human meat. Dawn looked down at the pool, now filled with blood, and just as she was about to jump, she heard an almighty thud. The cats did a runner and Dawn swiftly did the same, as she decided that she’d had enough of this ridiculous Halloween game. 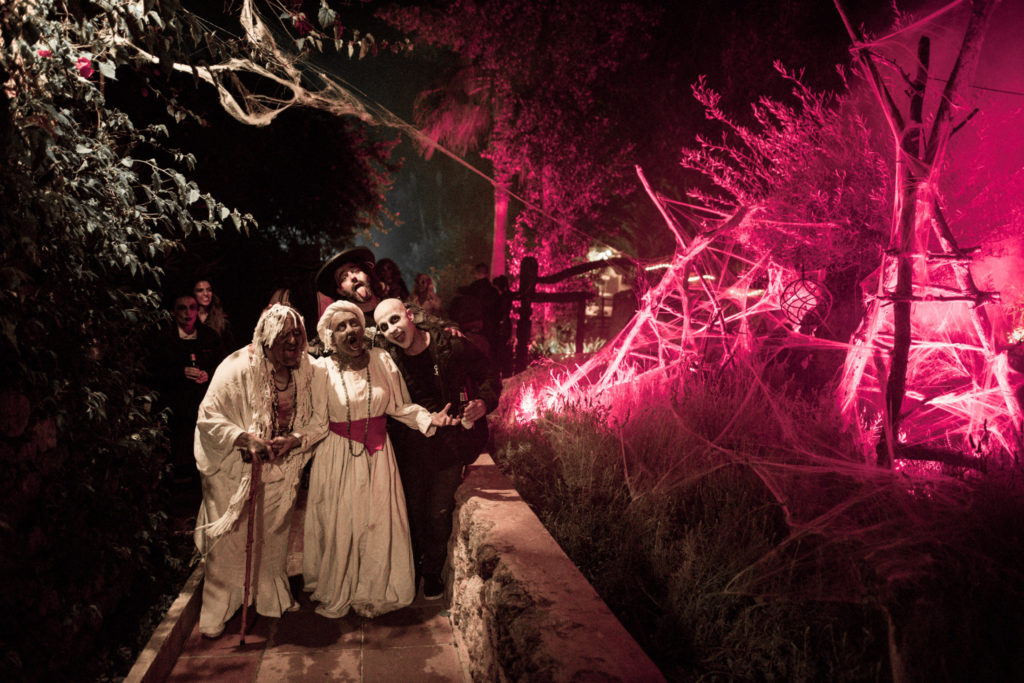 The big bang had come from Plaza Mayor, but when she looked around, Dawn couldn’t remember what she was there for. To her surprise, she saw Mika, our captain of the night. “Oh it’s just you!” she said. “You gave me such a fright!” His eyes glowed red beneath his signature soldier’s hat – it looked like Mika had been zombie-fied, just like the cats! He was joined by an army of Pikes staff gone wrong, as more vampires, monsters and demons joined the terrifying throng. She screamed and ran upstairs – a rookie horror movie mistake, one we didn’t think the heroine of this story would make!

In all of our rooms, there was nowhere to hide; the floorboards were creaking, the taxidermy was alive. With the creepy crew looming, Dawn had no choice but to jump, and she landed on top of our own garbage dump. As she rose from the rubble, like a phoenix from the flames, Dawn suddenly remembered the reason she’d came. She needed to get to Room 27, to talk sense into those ghosts in rock and roll heaven. Avoiding the zombies, the ghosts and the ghouls, she managed to make her way back to the pool. And just when she thought the end was in sight, a sharp flash of lightning pierced through the night. 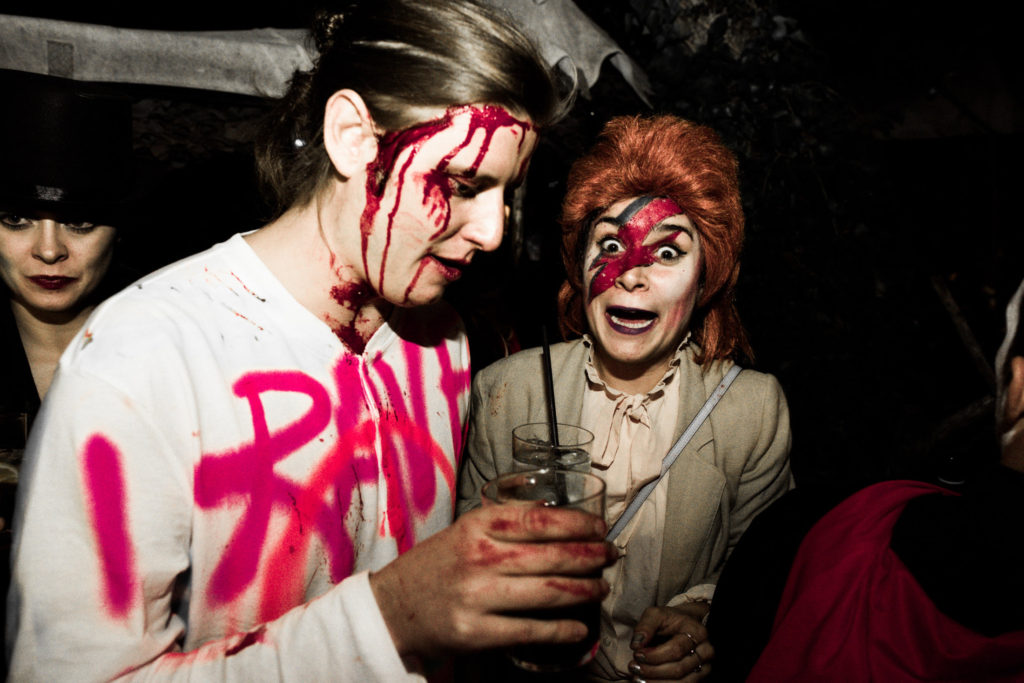 An eerie white glow came from the Rockovery Dome, and Dawn thought it might be ET trying to phone home. Then she heard a blood curdling scream come from down that way, and she bolted across the tennis court in an attempt to get away. But there was nowhere to run, there was nowhere to hide – although if she climbed into the giant rollerskate, she could hide out inside! As Dawn scaled the oversized wheels and climbed up the laces, she spotted not one, but two familiar faces. The Brothers Grim could be seen over on the reception lawn; this was a huge relief for our Dawn.

As she stealthily crawled from the court to the grass, Dawn suddenly wondered if this too was a farce? Would The Brothers help her find her way to the room, or would they simply send her to impending doom? She didn’t know who to trust, what was real, or what to believe, but as for her mission, she was still determined to achieve. This was it – the last hurdle, and so Dawn ran for her life – through the pool, through the bar, through all the trouble and strife. She arrived at Room 27, and banged on the door. “Please help me!” she cried loudly. “I can’t take it any more!” 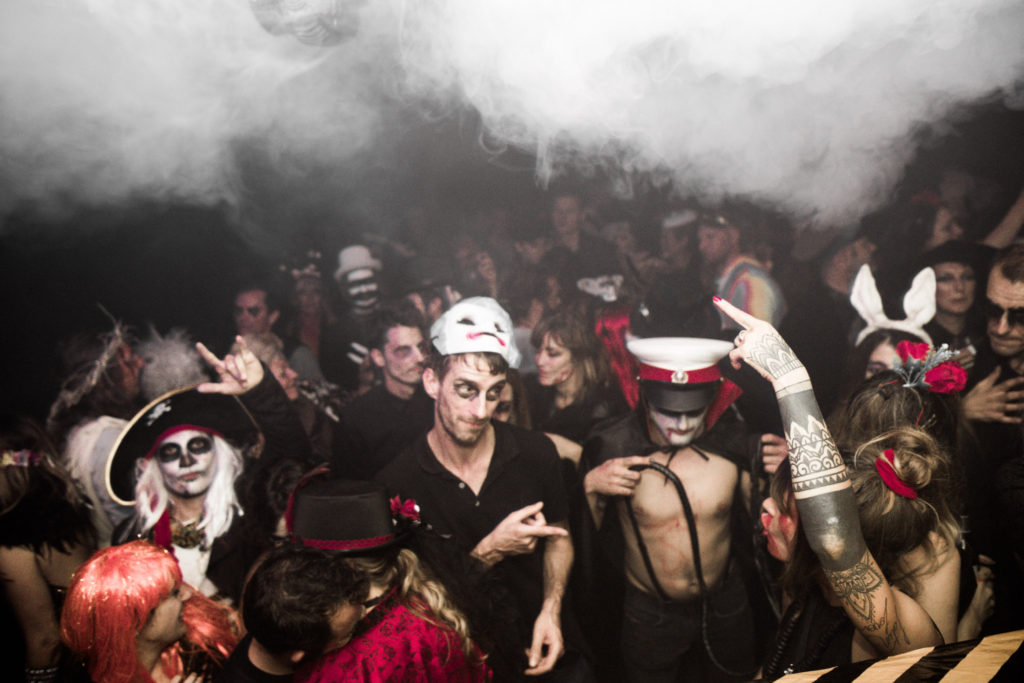 The winds got even wilder, ripping trees out by their roots; the Pikes roof started shaking – just like Dawn was trembling in her boots. All around her wolves were howling amidst piercing screams – everything that happens in your very worst dreams. She put her ear to the door to eavesdrop on our supernatural friends, very aware that any minute might be her untimely end. But alas, there was silence behind that thick door – Dawn wasn’t sure if they were in there any more. She pulled out her master key and turned the lock, opening the door and preparing for a shock.

As she pushed open the door, everything came to a halt – the wild wind, the torrential rain, the crazy lightning bolts. Dawn stepped inside the room and the Pikes world returned to normal. No ghosts, no spirits, no specters, nothing remotely paranormal. Brother Mark and Brother Andrew passed by to wish her well – there was nothing in their manner that made them seem under a spell. Dawn rubbed her eyes and stepped outside, reminded of The Wizard of Oz. Just like Dorothy before her, everything was the same as it ever was. “There’s no place like home,” Dawn said, finally realising what her fantastical journey had been about. It’s like our entrance says: You can check in, but you can never check out…

A Dance With the Devil

Please note, Pikes car park will be CLOSED for the Halloween event. Do not drive to Pikes – either take a TAXI (and we’ll swap your receipt for a shot at the door!) or use our FREE Park & Ride Shuttle Service.