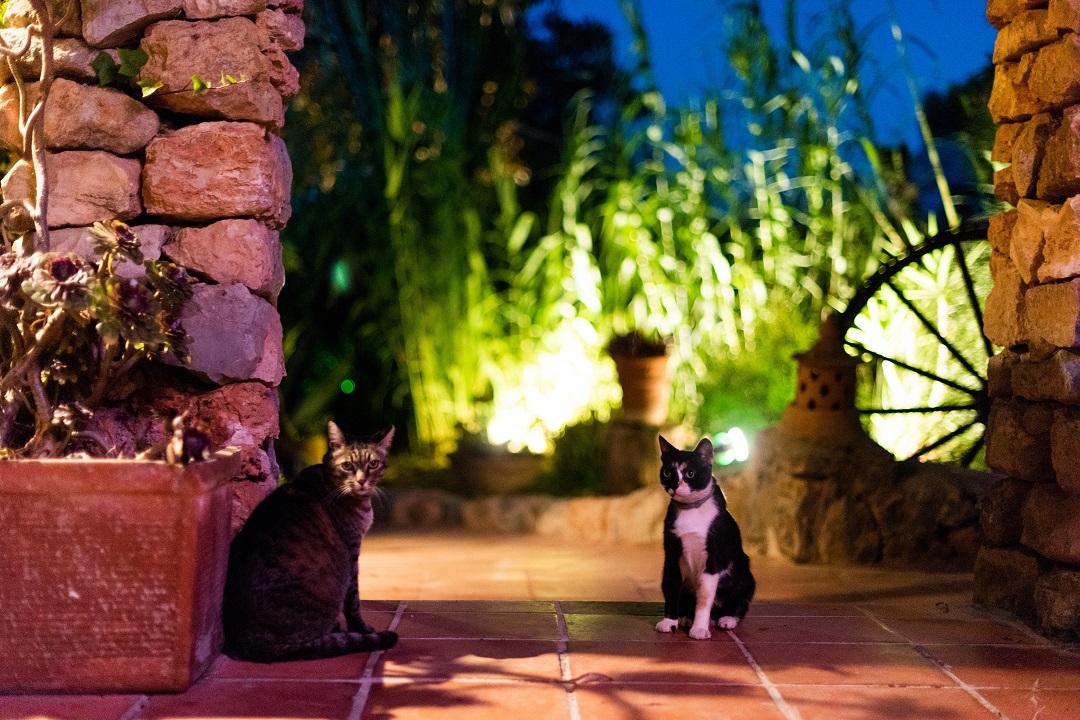 Meet the Cats of Pikes

Pikes is referred to as a rabbit hole time and time again, but in reality, the hotel is much more of a cat haven. Nothing against bunnies of course, we just prefer pets of the feline persuasion! Anyone who’s spent time immersed in our world knows our little clan of furry friends are very important to us – they’re part of our family and we can’t imagine a day at Pikes without their whiskered little faces and cute personality quirks keeping us entertained.

Yes, we said it. Our cats have ‘personalities’. Over the years, we (along with many of our guests) have fallen under the spells of these magical little creatures – all of whom made the choice to come and live at Pikes of their own accord. What were once wild cats have been happily tamed and are now our beloved house cats. Now sit back and relax as we contribute to the never-ending stream of cat content on the internet by telling you their unique stories… 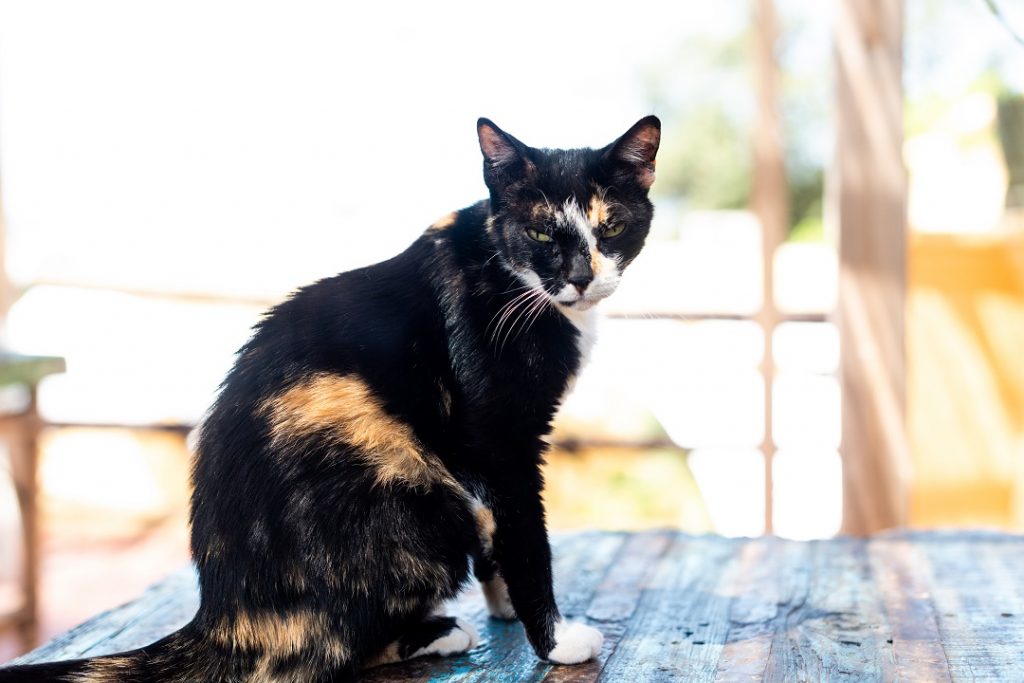 Teensy tiny Pikey is around nine years old and she was the first cat to declare Pikes her home in 2010, when Ibiza Rocks first took over the hotel. At the time, there were a lot of feral cats in the surrounding area and we worked closely with a local charity to have them rehomed, however this determined little calico quickly found her way back onto the property. We found Pikey sneaking around searching for food and then discovered she had kittens hidden nearby in a bush. Our head chef at the time adopted the two kitties (hurrah for happy endings!) and we decided Pikey could stay with us – after a trip to the vet to be neutered, to ensure we wouldn’t be overrun with more kittens.

Pikey quickly adopted Tony Pike as her human companion – she is devoted to him with all her feline heart. She may be the smallest of our cats, she could even be the sweetest, but she is definitely also the smartest. She knows how to
get into each and every one of our 25 rooms, even when they’re locked up for the winter! Pikey is full of love and purrs all the time – she’s always happy to be stroked by our guests. It’s nice to see still has a little wild streak in her, as she’s also the best hunter of our entire clowder. She was once spotted successfully hunting a rabbit that was the same size as her – who are we to argue? It’s just the circle of life.

Beautiful white and black-tufted Blossom found us a year or so after Pikey moved in and like her predecessor, she fell in love with Tony at first sight. It’s no secret Tony has a way with the ladies, one which seems to extend to other
species (insert inappropriate pussy jokes here). Blossom was a little kitten when she first arrived and it seemed she’d been abandoned – we found her huddling behind a big freezer unit as we were closing down for the winter. Tony took her to the vet and nursed her to full health and for the first few years, she wouldn’t socialise with anyone other than her master.

She’s such a special, gentle little soul, and in the early days, little Pikey would bully her away from their food trays as she exerted her authority and mark her Tony territory. Ultimately, Blossom found her strength and now the two behave like sisters – they’re always together. You couldn’t dream of a more loyal companion than Blossom. When Tony leaves the hotel to go out to dinner or to a party, Blossom walks with him to the front gate and sits there waiting for him until he arrives home – even if that happens to be 6am the next morning. She’ll sit patiently in the restaurant while Tony takes his breakfast or lunch and later at the bar as he mingles with guests, then when he eventually goes off to bed, she’s right there by his side. True love. 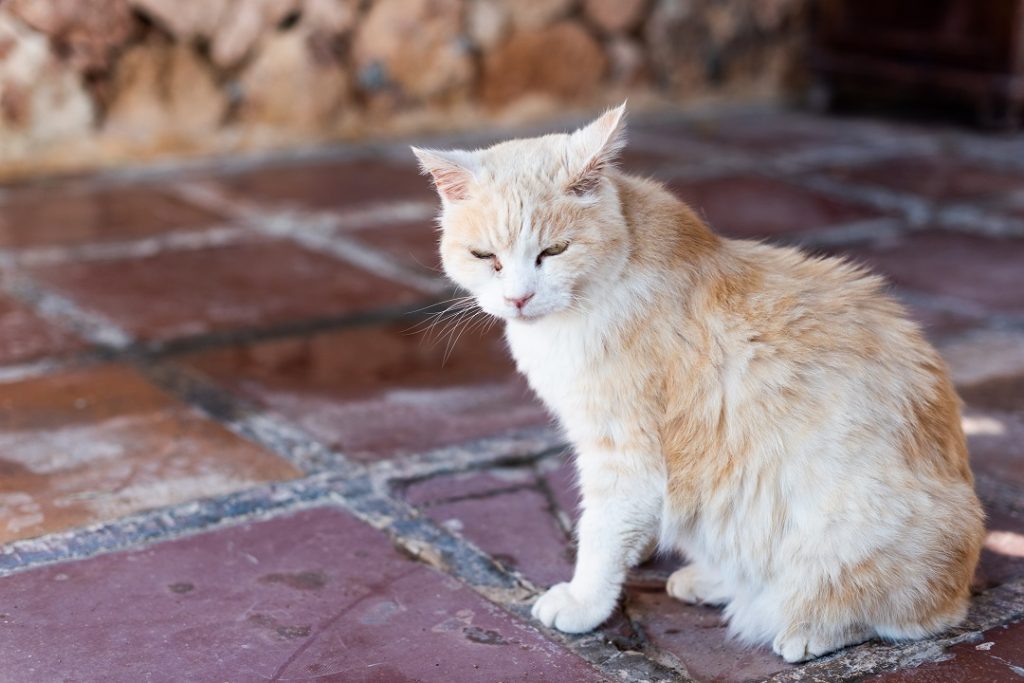 This majestic ginger tomcat arrived on our doorstep in the winter of 2017 and he was very, very poorly – at one point we didn’t think he was going to make it. Thankfully, Mika persevered and nurtured him with food and love, so Sneezy decided to stay with us. We called the vet to treat him and he was in very good health, though his sensitive respiratory system still made him sneeze a lot, hence his name! He was around 17 years old, so we’re happy he chose Pikes to be his retirement home.

He very quickly became the much-loved king of reception, never venturing far from the action and never happier than when snuggled up to Mariola. RIP Sneezy, you will be sorely missed! 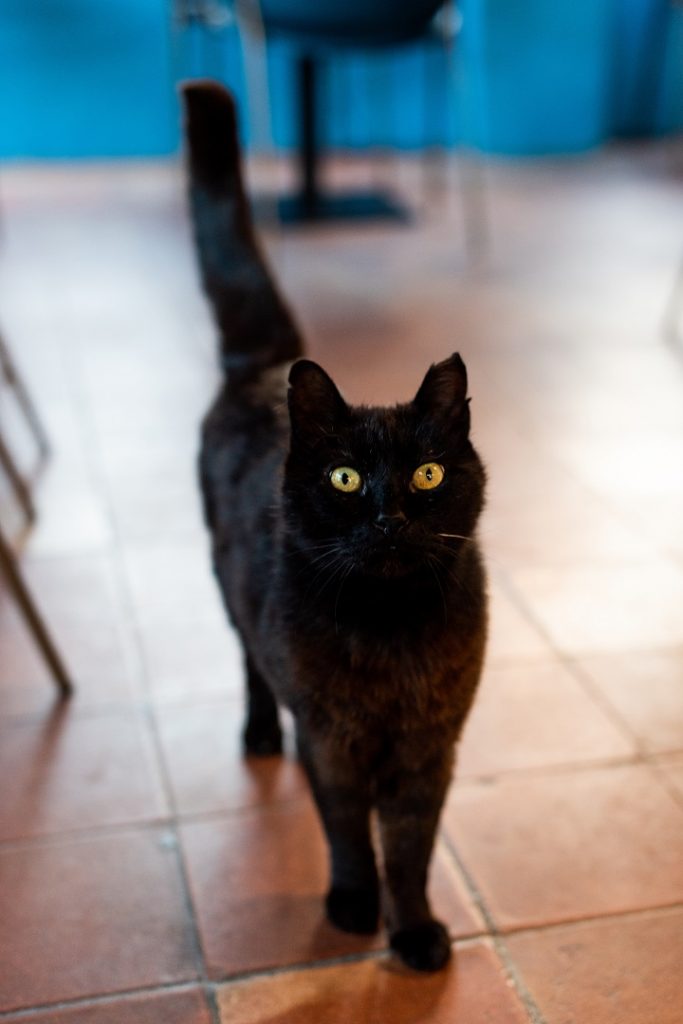 Our black beauty Zorro seems to lead a double life, though it took us a while to work this out! He arrived quite a few years ago in early May and very quickly adapted to the laid-back Pikes way of life. He was already neutered and seemed to be quite well-fed, but he voluntarily took up permanent residence as part of our feline family. Zorro is most partial to a Sunday roast (who can blame him?) and you’ll often see him mooching around guests in a ploy to score some beef or chicken bites. He’s so comfortable around people he even lets us stroke his tummy, which is almost unheard of in cats. You’ll see Zorro at every single party these days – music and food are part of his daily life, just like ours.

The way we found out about Zorro’s double life was when our (now dearly departed) good friend Howard Marks hosted an event by our pool in 2015. One of our neighbours came to the party, looked at our friendly big black cat and said: “That’s my cat!” Mariola (our resident cat lady) assured her he’d been with us for two years, and it turned out, he’d been missing for the same amount of time! Thankfully, she was pleased to see him happy in his new home and agreed he should stay. Unlike our other cats who live with us all year round, Zorro only stays with us during the summer months – we think he has yet another winter home somewhere nearby! He returns to Pikes around the end of May (just in time for the Pikes on Sunday opening – maybe he smells the beef roasting in the oven), always well-fed and happy, then stays with us the whole summer before heading off again as we shut up shop in November! We hope his ‘other’ owners don’t miss him too much. 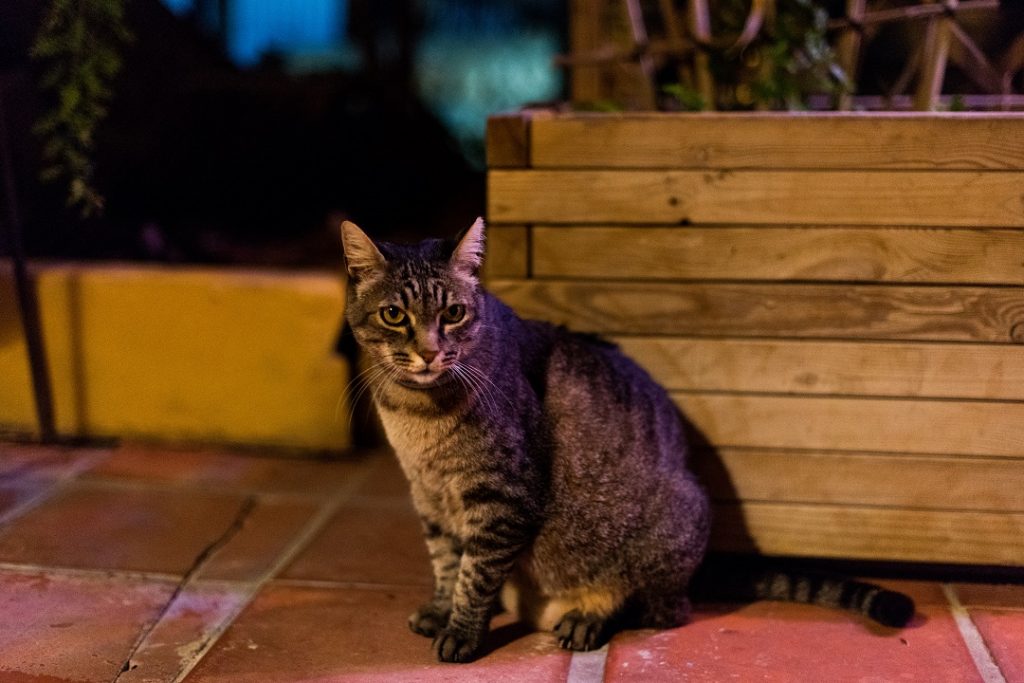 There was a funny case of mistaken identity when it came to our most recent addition, Tiger. This gorgeous grey striped tabby came to Pikes as a stray around three or four years ago and fell in love with our maintenance manager Juanjo, who lives here in the winter months. Very quickly after his arrival, Tiger put on a LOT of weight and we started to think she was pregnant. A trip to the vet uncovered the fact she was indeed a he – just a very fat and happy one!

Tiger has remained with us – and also remained quite chubby thanks to his penchant for food – ever since. His unrivalled passion for Juanjo is still obvious – he follows him around the hotel grounds like a love-struck teenager. All of our cats live harmoniously together here at Pikes – they respect each other and all know their place within the hotel. We take care of them all year round (except for the mysterious Zorro!) and now have a lovely vet who does house visits, so we don’t have to frighten them by putting them in cages – they all still possess a little wild spirit after all. That’s why we think they chose us… we have that in common! 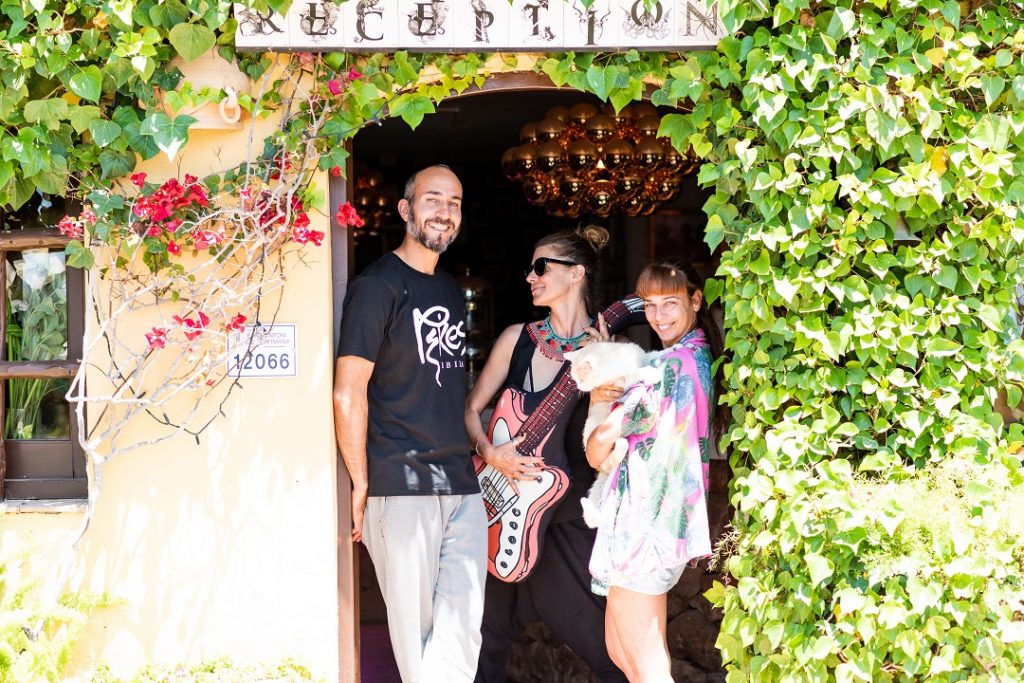 Last but not least, we cannot finish without an honorary mention of Mucho Meow. This pretty little princess was known for winning the hearts of guests in rooms 1, 2, and 3 – including DJ Harvey, who became very fond of her while he was staying with us – where she liked to spend her time. She was a talkative creature – hence the name – and would always ‘mew’ in reply to any question you asked her.

Last year, one of our customers fell head over heels in love with Mucho Meow and asked if she could adopt her. At first, the thought was breaking our cat- loving hearts (particularly Mariola’s) but ultimately, we could see the bond between them was strong and knew she’d go on to have a well-deserved amazing life in her new home. With the help of Care 4 Cats – Ibiza’s cat charity – we arranged for Mucho Meow to be transported to the UK and now we receive a stream of photo updates showing the little princess, who has grown into a queen, living it up in her new home. We miss you Mucho Meow!