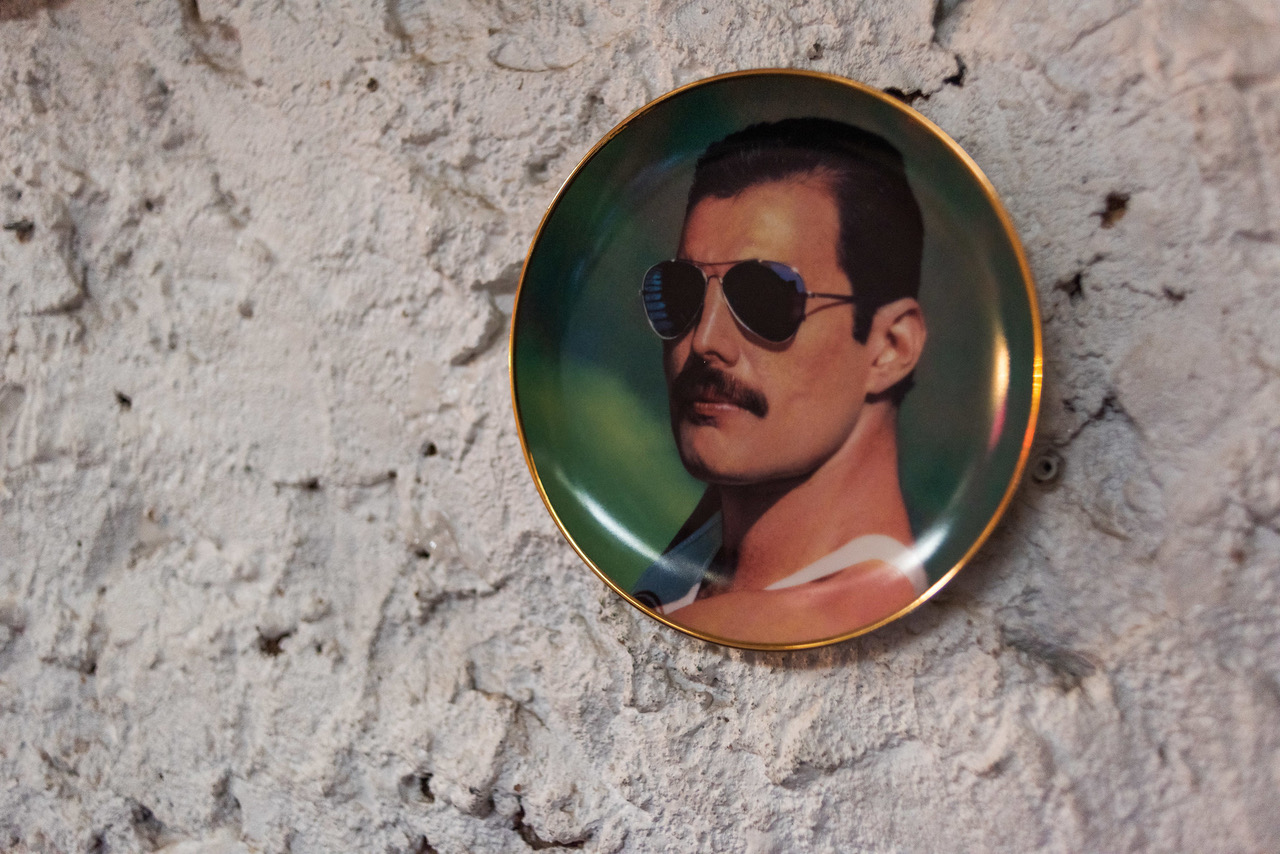 ARE YOU READY FOR THIS FREDDIE?

It’s absolutely no secret that Freddie Mercury played a huge part in building the legend of Pikes back in the 1980s, and if you’ve ever stayed with us, or partied with us, you’ll know we do our best to honour the great man’s memory throughout the hotel. His photos are emblazoned all over our walls, not to mention on our bed linens, curtains and upholstery; there are poolside cocktails named in his honour; you’ll find kitsch Queen memorabilia peppered throughout the hotel grounds, and of course, our club space was named in homage to his penchant for that particular room. The icing on the cake is Freddie Rocks – the huge day to night charity extravaganza we throw in honour of Mercury’s birthday each year, raising money for the Mercury Phoenix Trust – which is just around the corner on Sunday September 1, 2019.

It’s easy to get inspired for the ninth edition of Freddie Rocks just by taking a walk around the hotel. Starting in reception, where you can see evidence one of the defining moments in Pikes history with your very own eyes – the photo of Freddie cutting the cake at his legendary 41st birthday party in the summer of 1987. The photo, by the way, was taken by our longest-serving member of staff, our bartender Emil, as Tony had enforced a ‘no camera’ rule for partygoers. Freddie himself had originally ordered a cake in the shape of Gaudi’s Sagrada Familia, that was flown over from Barcelona to Ibiza in his private jet – the plane had such a bumpy landing the cake was destroyed, so Tony came to the rescue and found a baker on the island who could make a two-metre sheet cake for 500 people at the last minute – the one you see here in the photo. Not that many people ate it, according to legend! 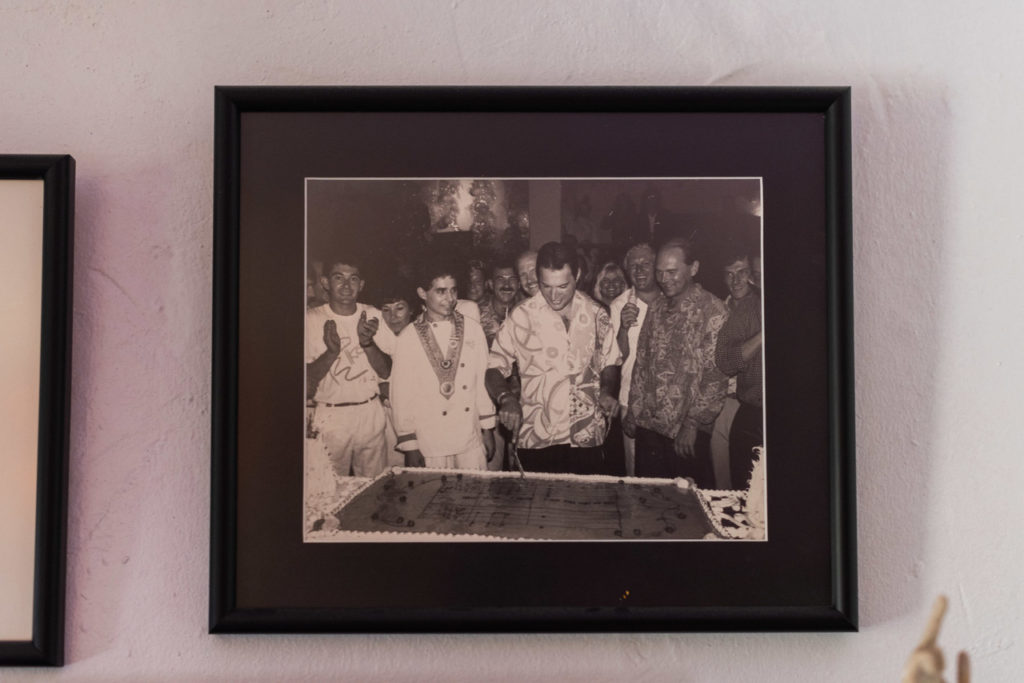 “I want a party that will be remembered in Ibiza history and be talked about all over the world,” Freddie said to Tony, when planning that event – a mission that was well and truly accomplished. While we know Freddie’s posthumous birthday parties at Pikes may never be as outlandish as that event (blame the licensing laws, not us!), we still do our best to make sure it’s worthy of the phenomenal performer’s legacy. This year would have marked Freddie’s 73rd birthday and we’re pulling out all the stops. As always, we’ll be enforcing the ‘no tash, no entry’ rule – but don’t worry, we can help you draw one on if you don’t come prepared. As always, there’s a requested minimum donation of 10€ on the door – donated directly to the Mercury Phoenix Trust – and we’ve got special guest DJ joining us in Freddies that we’re not allowed to announce yet, but who we know you’re going to love. Watch this space.

It’s inside Freddies where you’ll find one of our favourite items of Freddie Mercury memorabilia – multiples, as a matter of fact. What’s the collective noun for a group of collectible Freddie Mercury plates? These limited edition porcelain pieces were a gift to us from our dear friend DJ Harvey, and a bit of digging has taught us that these were made in the early 2000s (does that make them vintage yet?) by Danbury Mint to commemorate the artist and that there’s only 5000 of them in the world. Apparently there are another eight designs out there in the world… do you think we could find room for them on the walls if we could acquire them? How much Freddie is too much Freddie? 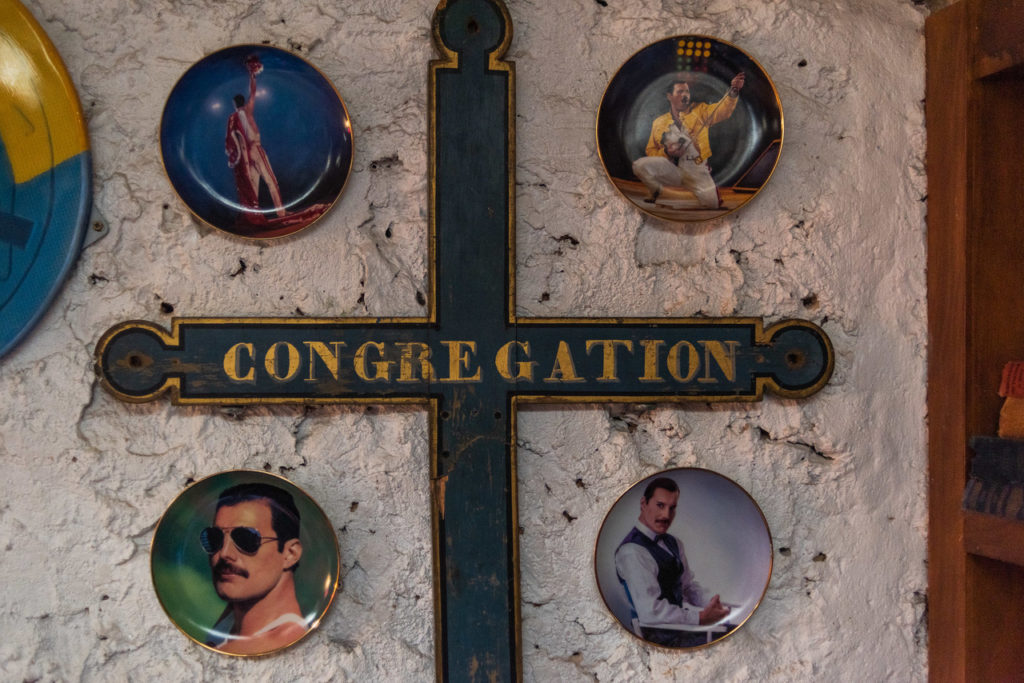 Of course, that’s a rhetorical question, as this year seems to be the year of (yet another) Freddie resurgence thanks to the award-winning biopic Bohemian Rhapsody, and the incredible portrayal of Freddie by Academy Award, BAFTA, Golden Globe and SAG winning actor Rami Malek. It seemed only fitting to screen the film during Freddie Rocks this year, and so we’ll be holding a special open-air cinema on our hot pink tennis court – a place where Freddie was known to bat a few balls – in collaboration with our friends at Cinema Paradiso. Tickets are 25€ per person, which will be donated to the Mercury Phoenix Trust, and are limited – so snap yours up via our website now. On the subject of tennis, we’ve also gotten hold of the tennis racket Freddie used in his games against Tony – it’s currently being restored, so keep your eyes out in the weeks to come! ‘Freddie loved the fact we had a tennis court at Pikes,’ wrote Tony in his book Mr Pikes. ‘But he was rubbish at it!’

Sleeping with Freddie is something all of our guests get to do when they check-in at Pikes, as his image has been immortalised (alongside many of other our famous guests and friends) on our custom-designed linens and wallpaper, made by Rockett St George. Depending on which room you’ve booked, you may framed snaps of Mr Mercury in the bathroom, or on the walls, but there’s one room that has the pièce de résistance for Queen fans. You see, inside Room 27 is an original Queen flight case, that once lugged Freddie Mercury’s microphone stand and mixer around the world. It was a gift to us from another Freddies regular and a member of the extended Pikes family, Artwork. Arthur came across the case in a music store on his travels, and when he told the store owner about the heritage of Pikes and Freddie, they both agreed it should come to live with us. Now purely decorative, you can it as a seat, a table, a luggage tray… or for whatever other purpose you think is most fitting of the artist’s legacy. 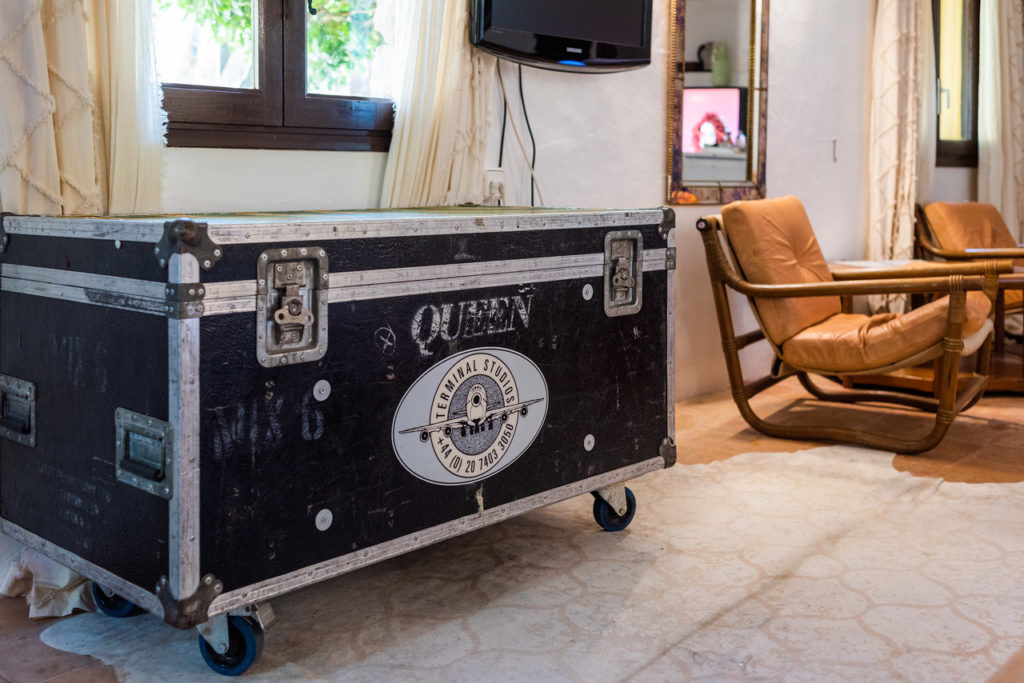 It was Freddie’s bandmates, Roger Taylor (who popped in to visit us and reminisce about old times earlier this year) and Brian May plus band manager Jim Beach, who launched the Mercury Phoenix Trust in his honour back in 1992, and last year we raised over 10,000€ euros for the charity at Freddie Rocks. Of course, we’re hoping to top that in 2019 and with that in mind, we’ve found a way for Pikes lovers and Freddie fans to contribute to our fundraising efforts, even if you can’t be with us for the Freddie Rocks party (although we hope you can!). Super talented artist and glass gilder Alex May Hughes – who is responsible for the collection of amazing new signs we have all over the hotel – has designed, created and very generously donated a one-of-a-kind Freddie Mercury-inspired piece that will be raffled off online as part of this year’s event. 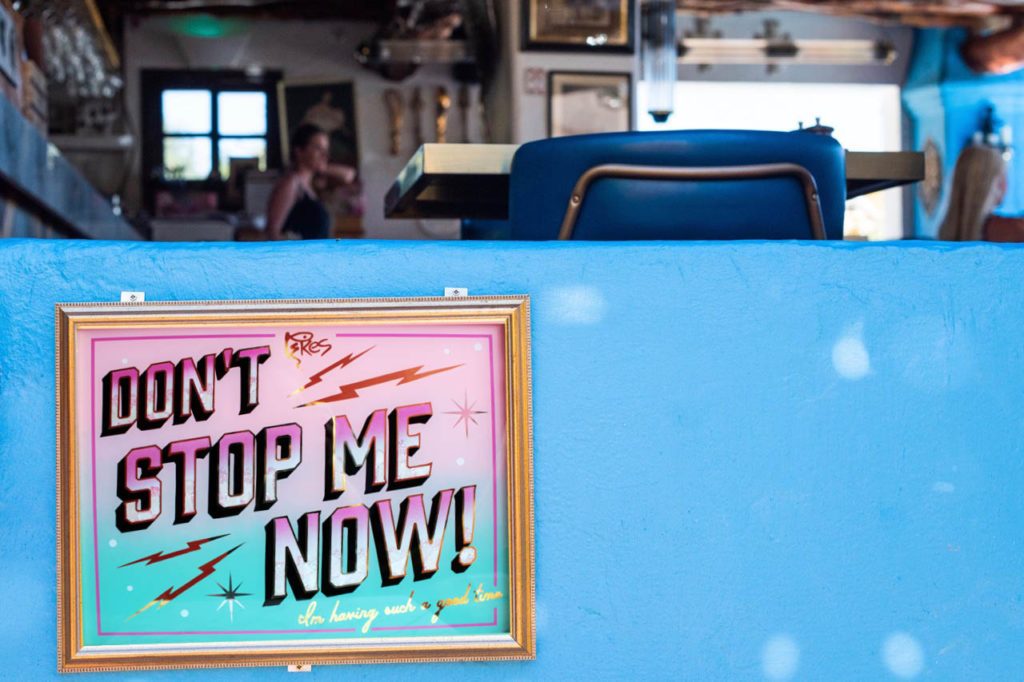 “I chose the lyrics because it’s my favourite Queen song,” Alex explains of her inspiration for the vibrant piece, which is 45cm x 35cm and was made using 23-carat gold leaf, 12-carat white gold, mother of pearl shell and iridescent glitter. “I felt the lyrics embodied the ‘show must go on’ spirit of Freddie Rocks. I wanted to keep the colours bright and playful, and even a little OTT.” As much as we’d love to keep this one hanging in pride of place in Freddies, we’re dedicated to the cause – all we ask is that the winner sends us a photo of it hanging in their own home. You can purchase a ticket in the raffle (as many as you’d like!) via the Freddie Rocks event page on our website and the winner will be drawn at random on the day of the event. As an aside, Alex will also be doing a pop-up exhibition at Pikes in the week following the event, should you like to talk to her about a custom commission.

There are plenty more reasons to embrace the ‘Freddie for a day’ theme at Freddie Rocks this year – we’ve got MC Mark Jones presiding over the fancy dress event, Freddies residents Paul Linney, Lynda K and Rob Green are on musical duties in Chez Fez, we’ve got a pop-up tattoo parlour courtesy of Wildfire Tattoo Collective – spearheaded by Sarina Taylor and Manuela Gray, who also happens to be the official tattooist of Queen’s Roger Taylor (will he make another appearance on the day? You’ll have to be there to find out!), and last of all, for those who prefer their Freddie souvenir to be a little less permanent (or painful), our good friend Donna Ganley of Starlover has designed a custom Freddie Rocks tee that will be available to purchase on the day of the event. 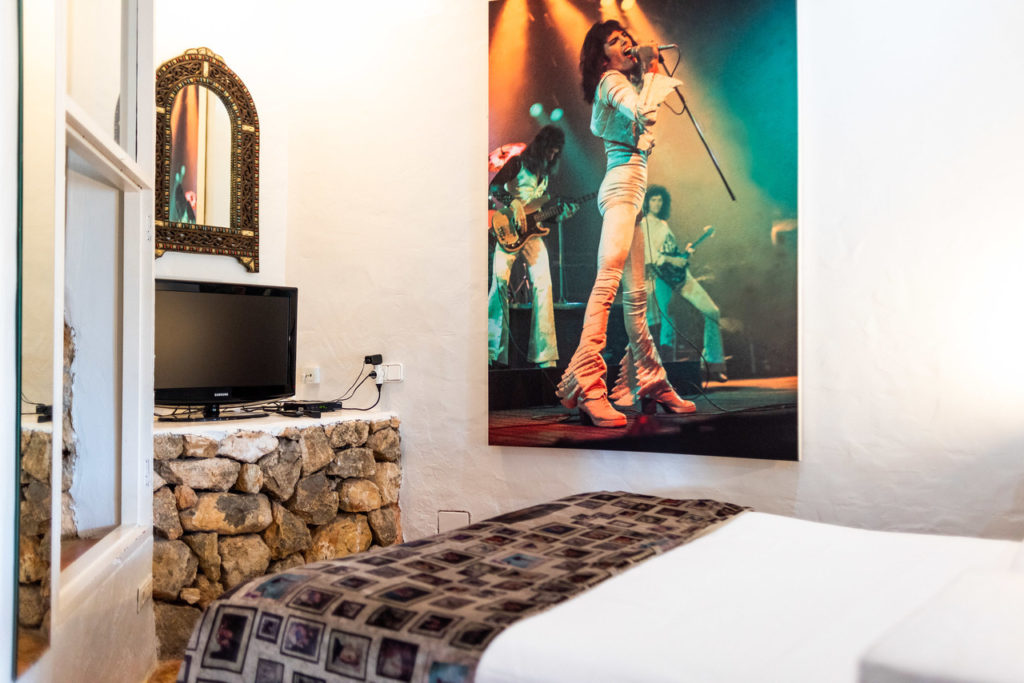 Thanks to his enduring friendship with late hotel founder Tony Pike, Freddie Mercury and Pikes will forever be intertwined. This year will sadly be the first Freddie Rocks event without Tony propping up our bar and sharing his firsthand Freddie stories, but it’s somewhat comforting to imagine the two of them reunited somewhere out there in the universe, together once again to celebrate this occasion in true Pikes style. Let’s do them both justice – the show must go on! 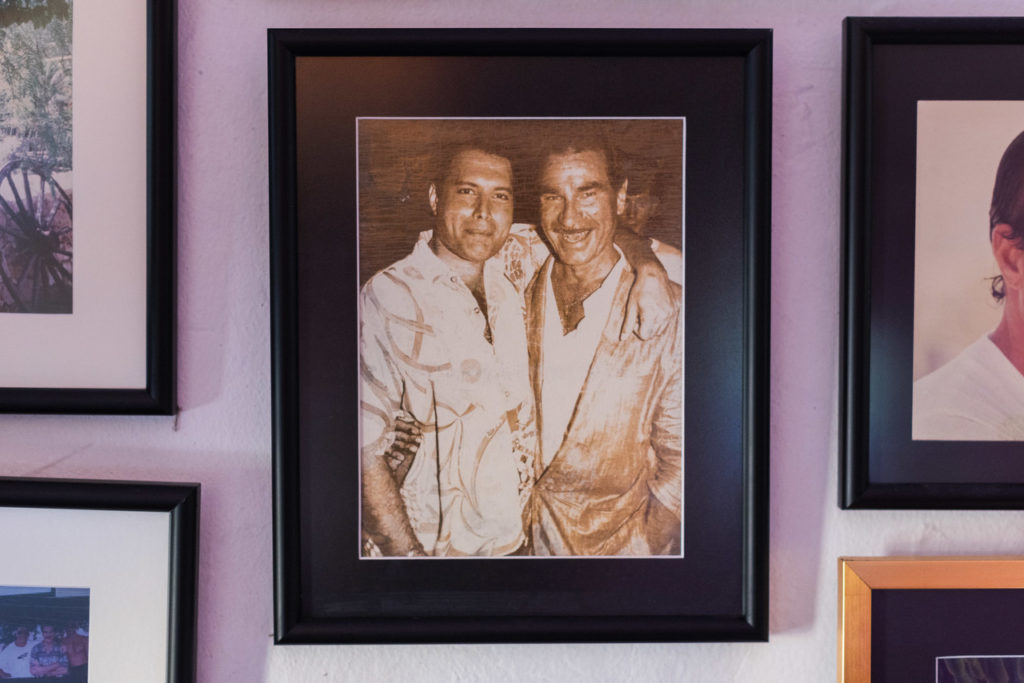