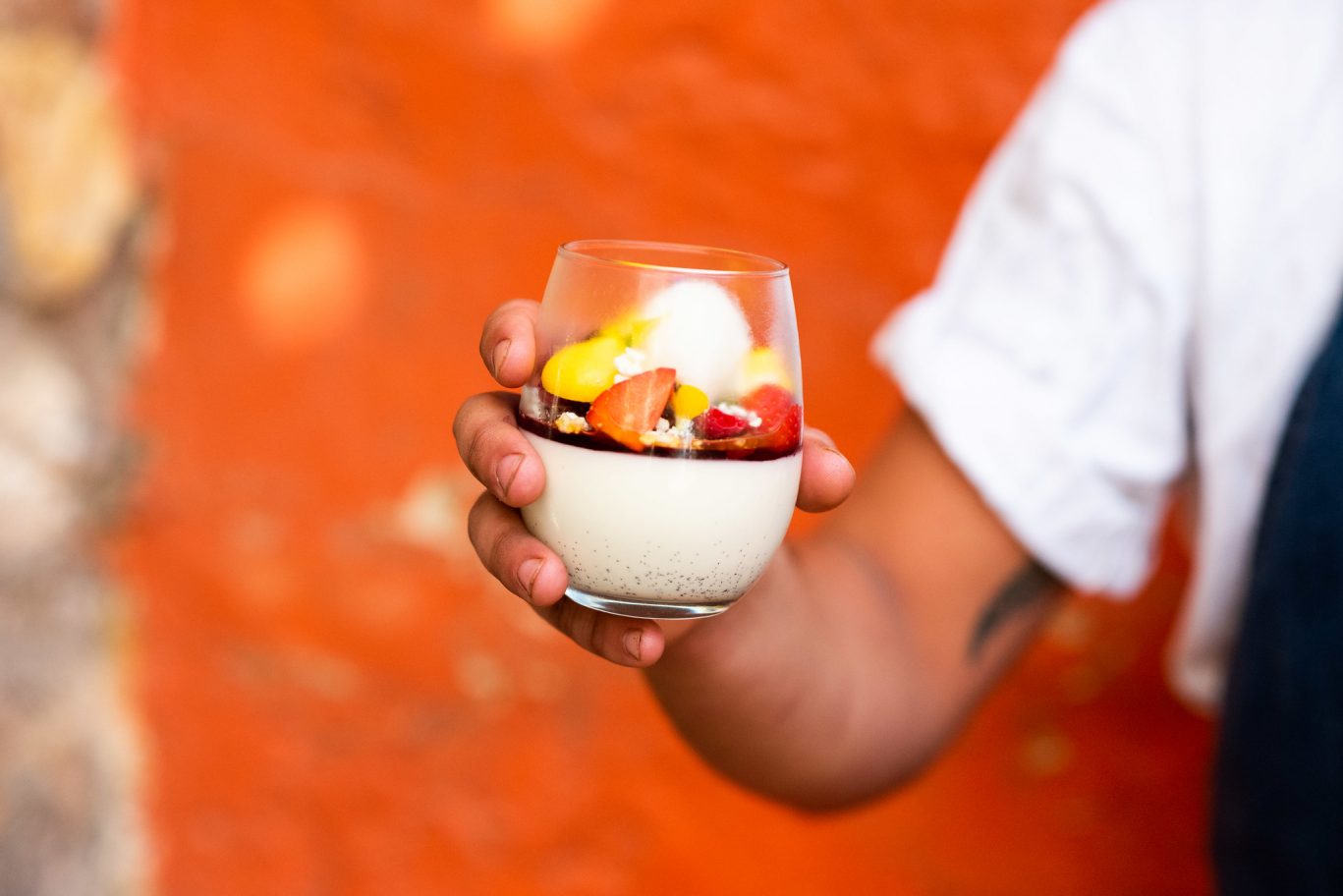 How Sweet He Is…

Our pastry chef Will Miles

There’s an old saying that cooking is an art, and baking is a science, but those who’ve eaten their way through to the end of the Room 39 menu may beg to differ. You see, while the delicate flavours and perfect consistencies of our desserts pay tribute to the scientific skills of the baker behind them, each dish is also presented like a painstakingly crafted work of art. The man behind the precision and magic is our passionate pastry chef Will Miles – how sweet he is…

At the tender age of 24, Will is the baby of the kitchen, yet he possesses the skills and talent of someone who’s spent a lifetime in the kitchen. Becoming a chef was never part of his plan, growing up in Bromley, East London. A skilled rugby player, Will was heading towards a career as a professional sportsman when at 17, an injury he sustained while touring Australia and New Zealand put him on the bench permanently. Suddenly, he needed work – he’d had a part-time job washing dishes during school, so going back to the kitchen made sense, but this time, he stepped into the role of chef. 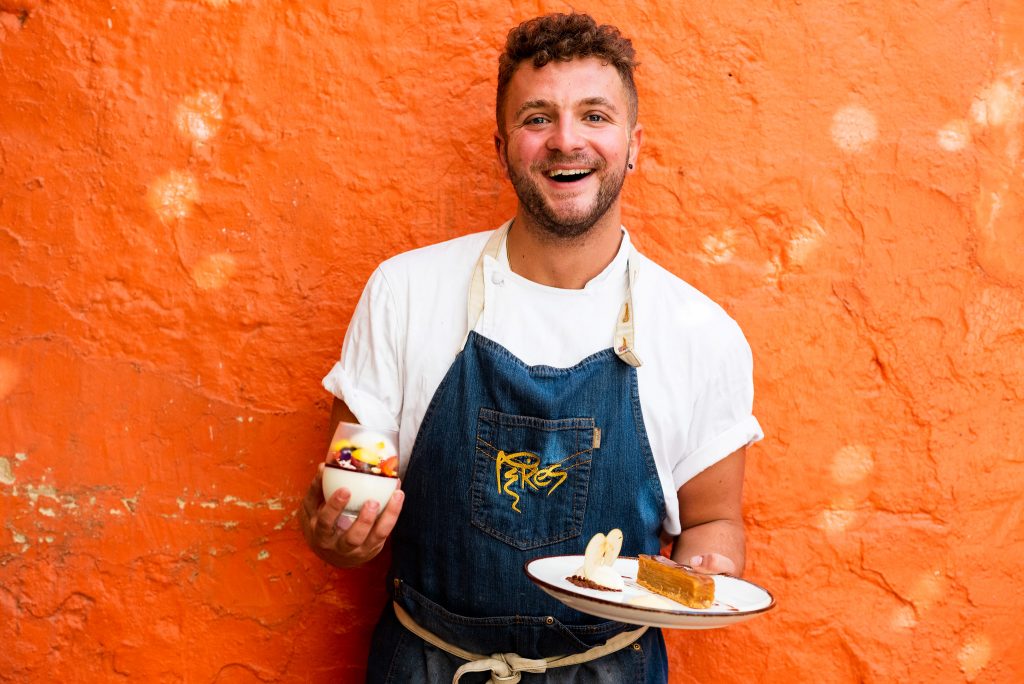 “I’ve always been into my food,” Will confesses. “My mum was a food writer and she was a very good cook herself, so the influence was there. I just didn’t think of it as a career until I stumbled into it.” After returning to the UK with a newfound passion for cooking, he enrolled in the Westminster Kingsway College and spent two years honing his skills in the culinary arts, focusing purely on patisserie. “I was always drawn to the artistic side of pastry,” he says, admitting he can be quite critical of other pastry chefs when eating in other restaurants – an occupational hazard, no doubt. “And I do have a sweet tooth!”

After college, he followed the classic chef’s path into the world of Michelin restaurants, via a series of stages (pronounced stah-ges darlings – it’s nothing like a cooking show!) at the renowned Chapter One and Le Manoir. A stage is somewhat like an unpaid apprenticeship – the chef volunteers for a certain period of time, in exchange for being taught the innovative techniques and vanguard cuisine styles to expand his own skills. In between stages, Will worked in the French Alps and eventually found himself craving some serious summertime. Ibiza was calling and a former colleague put him in touch with our head chef Lee Milne, who recognised Will’s potential and welcomed him into the Pikes kitchen in 2018. 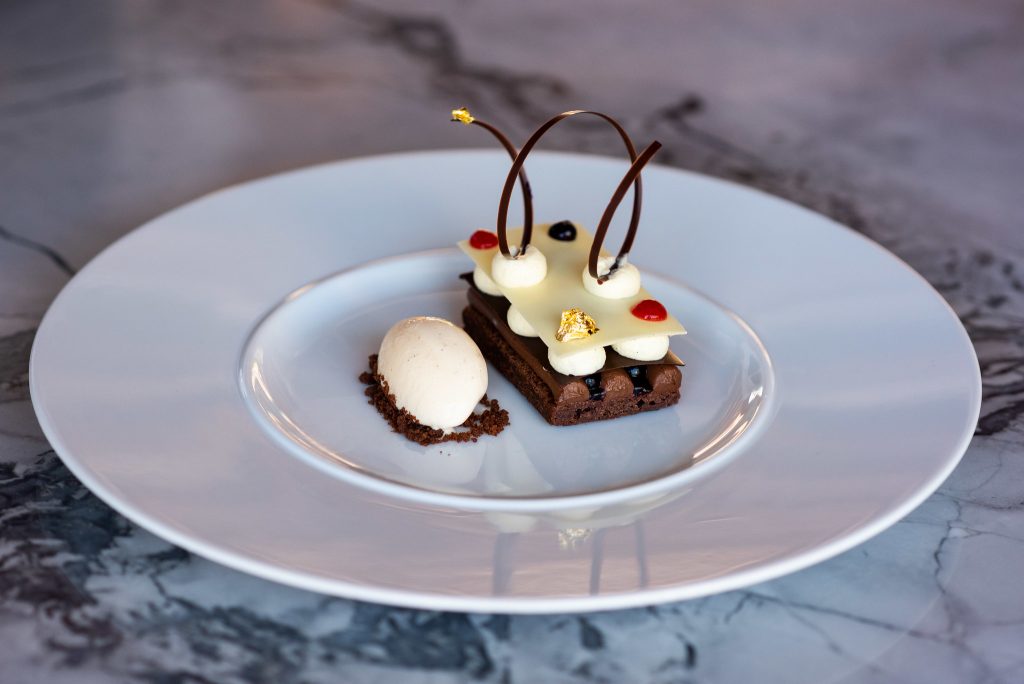 In just one short season, Will made an indelible mark on the Pikes menus– his desserts won the hearts of many a diner in Room 39, not to mention visiting press and local foodies. Last year, his focus took him on a journey through the past (egg custard tart and baked Alaska being two of the standout dishes) while this season has seen him embrace his own creativity and take inspiration from some of the world’s most cutting-edge pâtissiers. The 2019 dessert menu displays a level of delicacy and finesse that one would expect from a Michelin kitchen, while at the same time perfectly complementing the creations of the main menu. Oh, and did we mention he also makes a selection of homemade ice creams?

The chocolate mille feuille is truly a culinary masterpiece – it also happens to be Will’s favourite from the current menu. Elegant tempered chocolate swirls with gold foil tips balance delicately atop layers of chocolate and peanut butter cremeaux, and white chocolate and vanilla ganache, the sweetness countered with just the right amount of tartness from cherry and strawberry gel – offset with homemade vanilla ice cream perched on crispy chocolate sand, it’s a medley of sweet tastes and textures that is quite difficult to share. 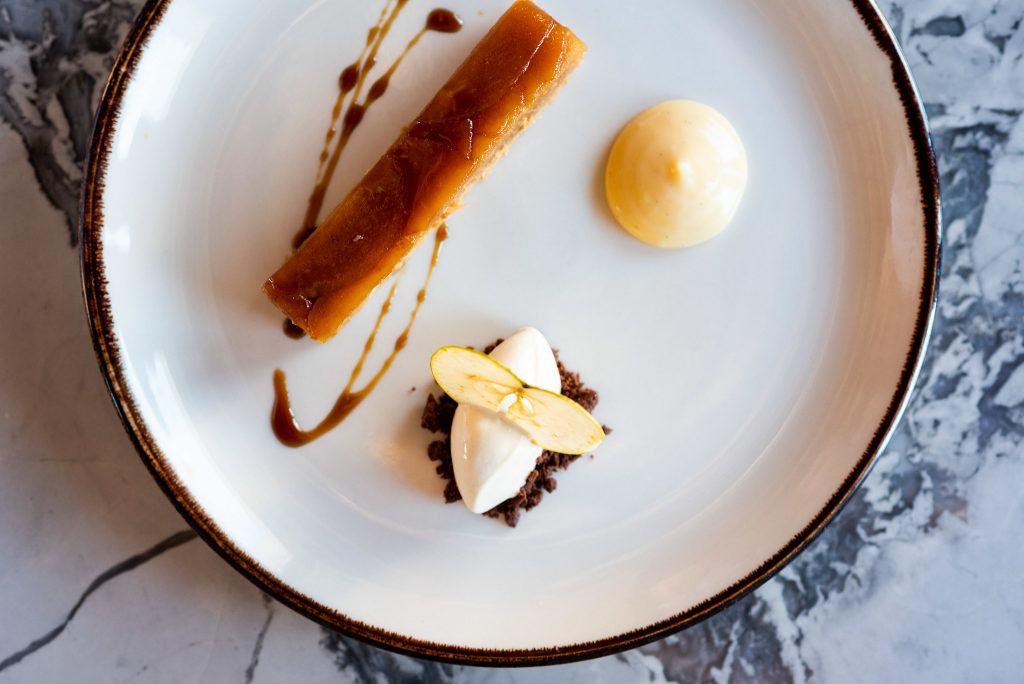 Those who love a classic dessert should order Will’s take on the traditional apple tarte tatin – a layer of puff pastry topped with layers of pressed apples slices with a dusting of homemade caramel powder between each one. Glazed with muscovado and apple juice and served with crème patissiere (the fancy name for custard) and a scoop of homemade gingerbread ice cream with a fiery fresh ginger kick.

Another classic to get a Room 39 makeover courtesy of Will is the Italian favourite, panna cotta. Rather than a wobbly cup of pale creamy goodness, ours is more like a beautiful sculpture – starting with the sweet vanilla panna cotta at the bottom, Will dresses the dessert with a fine layer of freshly made jus de fres (sweet strawberry syrup), followed by perfectly placed fresh raspberries and strawberries, lovely little yellow and white citrus meringue drops and finished with a scoop of homemade lemon sorbet. Every mouthful is a taste sensation. 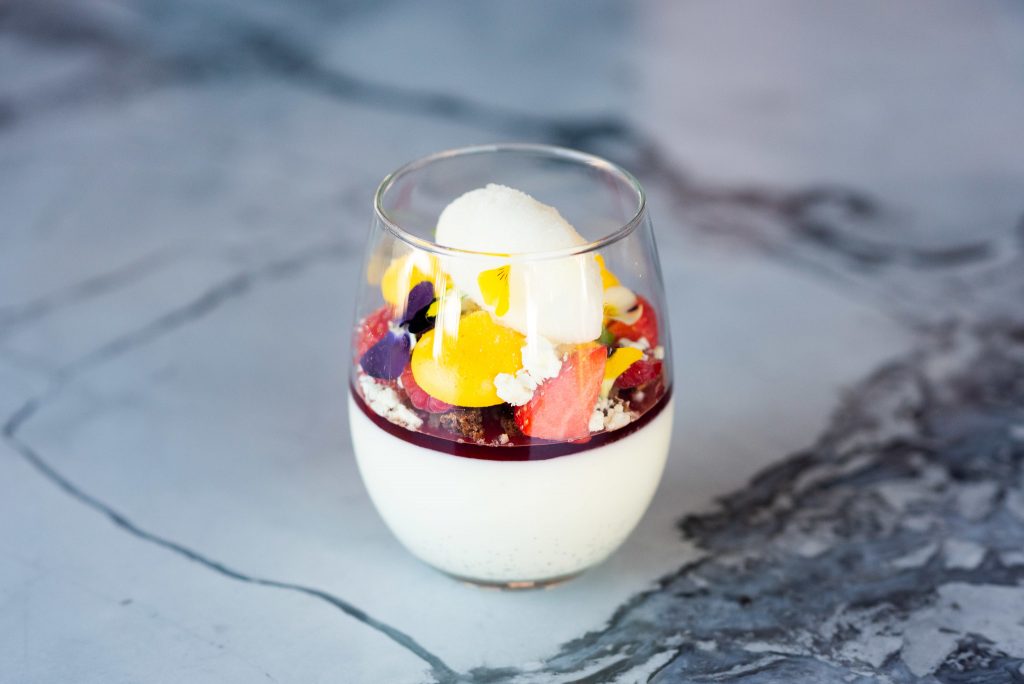 Finally, Will’s ice cream flavours are something to behold. Vanilla, chocolate, gingerbread, crème fraîche, strawberry sorbet, lemon sorbet, vegan banana, vegan chocolate… experimenting with flavour combinations is something Will thoroughly enjoys, so expect to see his repertoire of ice cream flavours expand as the season goes on. “It’s nice to be able to change things up,” Will says. “When we work on special events like Ronnie Scott’s, and even with the Sunday roast, I get a chance to try out new things.”

Speaking of new things, Will is currently in cahoots with Lee and our creative director Dawn Hindle, as the trio dream up an all-new Pikes afternoon tea menu – set to launch on Wednesdays in July 2019. While we don’t want to give too much away just yet, we can tell you that he’s drawing on some quintessentially British tea traditions (think tiered tea stands brimming with classic finger sandwiches, scones, cakes, petit fours and gasp! We’ve said too much already) and has been digging deep into the archives for inspirational recipes. But that’s another blog… 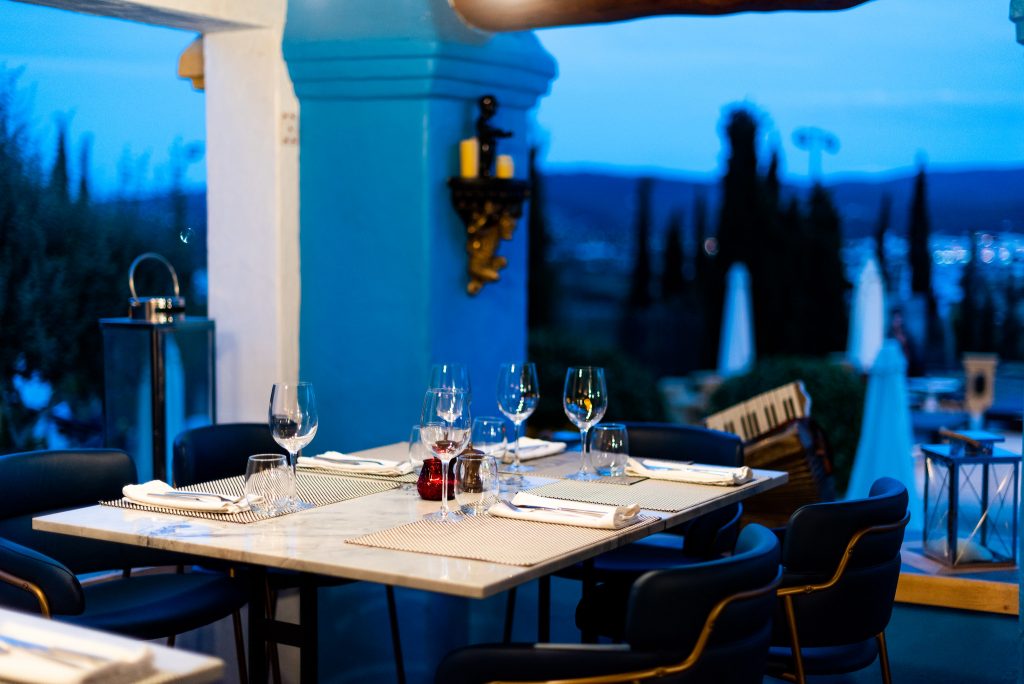 At the forefront of his field in Ibiza, and at such a young age, we were, of course, a little worried that young Will’s career aspirations may take him out of our kitchen and up onto the world stage. Thankfully for us however, he’s become such an integral part of the Pikes family, he sees himself staying firmly put for a long time to come. “I just don’t think I could work anywhere else now,” he says “Pikes is a hotel like no other. We’re really like a family.” Instead, he sees the off-season as a chance to explore the world’s best restaurants (11 Madison Park is currently on his radar) and do some more stages with his culinary heroes. The legendary Antonio Bachour – who’s currently considered the world’s best pastry chef – and Peter Gilmore of Quay Restaurant, the man behind that nitrogen-fuelled ‘snow egg’ dessert in Sydney, Australia, are the chefs he aspires to learn from most.

For now, it’s all about Room 39 and ensuring that every diner who leaves the restaurant takes a sweet memory of their experience with them. “I just think a dessert is the perfect way to end any meal,” Will explains. “You always have to remember as a pastry chef, that your dish is the last thing a customer has eaten before they leave the restaurant.” It’s a big responsibility, but we think think he’ll get his just desserts…