Room 27 is the former residence of our founder

This time last year, the world lost a legend when Pikes founder Tony Pike passed away peacefully in his sleep on February 24, 2019. We did our best to honour Tony throughout the season that followed – it was the first year the hotel would ever run without the infamous self-proclaimed Aussie (Tony was born in the UK but every bit an Antipodean) pulling up a pew by the pool to regale guests with tales of his hedonistic, debaucherous and most fascinating past, and yet his presence was so strongly felt in every corner – more than ever before. Tony Pike was the very epitome of the phrase emblazoned on the building in our car park: You can check in, but you can never check out.

A year on from Tony’s passing, we are now preparing to enter the 2020 season, continuing to honour Tony’s legacy in everything that we do. One of the questions we’ve often been asked over the past year was whatever happened to Tony’s room at Pikes? You see, when Tony first rented the Pikes to the Ibiza Rocks Group in 2011, one of the stipulations of the deal was that he would always have a permanent room on the premises, in addition to his meals and drinks at the bar. After five years, he sold the hotel to Dawn Hindle and Andy McKay, who agreed to continue honouring this agreement until the eventual time Tony passed away. ‘It was the right time to sell. I wasn’t getting any younger,” Tony was known to quip about the handover and the sweet deal. 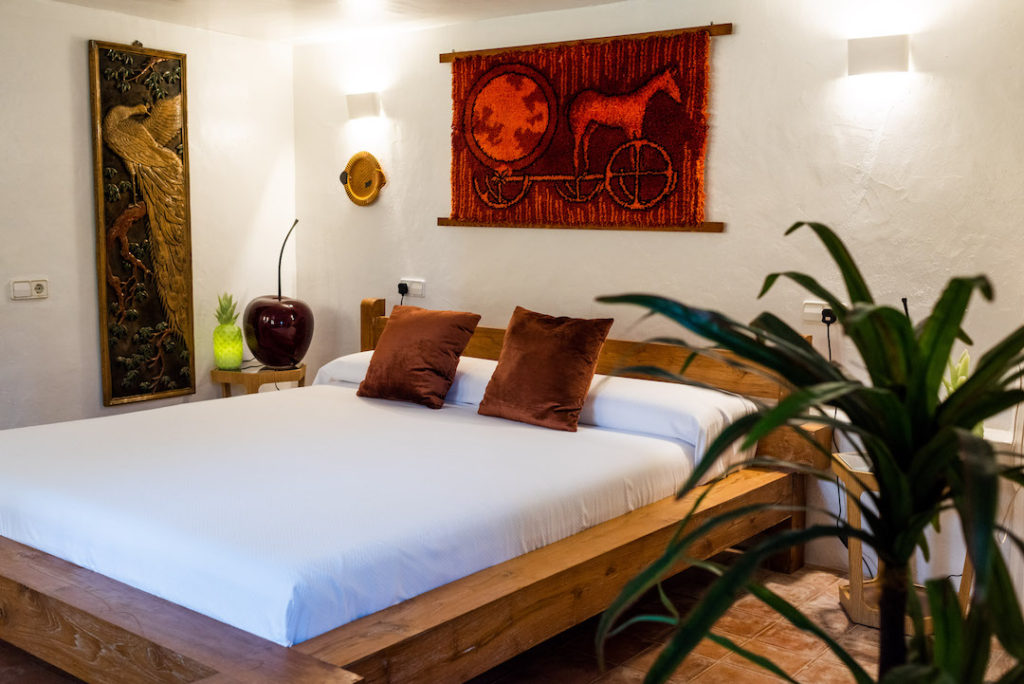 With much respect to his love and passion for the hotel he had built with his bare hands, Tony was offered his pick of suites in the hotel to choose from, but being a true a businessman – despite his obvious and well-documented penchant for pleasure – he opted for one of the humble, private rooms at the very back of the hotel. ‘I was happy to take one of the smaller rooms,’ Tony wrote in his memoir, Mr Pikes. ‘I don’t need one of the larger or more prominent ones. The hotel needs to make money and needs its best rooms available for business. And so, a private little space – accessed via a pathway through the ornate wooden gates just off the pool, between Rooms 24 and 25 – became his home (along with his cats Pikey and Blossom) for the next few years, and as we’ve often said – if those walls could talk!

Our friend and resident DJ Artwork commented on Tony’s lifetime residency deal in a recent interview: “Tony Pike completely won at life,” he said. “To build that place up, and to have a caveat when you sell it that says you get a free room, meals and bar for the rest of your life so you can just mooch around telling your stories – now that is fucking retirement.” And indeed, Tony did live out his days mooching around the pool, still charming the ladies – well into his 80s – and impressing the blokes, on occasion joining us in Freddies for a party, and even still jumping off the restaurant roof into the pool until his doctor finally forbade it (and the aches in his ageing body caused Tony to finally, if unwillingly, obey). 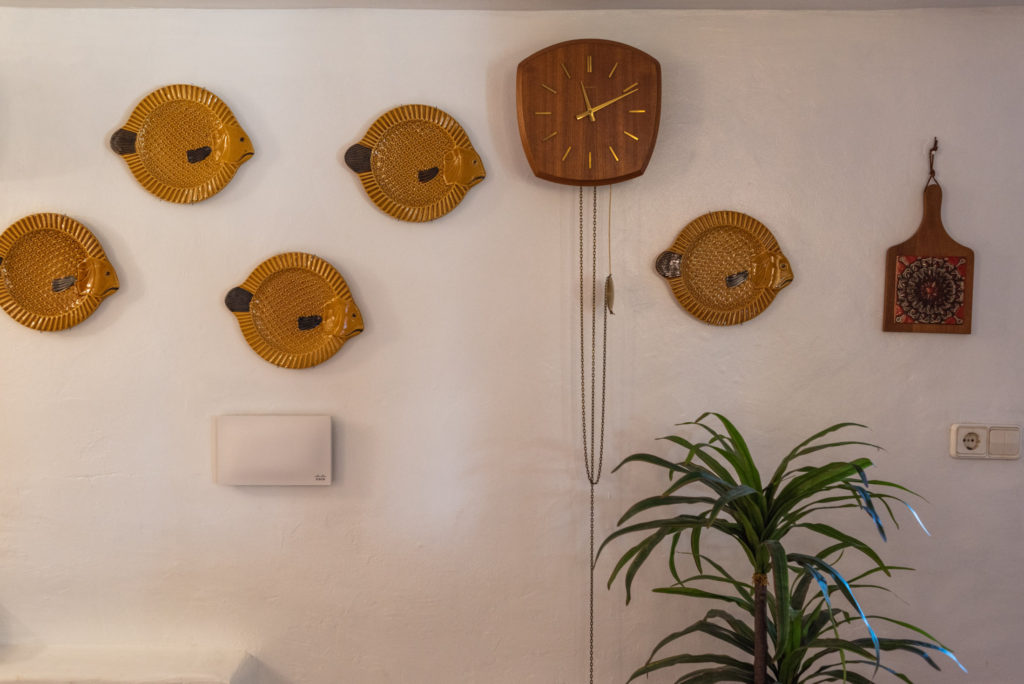 What many people may not know, is that at the end of summer 2018, Tony moved from Pikes to an assisted living facility of his own accord, Sa Residencia, just on the outskirts of Ibiza town (where he eventually passed away). Of course, he still visited to hotel regularly, and we always kept his room available for him, should he have wished to entertain, take a nap or stay overnight at any time. Ultimately however, the time did come when we were requested to pack up Tony’s belongings and send them over to his new home – and this is where things really get interesting! Our food and beverage manager, Steve Hughes, a long-time friend of Tony, took the responsibility on and headed into the room, not quite knowing what he was going to find.

Condoms and gimp masks and dildos, oh my! There was a veritable museum-slash-sex shop worth of titillating toys found all over Tony’s room – there was certainly no shame or sense of self-consciousness about our founder. Nothing was hidden under the bed, or tucked away in bedside tables; it was all over the room for the world to see (and the chosen ones to use). Steve, ever the trouper and a devoted friend, dutifully packed up his friend’s lifetime supply of extra-large condoms (Tony was often known to brag about the size of his manhood, it would seem he was not exaggerating) and carefully curated collection of sex toys, and delivered it to Sa Residencia as requested. We only wish we could have seen the look on the nurses’ faces when they helped unpack their new tenant’s possessions! 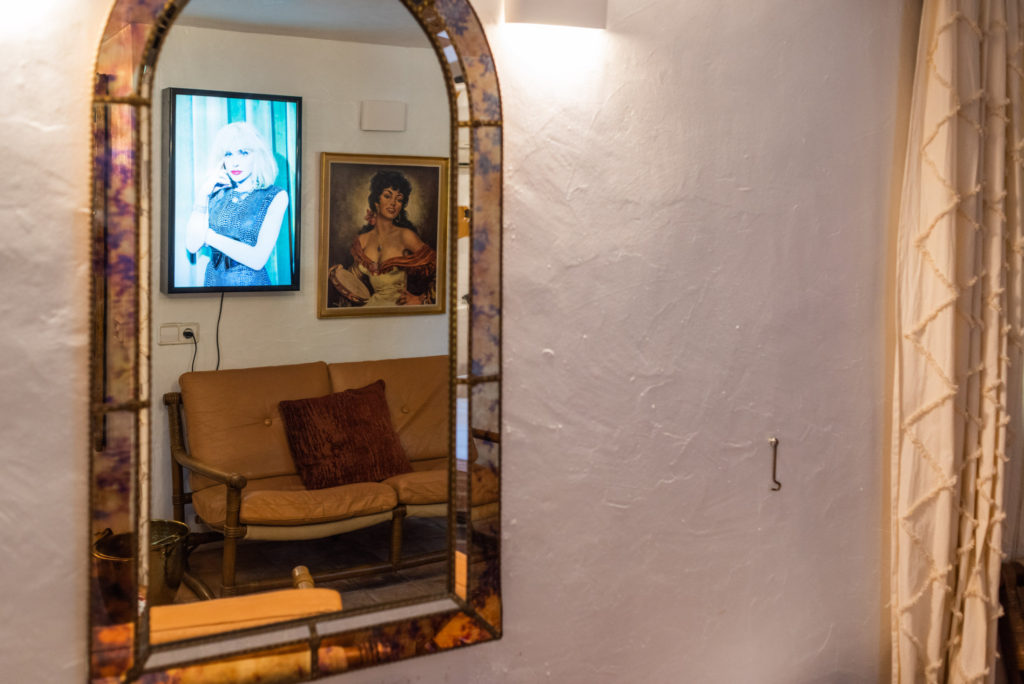 After Tony passed away, Pikes creative director Dawn Hindle knew she wanted to remodel the space, but with the intention to completely respect to its former resident. She went to work on the interior design by first imagining what kind of space Tony would have created for himself these days, if he’d still been able to build and design rooms at Pikes as he did during his heyday. First order of business was to knock some walls out, to give the room a feeling of more space and more light, turning it into more of a studio apartment style dwelling. Next, it was time to update some of the furnishings – but she knew not to stray too far in terms of era. Gentlemen of a certain age are known to have a fondness for the trends that were in style during their younger years, and so Dawn filled the space with stylish antiques, but pieces that also resonate with the trends of today.

Retro designer Scandinavian cane and leather sofas scattered with rich red and brown velvet cushions are reminiscent of a 1970s Playboy Mansion scene, while a huge animal hide rug at the foot of the enormous wooden bed means prevents cold feet when you get up in the middle of the night to pee (if you were an 86-year-old man, this would be important!). Gold-framed vintage mirrors mean you can get a good look at what’s happening in other parts of the room from wherever you’re sitting, and an array of quirky décor and art pieces line the walls – ranging from antique clocks and decorative fish plates to a tapestry of a horse (a nod to Tony’s past experience as a jockey) and an incredible bronzed peacock artwork inspired by Tony’s years spent in Asia. 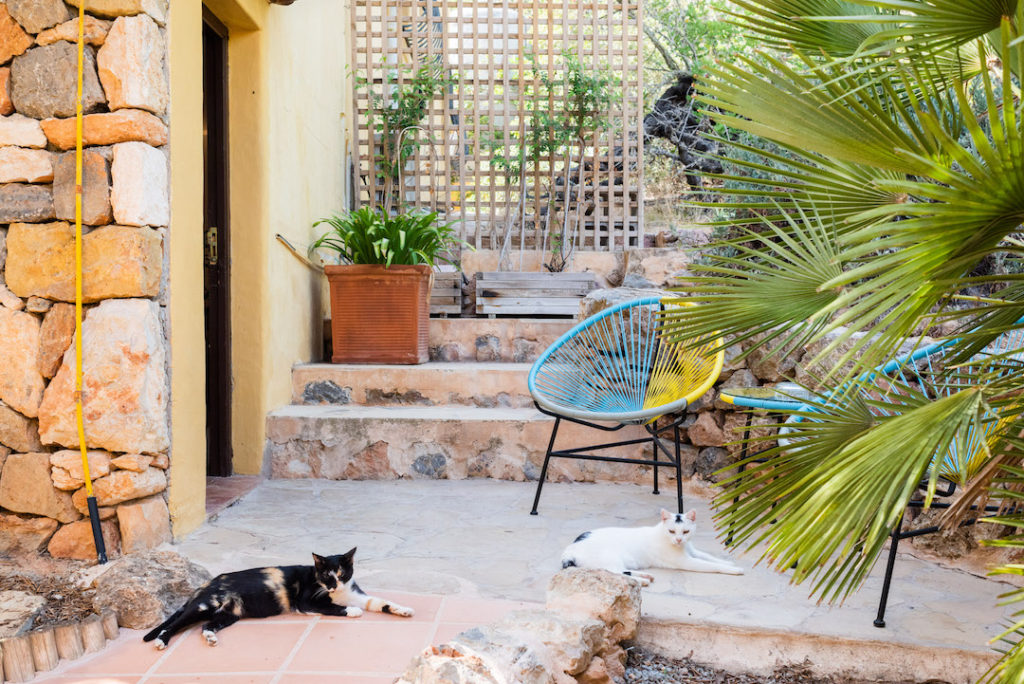 Giant glossy cherries complement the pineapple lamps on the nightstand, while Tony’s love of the ladies is acknowledged through two lightboxes showcasing photography by artist Diana Gomez – including one of the indelible Courtney Love which begs the question, did she and Tony have a connection? – alongside an oil painting of a busty stunner of a woman who looks a little like Gina Lollobrigida and Sophia Loren rolled into one. One of the star pieces in the room is an authentic Queen flight case that was once used to ship Freddie Mercury’s microphone and mixer around on their tours in the 80s – gifted to us from Artwork after he stumbled across it in a music shop.  The original marble countertop in the bathroom still stands with a Moroccan mirror above, adding to the retro charm and in line with Tony’s 1980s interior design style – all in all, the studio has the air of a retired rock star. It’s a little bit Venice Beach, a dash of Scandi cool and a whole lotta Tony Pike attitude.

Initially, after the renovation and out of respect to Tony’s memory, we didn’t make the room – which is now officially known as Room 27 around the hotel, but will likely be dubbed ‘Tony’s Room’ forever – available to the public. There were times however, when we were fully booked out, and Dawn would allow a small handful of people to stay there. This invitation extended only to friends of Tony, such as Artwork or DJ Harvey, plus some other long-time friends of Pikes. But with Tony’s sharp sense of business acumen in mind, we know he wouldn’t want the room to stay empty, or to become some kind of posthumous shrine – he’d want his beloved guests to enjoy the space – and so we’ve opened Room 27 up for bookings in 2020. Little Blossom and Pikey still like to lounge on the private patio area (you’re welcome to let them sleep in the room if you’re a cat person!) and it’s become the ultimate place to channel the spirit of Mr Pike. Next time you’re wondering ‘What would Tony do?’, there’s no doubt Room 27 can provide the answer.