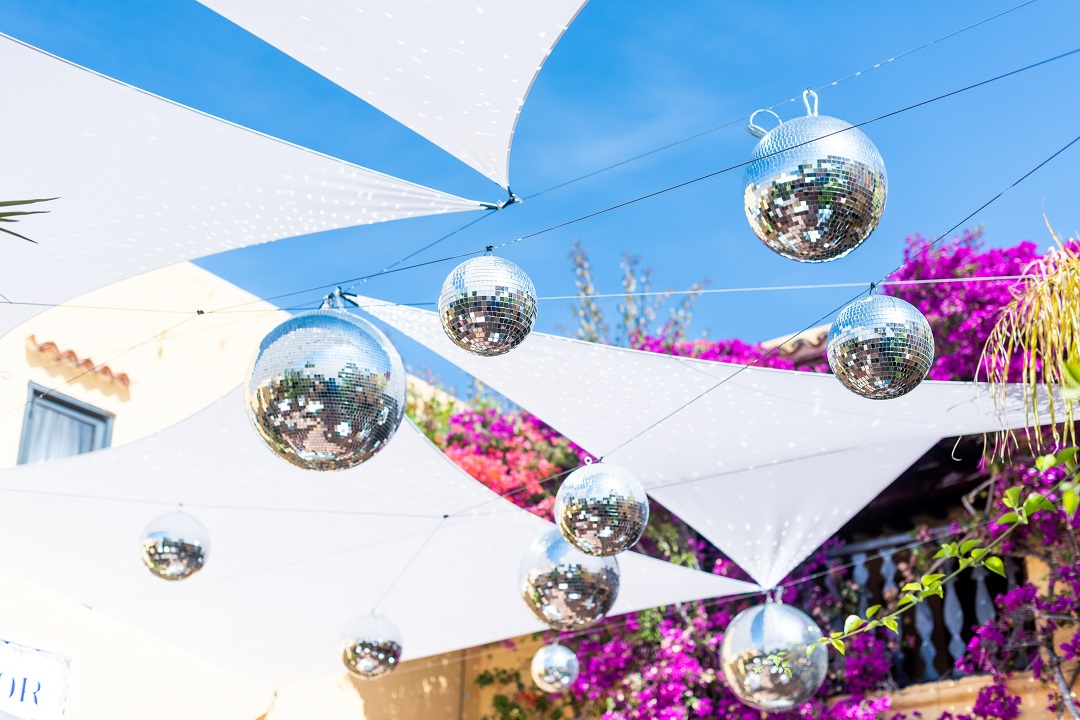 One of our favourite things about Pikes is you just never know who you’ll end up standing next to – by the pool, at the bar, in Freddie’s or even in the taxi queue at the end of the night. This season we’ve had visiting journalists, bloggers and presenters from media all over the globe – of course, we knew about some of them prior to their arrival (we don’t just let in any old TV crews or radio broadcasters after all!) but many of the others were a complete surprise; we only find out about their visits after they’ve written about us across their various platforms.

As we wrap up the 2018 summer season, and make our way through the press clippings, TV shows and online mentions, we’re flattered, humbled and oh-so-happy to see how many times we’ve been mentioned in the press this year! Thank you to all those publications who’ve shared the Pikes love with the world – come again soon… and be sure to say hello this time! To save you the time of sifting through Google, we’ve rounded up a little taster of what the world was saying about us for you – make yourself a cuppa, settle into your favourite comfy chair and happy reading! 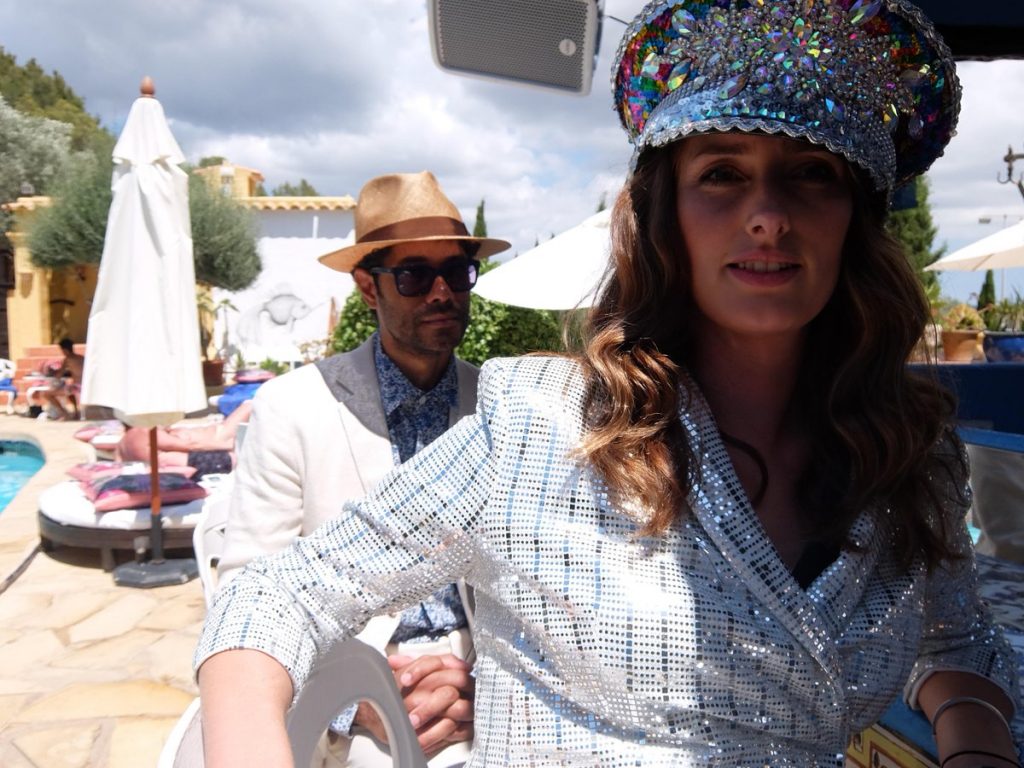 More than two million people tuned into Travel Man on Channel 4 when host Richard Ayoade enlisted writer and peformer Jessic Knappet for a 48-hour whirlwind tour of Ibiza. On the first night, the duo are greeted by a dapper looking Sunny as they check in to Pikes, before hitting the Boudoir, spending a night in Freddie’s and ordering our most expensive cocktail from our cunning mixologist Tanja. They’re last seen carrying The Crowning Glory (which is 100€ but intended to be shared by four to six people and comes served in a giant disco ball) shimmying into Freddie’s – interestingly, there are no clips of the morning after!

Pikes co-owners Andy McKay and Dawn Hindle were interviewed in episode two of BBC 4’s documentary Can You Feel It – How Dance Music Conquered the World – a show that took viewers inside the clubs and music that changed the world. As pioneers of the clubbing and dance music industry, the pair talk about their history, from the hedonistic days of Manumission and the ultimate launch of Ibiza Rocks, to their restoration of Pikes. A must-watch for anyone who loves music, Ibiza and Pikes.

WATCH ‘CAN YOU FEEL IT’

While it’s kind of cheating to call it television, when a video featuring Pikes has received more than 7.5 million views on Facebook and quite possibly double that on the website itself, something says it’s worth a watch! That video came courtesy of Vice, after the cutting edge media platform took a tour of the hotel, guided by none other than Tony himself. Be prepared folks, this one is seriously NSFW as the king of hedonism in Ibiza candidly discusses sex, drugs and finding the key to happiness. Be sure to keep your eyes peeled for some sweet little cameo appearances by Tony’s innocent little cat Blossom. 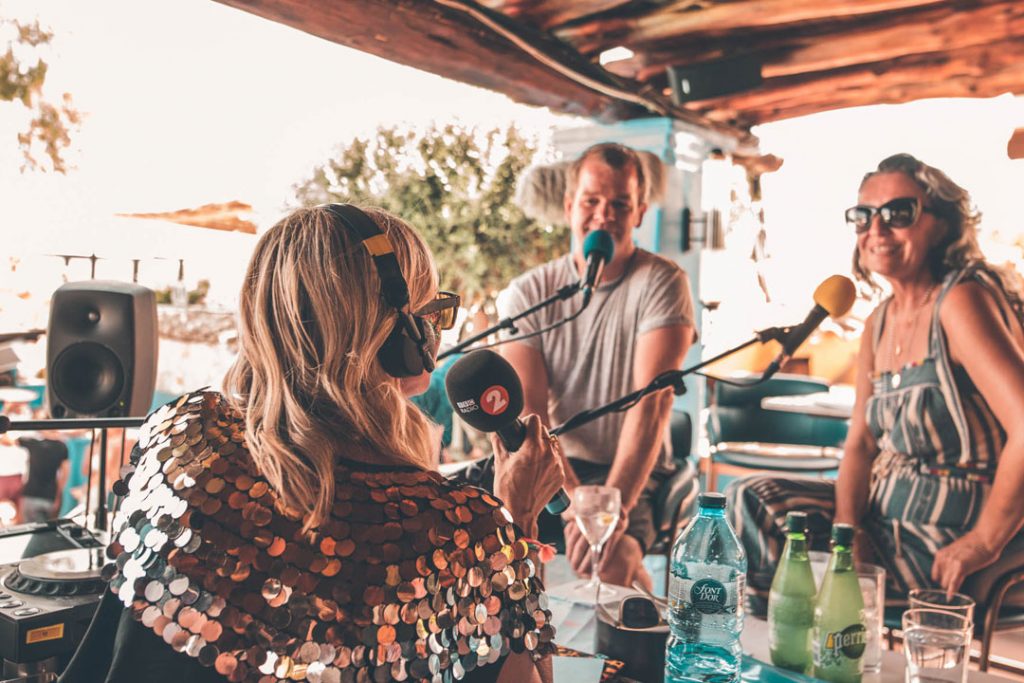 This year, for the very first time ever, BBC Radio 2 decamped to Ibiza and set up a temporary residence at Pikes to mark the 30-year anniversary since the second summer of love! Zoe Ball presented a live broadcast by our pool that was part Club Tropicana, part comedy (thanks to a certain Mr Pike and her description of Pikes as a calmer version of the Exotic Marigold Hotel) and a whole lotta great music courtesy of Faithless, Morcheeba, Groove Armada and Pete Tong. By night, Scissor Sister Ana Matronic hosted her Disco Devotion show live from Freddie’s until the early hours. Thanks to everyone for tuning in! 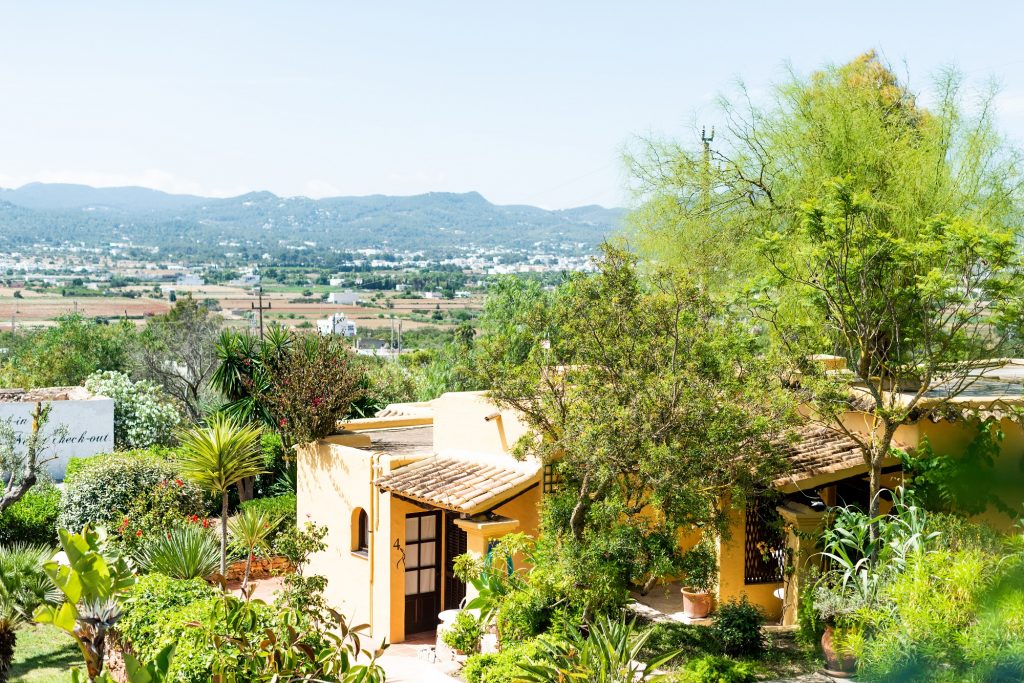 No matter how deep we delve into the online world, there’s still something so stylish and indulgent about flicking through the pages of a glossy magazine and we were thrilled to be named among the Best Hotels in the World by the prestigious Sunday Times Travel Magazine, who accurately described us as: ‘A quirky red-roofed finca slightly up the hill from the sunset strip of San Antonio, it has sprawling gardens and terraces dotted with garden gnomes, plastic crocodiles and pink tennis courts. It hosts some of the season’s wildest after-parties (including jollies in Freddie Mercury’s former suite, now a private nightclub), but afternoons are spent lazing on fat daybeds to chill out beats.’

On In London – having read the aforementioned accolade – paid us a visit and wrote a fabulous review of our all-new menu in Room 39 and saying they ‘could feel the true spirit of Ibiza running through and through’. We were thoroughly chuffed to discover the prestigious Delicious Magazine had also sung our restaurant’s praises after visiting us on one of our Ronnie Scott’s Live Jazz Dinners. ‘The food is inevitably fine dining in style, given chef Lee Milne’s Gordon Ramsay pedigree: expect good looks on plates, deftly cooked meat and clever flavour combinations.’ Continuing on the food front, Tempus tucked into our Sunday roast that sounds like it lived up to its reputation: ‘The quality was outstanding – way better than many gastro pubs I’ve been to in London – with the added bonus that our meal was soundtracked by a DJ playing low-key, atmospheric Balearic classics as we dined.’

ON IN LONDON DELICIOUS MAGAZINE TEMPUS

The Evening Standard’s ES Magazine declared Pikes THE place to party, citing: ‘If it’s good enough for Freddie Mercury…’ and recommending our all-new Curiosity Shop cocktail bar, while the girls from popular weekly mag Grazia came to us looking for ‘An old-school night out’ and dubbed our nightly events ‘epic parties in the hills’. Abode magazine called us ‘Ibiza’s ultimate hostelry of hedonism’ before going on to make us blush by saying ‘As absurdly decadent destinations go – the hotel is hard to equal’. ShortList dedicated a four-page spread to the life and times of Tony: ‘The story of a man who built his dream’. 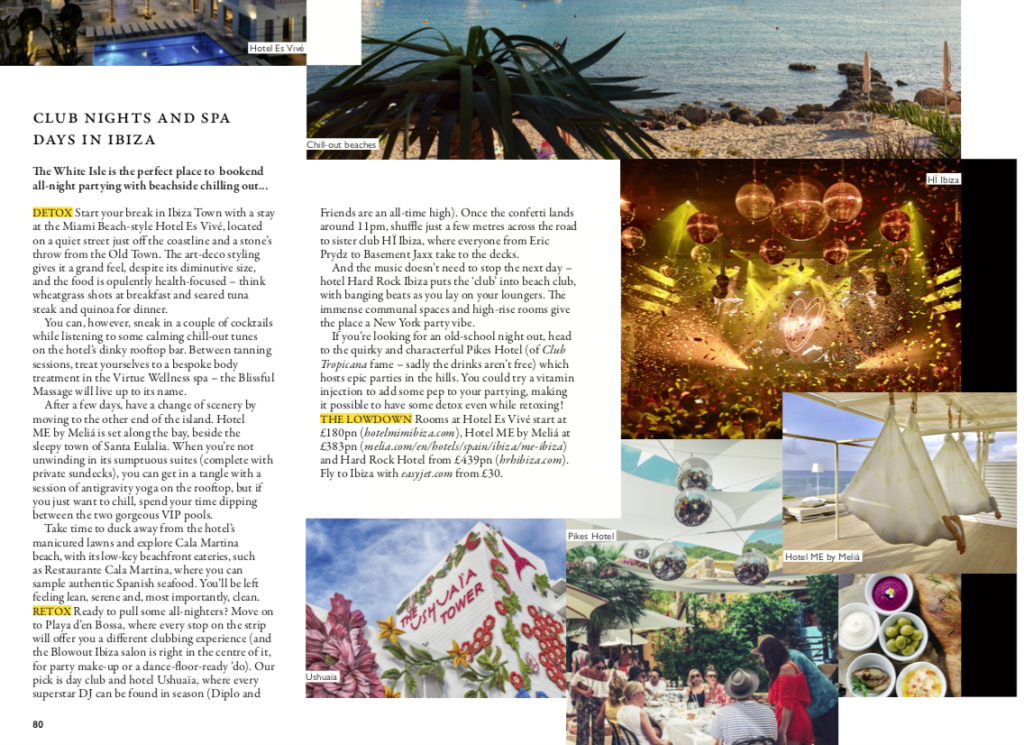 Flicking through the papers is such a time-honoured tradition that’s well worth the inky fingers when you find yourself mentioned by some of the most revered rags in the world! The Metro veered away from the party scene and called our monthly Cosmic Pineapple event ‘the real deal’ when it comes to promoting health and wellness. They also recommended our inaugural Pikes Literary Festival on their Escape Hot List. The Times too, encouraged their readers to visit the Literary Festival as an alternative to ‘flamboyant party nights’. 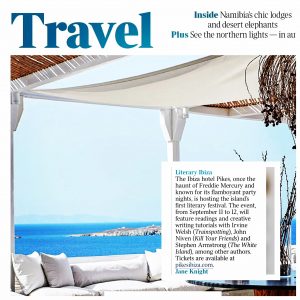 METRO ‘UNDER THE RADAR’ METRO ‘ESCAPE HOT LIST’ THE TIMES

Another journal opting away from the typical Ibiza style reports of beaches and parties was The Guardian, who published an in-depth article singing the virtues of the off-season on the white isle – journalist, Neil Forsyth, does however get ‘a reminder of the island’s hedonistic spirit’ when he pops into Pikes! Although the hotel wasn’t actually open at the time, he was given a tour by our creative director Dawn Hindle that took in all the sights and delights Pikes has to offer. 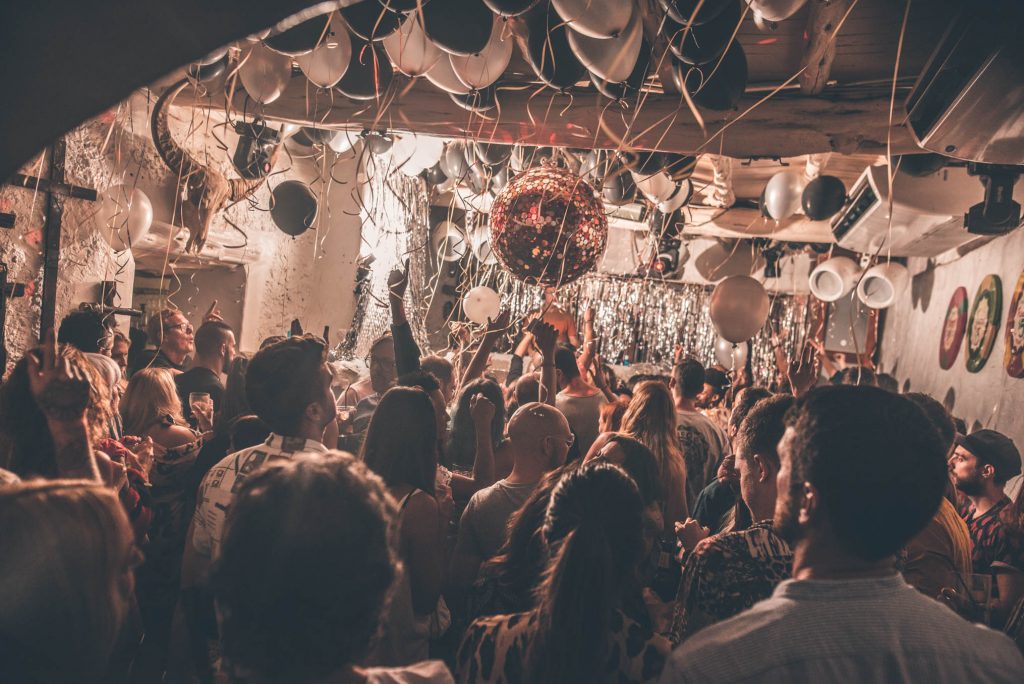 Oh dear internet; how ever did we live without you? Here are a few of our favourite online highlights – if you fancy reading even more, our good friend Google is at your service! 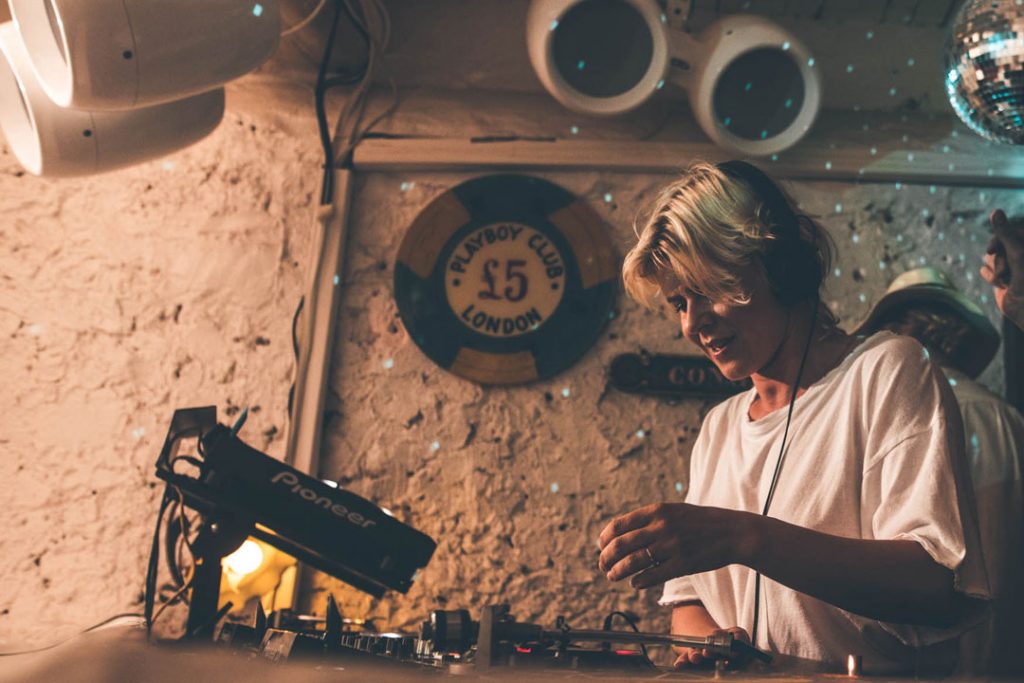 On the musical front, Dazed profiled Swedish songstress Robyn on the eve of her Robyn Goes Tutti-Frutti gig at Pikes and captured the mood of Freddie’s as she spun disco and eclectic tunes. ‘The Swedish popstar moves lithely behind the decks in the sloped, sweaty club space, Hands reach out to her from the sweaty haze, as the clubgoers chase the warm glow of acknowledgement from the pop innovator.’

Our friends at Mixmag made a great case for visiting Pikes on the tail end of the summer season, introducing us with such perfect prose we had to share it: ‘There’s one word that makes the heart of any self-respecting Balearic renegade light up with glee. A word so drenched with infamy that you can basically feel the bristles of Freddie’s moustache running down the side of your neck when you hear it uttered. A word so simple, but so frisky, that it might just be the most iconic on the island. Pikes.’ We got goosebumps from that one.

Marie Claire jetted in to Ibiza for just 48 hours and in that time were able to visit us for both a party and a recovery roast. ‘You can’t fail to have a fun time here, especially thinking about what history the place has. If only those 500 year old Ibiza finca walls could talk eh! We say it’s a little bit of old skool Ibiza, true escapism and a welcome getaway from the crowded clubs.’ The Style Traveller, Bonnie Rahkit, agreed: ‘To party with the island residents in the know, Pikes is an iconic favourite. The vibe is mischievous, dress up and you never know what’s gonna happen, boutique clubbing at its best.’ 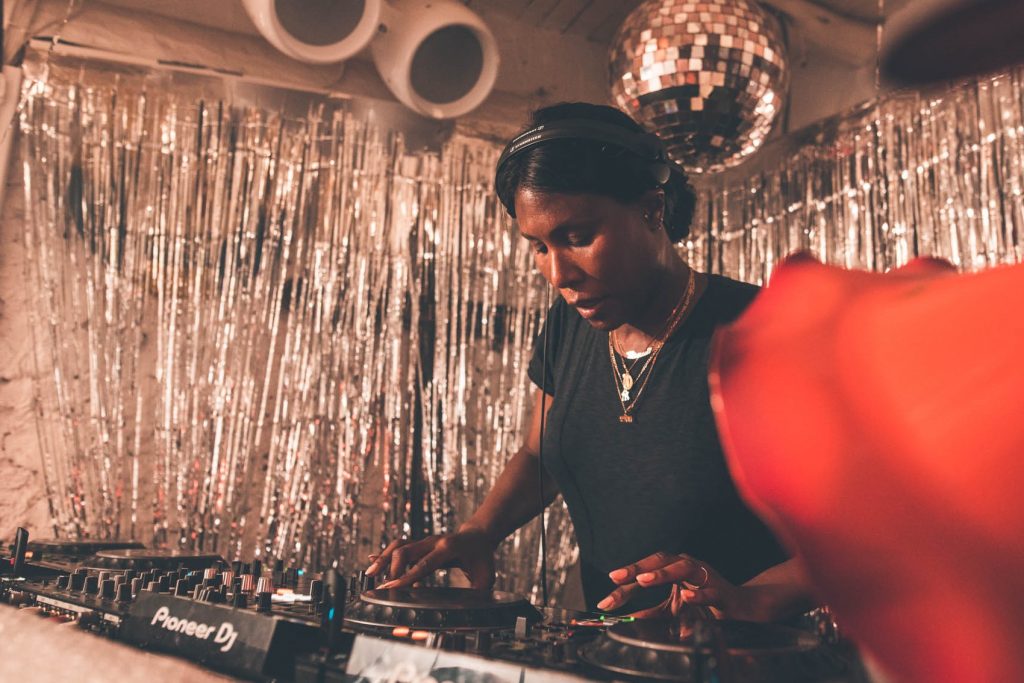 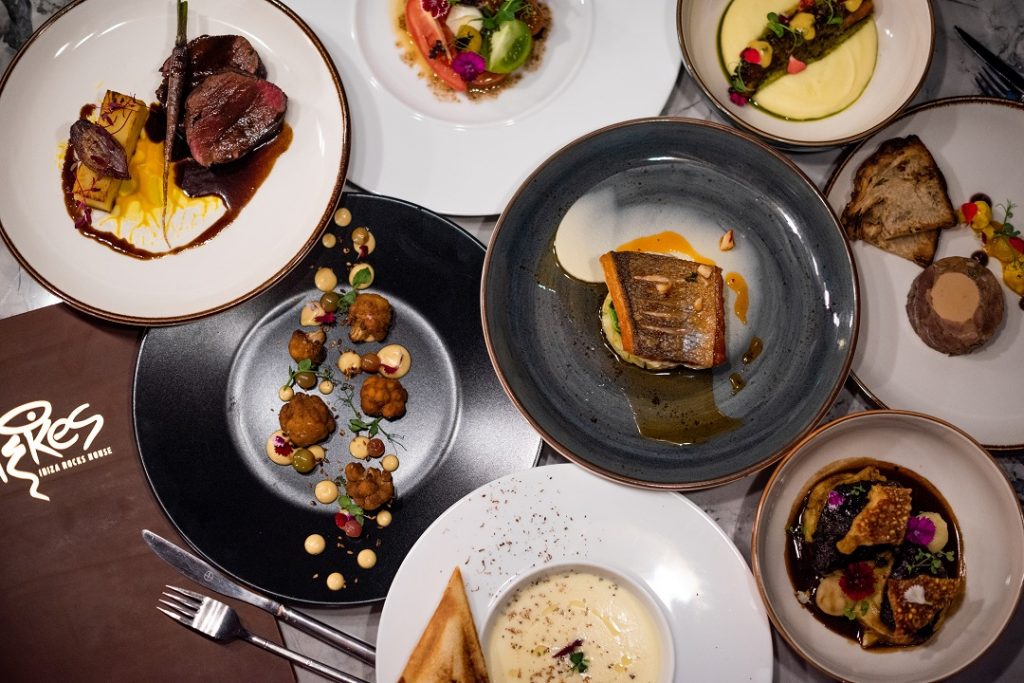 And last, but absolutely not least we were featured many times throughout the summer on White Ibiza – the island’s leading high-end guide to Ibiza – who supped cocktails in our Curiosity Shop, chowed down on our breakfast menu and indulged in a decadent dinner at Room 39. At the end of each season, the website invites its readers to vote in an online poll for their favourite Ibiza destinations and we’re so chuffed to announce that Pikes won FOUR categories: Best Boutique Hotel, Best Restaurant, Best One-Off Event for Freddie Rocks and Best Recurring Event for Melon Bomb. An amazing end to an amazing season.

Press Cuttings from: Grazia / The Times