Don’t You Know Who I Am?

Working on the door in any nightlife venue takes a certain kind of moxie. Add Ibiza to the mix and it requires an extra dose of strength, optimism and humour, not to mention a pretty thick skin. Holding her clipboard with pride and wielding her power wisely, Maya-Blue Gamble is well-known as the face of the Pikes guest list – she calls herself the resident door bitch when asked to define her role, but quite frankly, this smiling ray of sunshine is anything but bitchy. Unless she’s pushed, which we don’t recommend you do.

Music and events are in Maya’s blood – her family have been programming the Glastonbury dance arenas (now known as Silver Hayes) since before she was born – and yet surprisingly, she had no prior connection to Ibiza, nor any strong desire to visit the island, before she discovered Pikes. The born and bred Bristolian made her first visit to the island just four years ago to attend a friend’s birthday party (“It was a big ridiculous crazy party that just blew my mind!”) and it was during this time Maya discovered Pikes. “I didn’t get in the first time because I was only 18!” she laughs. “So I came back the following year when there wasn’t a party on. I met Sunny, he gave me the full karaoke and boudoir experience. After that, I had this really intense fixation with Pikes – it was somewhere I just HAD to be.” 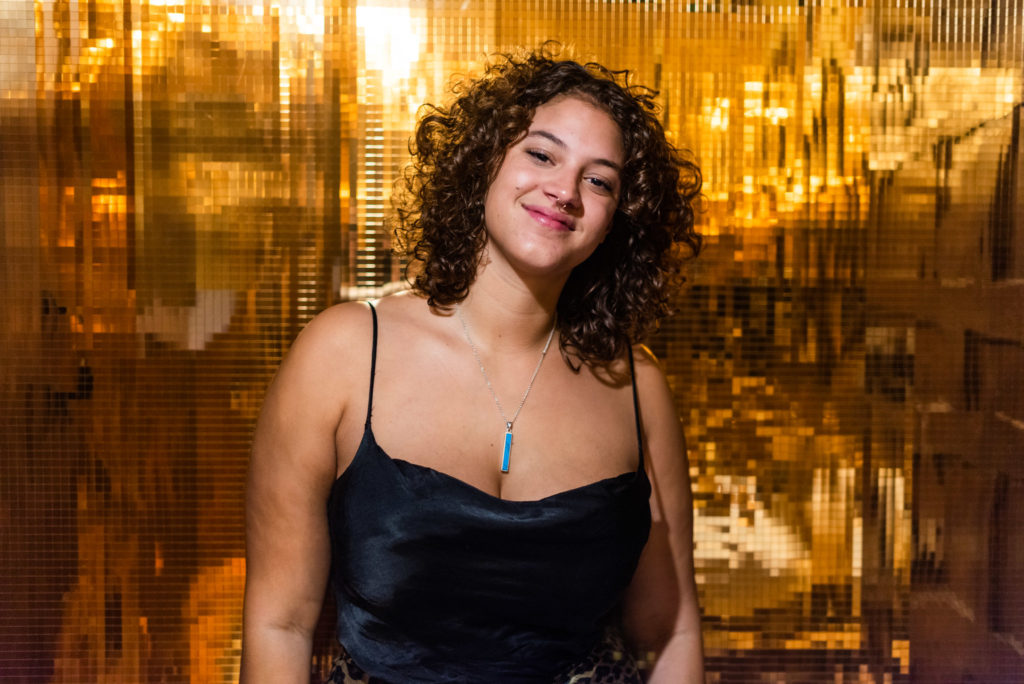 Now before we go any further into Maya’s journey – let’s just clarify something for those of you who are madly doing the math in the background: yes, our Maya is just 22 years old. She’s the baby of the Pikes family, and no, the irony of her role as the guardian of our guest list, whose job it is to ensure our ‘over 25’ policy is enforced on the door, is not lost on us, nor is it lost on Maya. “It’s hilarious,” she says. “My age is a bit of a secret at Pikes. I do feel younger but I think I’m quite good at owning my age. It’s not weird for me being around older people all the time – I enjoy it.” A natural people person, Maya’s knack for holding her own with people of all ages stems from spending much of her life surrounded by adults (“Oldies!” she laughs) in the music business, in addition to her Bristolian hippie enclave upbringing.

Right, so where were we? Young Maya, having discovered the wonderful world of Pikes, decides that she absolutely, positively has to get herself a job here. 2018 was a fallow year at Glastonbury (Maya also programmes for Silver Hayes – but we’ll get to that later), and she was looking for an opportunity to do something different. Pikes it seemed, was the answer. “I really hunted for it,” Maya recalls. “I did everything I could to find out who to speak to, or to get introduced to the right people to get me here. I needed to get out of my city and have a different experience.” Finally, the stars aligned – her godmother, who was managing a photography studio in London, knew that Pikes creative director Dawn Hindle would be coming in for a meeting, so she asked Maya to ‘intern’ for the day. 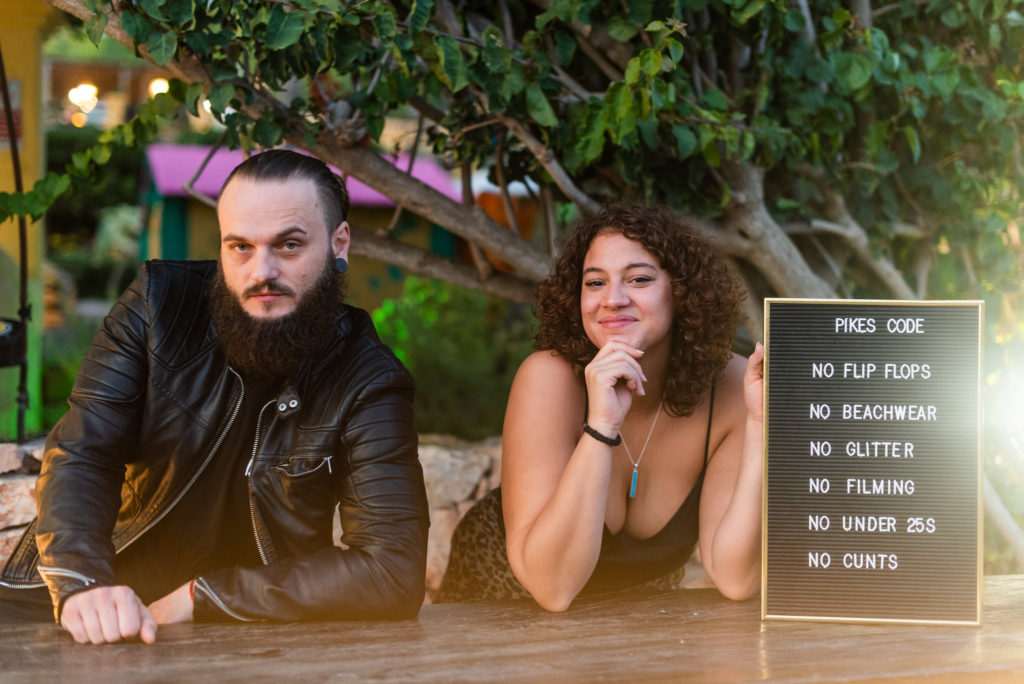 The rest, as they say, was history. She got her two minutes with Dawn and was asked to send her CV through to Pikes – which Maya cleverly delivered without disclosing her age. With many mutual music industry contacts also giving Maya glowing references, it was a no brainer. We needed someone to man the guest list; someone who wasn’t easily impressed by name dropping or by famous people; someone with a calm yet firm nature who wasn’t afraid to stand their ground. We also needed someone who could have a laugh with our guests, as they waited in the queue; someone with real banter, and a beaming smile that softens the blow of saying no. And of course, we needed someone who had the stamina to work six nights a week until close without getting tired or grumpy – with Maya, we’d found our girl.

The night begins for Maya at around 9pm, starting with a pow wow with Mika – our captain of the night – and a scoot around the venue to count the amount of guests who are already onsite. Then there’s a whole bunch of fiddly admin – transferring all the notes, emails, WhatsApps, voice notes and website RSVPs onto the master guest list spreadsheet (Maya doesn’t really hold a clipboard all night – we are in the 21st century after all) – before she heads to the front door (“My boss lady desk”), where there’s absolutely no way of predicting what kind of night lies ahead! “I’ve seen all sorts of crazy situations,” Maya says. “Grown men being reduced to tears, or throwing up on themselves, really horrible people trying to bribe me or shouting at me, but that’s the exceptions – there are also a lot of amazing people too.” 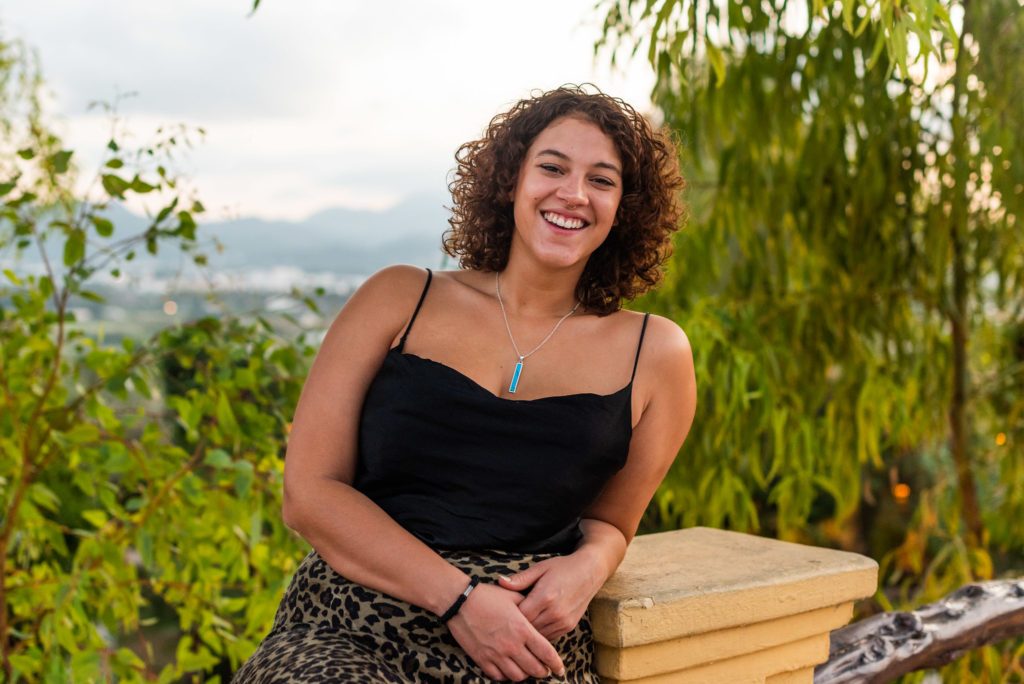 The basic rule of the guest list at Pikes is simple: if your name’s not down, you’re not coming in. In recent years, we’ve also added a few house rules to the entry criteria, namely: no flip-flops (for your own safety), no beachwear (because Pikes is not the beach), no glitter (for the environment), no filming (on Harvey’s request and also because we want you to live in the moment), no under 25s (aside from Maya, we’re a grown up venue) and last of all, no cunts. That last rule was Maya’s personal directive (“It’s my favourite word.”), added this season, in reflection of some of the tougher moments she experienced in 2018. “Working on the door can be two-sided,” she says. “The biggest challenge is the people, but I love meeting people! I like feeding off people’s energy when it’s a good night.”

“It’s pretty challenging to have to have a conversation with middle aged women who rock up in nothing but a bikini,” Maya admits when asked about some of the more difficult moments in her stint on the door. “I think everyone should own their own body, always, but this is a night venue so no bikinis. Also… yeast infections! Take your bikini off!” Maya is well aware she has the power to make or break someone’s night, and she also understands her responsibility to stick to the Pikes Code. It’s her ability to walk the fine line between the two that makes her so good at her job. “I made a man cry once,” Maya confesses. “But he’d gotten out of a taxi and pissed in our car park! I was not going to let him in – who the fuck do you think you are?” That’s our girl – you’ll get no arguments from us. 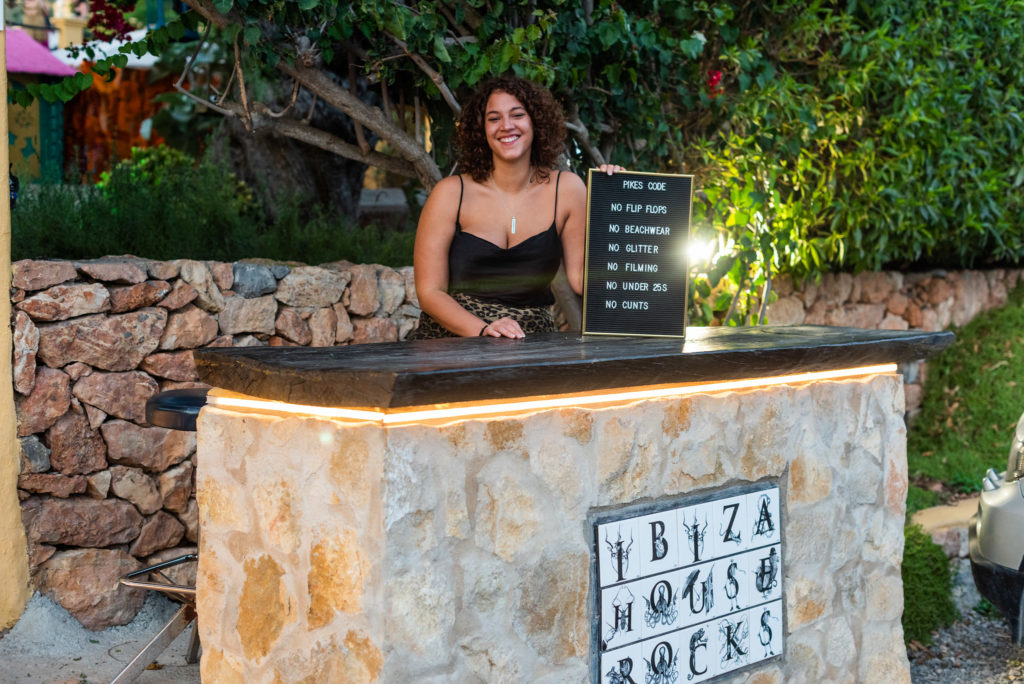 Receiving gifts (note: NOT bribes!) is one of the perks of the job, with many island locals dropping off little care packages (ranging from takeaway curries to spliffs) for Maya on their way into the party. After all, one of the toughest things about working on the door in any venue, is that although you’re in the midst of all these people, in many senses, it’s quite a solitary role. When her shift is over, Maya occasionally joins the party (Artwork, Harvey and Honey Dijon have been her faves) but admits it’s not easy to get on the same level as everyone who has been there for hours. “I love working nights, but it’s hard to throw yourself into Freddies when you’re sober!” she says.

Now the season is over, Maya is busy throwing herself back into life in the UK, where she works in clubs and festivals doing artist liaison and working on gender equality initiatives. She’ll also be stepping up within the family business alongside her sister, as her father recently announced his decision to step back. “Silver Hayes is our legacy,” she says humbly. “I have so much to learn. There’s just so much music out there!” Maya sees Pikes as the yin to her Glastonbury yang. “Glastonbury is such a special place for me,” she says. “I literally grew up in that field – the field has been around much longer than I have! But Pikes is a real escape for me. It’s a bubble. I would never have come to Ibiza without Pikes – this feels like a special point in my life.”