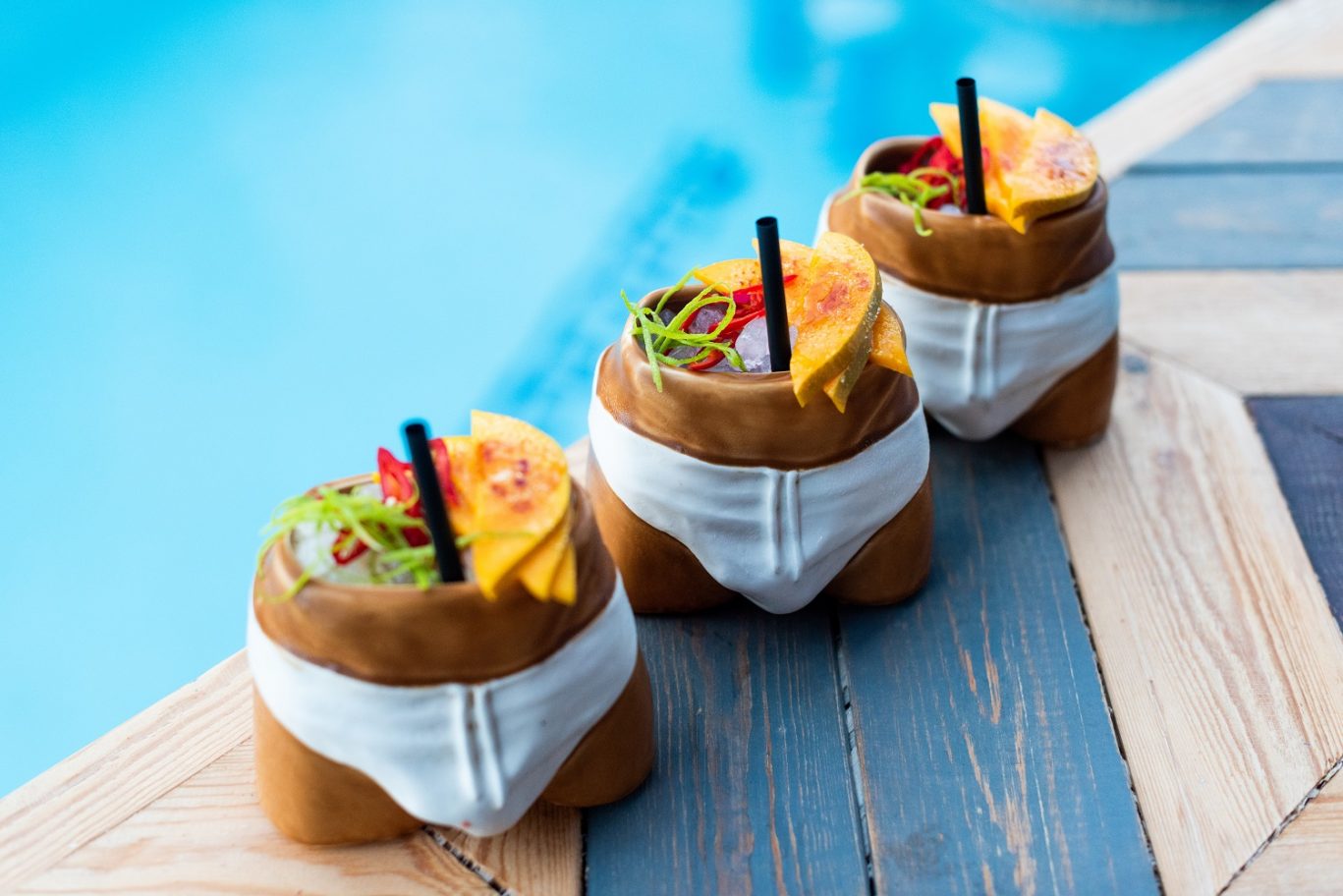 Pikes Up Your Life!

Our Favourite Picks from The Rockett St George Collection

The signature Pikes style is impossible to define (though quirky, eclectic and eccentric are bandied around quite frequently). There’s no specific genre repeated throughout the grounds and rooms and indeed, there’s never even been a formal plan when it comes to designing and decorating our spaces. Creative director Dawn Hindle operates on a buy now, find a home for it later type ethos when it comes to interiors and furnishings – an approach that makes sense, when you think that most of the pieces found in Pikes are one of a kind, vintage or antique. If we didn’t snap them up straight away, someone else would!

Over the years, we’ve learned that many of our guests go home inspired after staying with us, often recreating little Pikes-inspired corners within their own homes. We also started noticing that anything that wasn’t nailed down seemed to go missing – which in one way was flattering (after all, people really loved our style) and in another, frustrating (we love our décor too). With this in mind, we launched a collaboration with the interiors queens at Rockett St George last year, creating a Pikes themed home line available to anyone and everyone which has gone on to decorate many a Pikes lover’s home. And so today, without any further ado, we’d like to unveil our second collection… 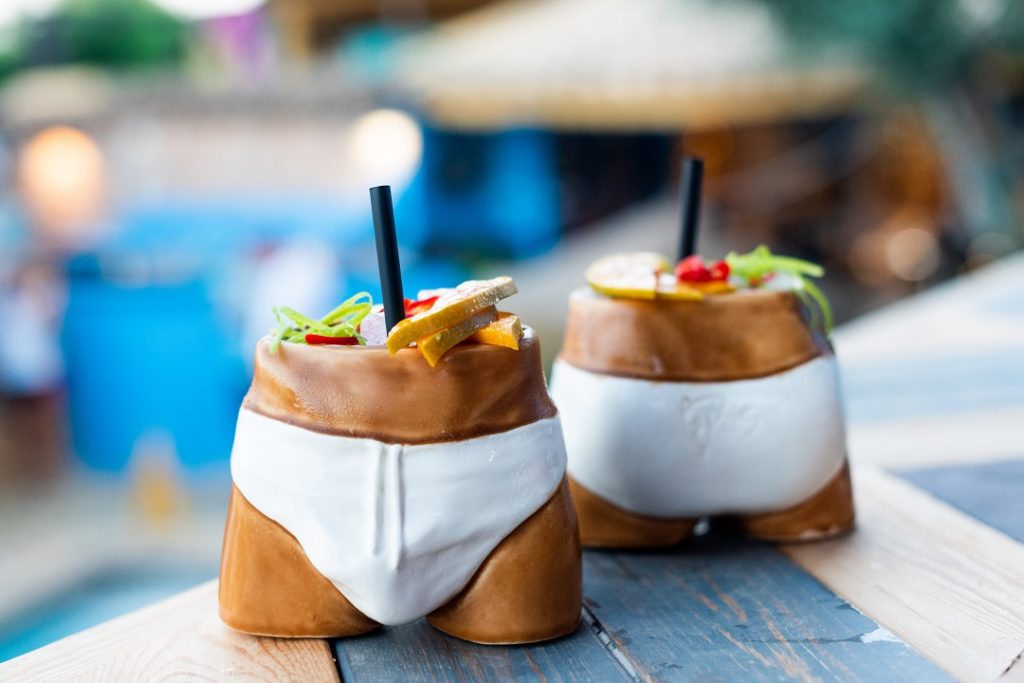 The pièce de résistance within this year’s Pikes x Rockett St George collection has got to be the Club Tropicana Wham Shorts Cocktail Sharer – though you could get creative and use it as a planter, a pen holder or vase. The ultra-tanned, ceramic lower torso is inspired by George Michael’s tighty whitey style swim trunks in the famous film clip, shot here at Pikes back in 1988 – whether it is anatomically correct, well, we’ll never know. Needless to say, there’s something to hold onto as you’re sipping your drink! Ask at the bar for George’s Cock… Tail and you’ll be served up a strong and creamy concoction with just the right amount of spice in George’s pants… and you can take the mug home with you once you’re done!

*currently out of stock but you can sign up to know when they’re back or pick one up from Pikes! 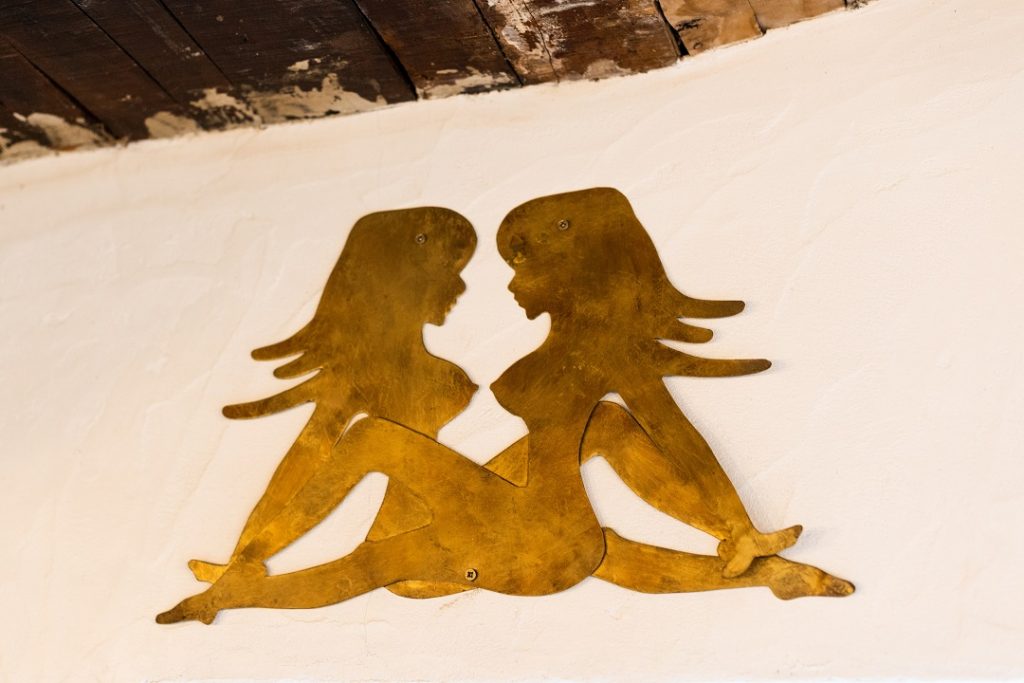 These two sultry bronzed ‘metal trucker girls’ have been a fixture at Pikes since Creative Director Dawn Hindle found the pair in a Venice Beach antique shop in 2010. Most notably, they’re seen on inside of the big wooden gates that open into our restaurant terrace, Plaza Mayor and this season, you’ll also spy the mudflap girls presiding over the Curiosity Shop at Room 39 from a lofty height. Inspired by the classic hourglass silhouette (which harks back to a famous Californian design of the 1970s) seen on many truckers’ caps, stickers and of course, mudflaps, the lovely ladies are available to buy singly or as is customary, as a pair… or indeed, as many as take your fancy! 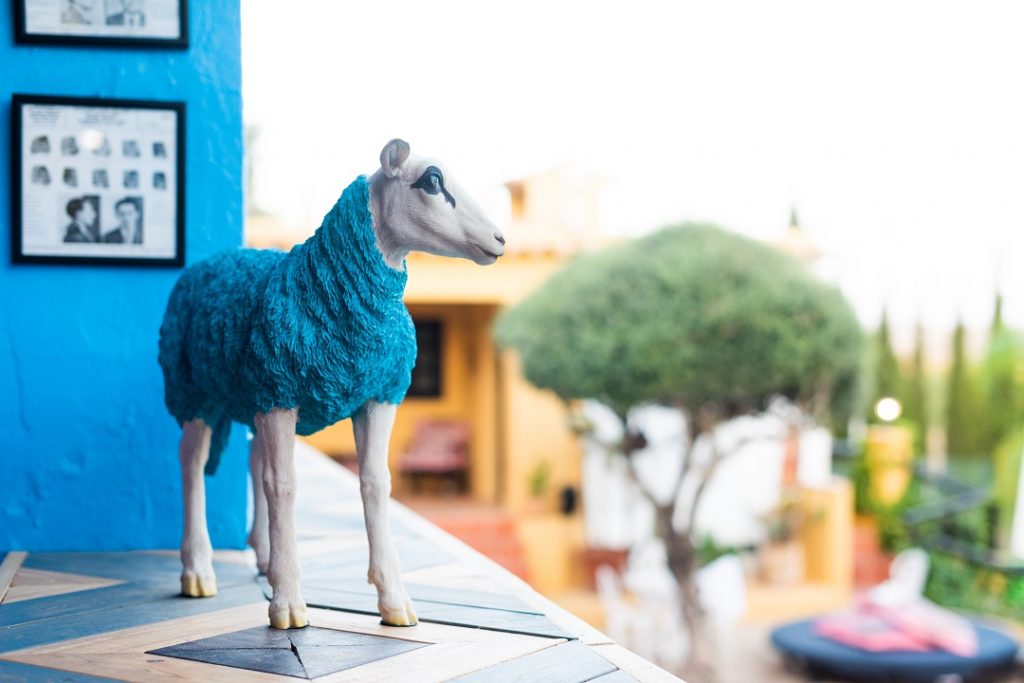 We once had an entire flock of party sheep grazing in our garden and they proved to be quite popular with our guests. So popular in fact, most of them ‘found’ homes outside of Pikes. Now, either they grew legs and walked out of the hotel themselves or there were some very thrifty, light-fingered guests who must have worn extraordinarily large shirts to hide them under when they decided to adopt them! We’ll never know. Anyway, we digress… so popular were our flock of sheep we decided to recreate them with Rockett St George and make them available to everyone! Choose between poolside relaxation blue or tennis court fluoro green – or choose both. The more, the merrier.

*currently out of stock but you can sign up to know when they’re back! 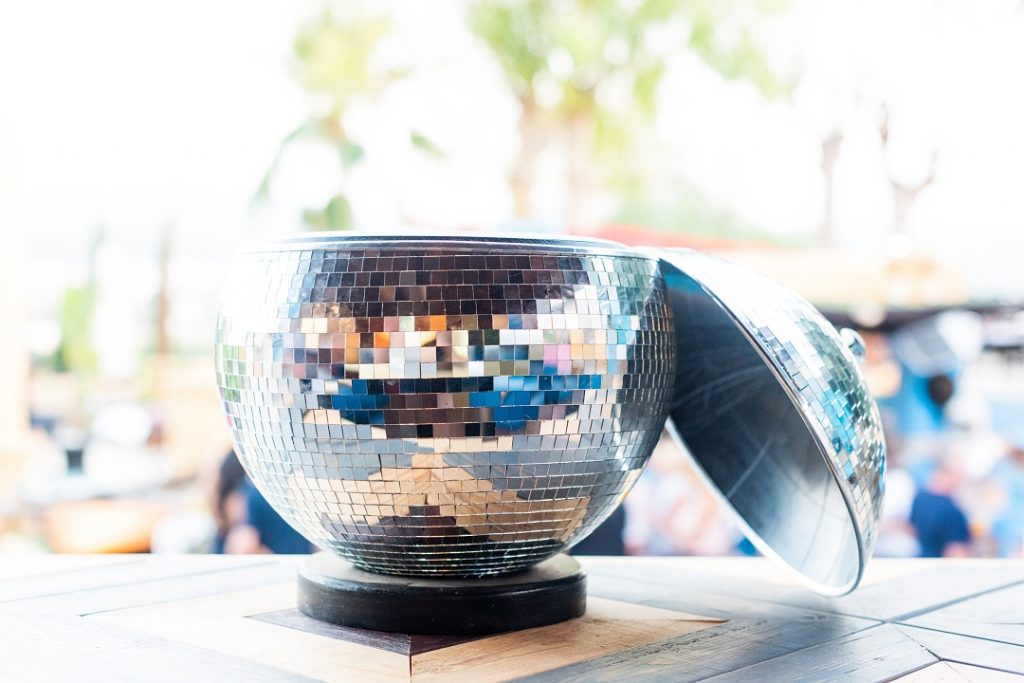 When is a disco ball not a disco ball? When it’s a giant cocktail sharer that’s guaranteed to get your party started fast. Taking inspiration from the enormous disco ball hanging from Freddie’s, not to mention the collection of regular sized ones (does anyone know the collective noun for a group of disco balls?) casting their magical sparkle over Plaza Mayor, this life-sized disco ball is actually a vessel for your favourite drinks – big enough to hold eight servings all at once. Of course, we’re not promoting binge drinking! Rather, it’s the perfect excuse to have a party and it looks pretty special even when its not in use. You can also order up cocktails in this sharer at the Curiosity Shop in Room 39 throughout summer… why not try before you buy? 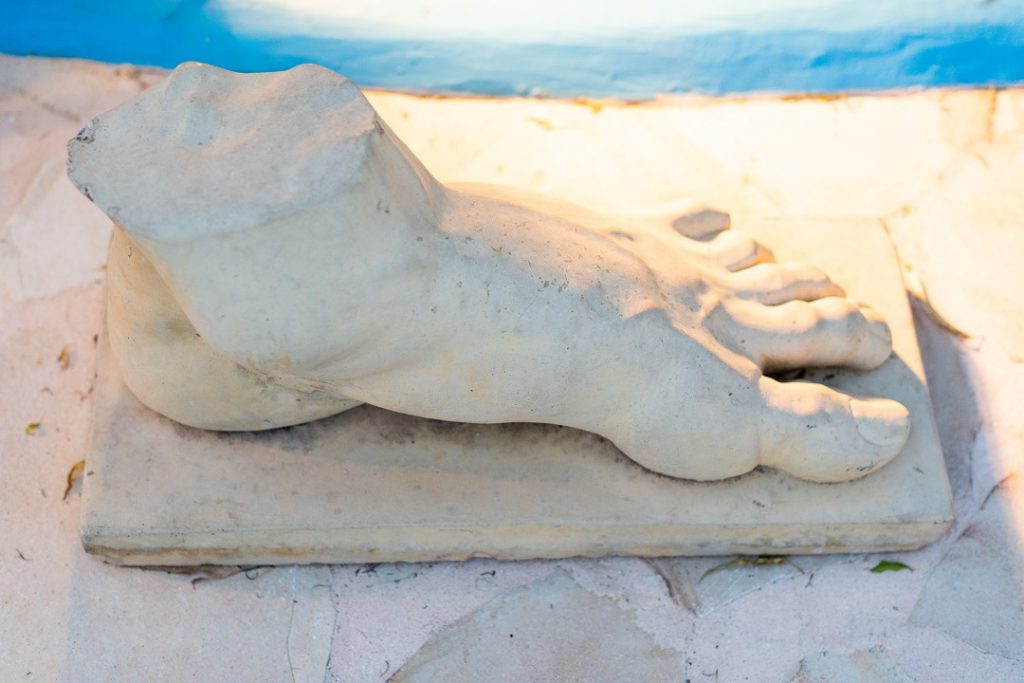 One of our all-time favourite pieces in the hotel is our giant Neoclassical style single left foot. Originally found at our favourite rummaging site, Kempton market, we move the random foot – which looks as though he once came from a rather large sculpture – around each year so you never quite know where you’ll spot it. Tip: This season, he’s on the upper sun terrace behind our poolside DJ booth and if you’ve taken a liking to him, now you can order your very own plaster version from Rockett St George. Just like its source of inspiration, the King of the Disco Neoclassical Style Foot works anywhere and everywhere: as a doorstop, on a shelf, poking out from under a curtain or even from under a bed. 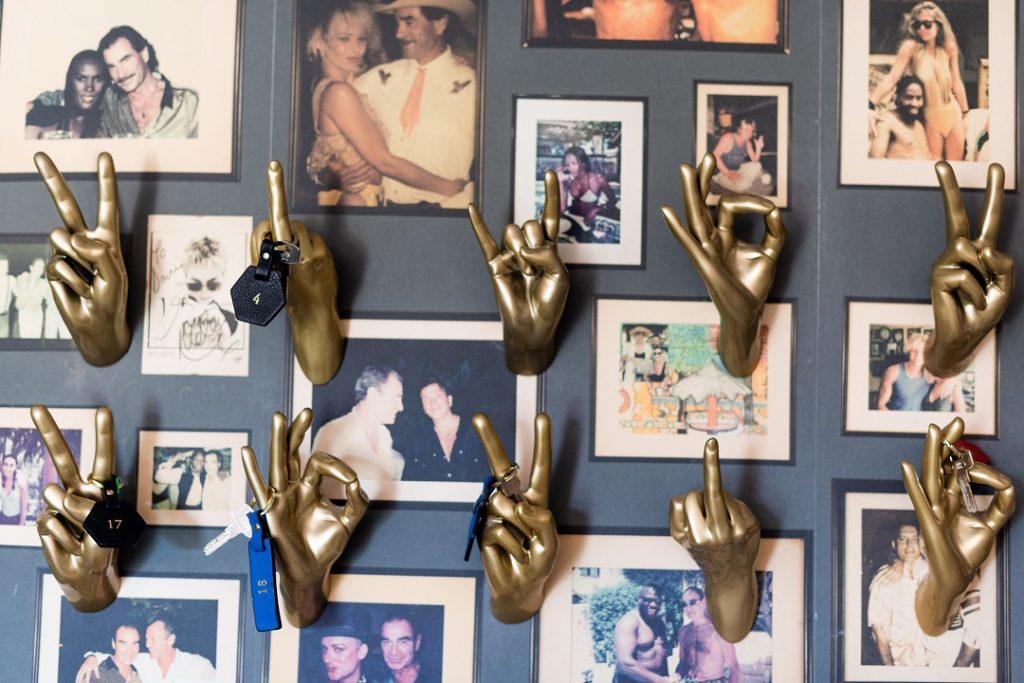 Remember the old saying: “I’ve only got two hands!”? It was the kind of thing your mum would say when you’d ask her to hold your schoolbag in the middle of the grocery shopping or while cooking. Now, with our new Gold Hand Wall Art and Coat Hooks, you can have as many hands as you like to help hold bags, coats, jackets, scarves or even keys. There are four gold hand gestures to choose from: Okay, Up Yours, Peace and Rock. Each makes a striking statement, whether used for fun or functionality. Add them to a gallery wall or use them in place of coat hooks – we have ours lined up behind our reception desk, where we use them to hang our room keys when they’re not reserved. 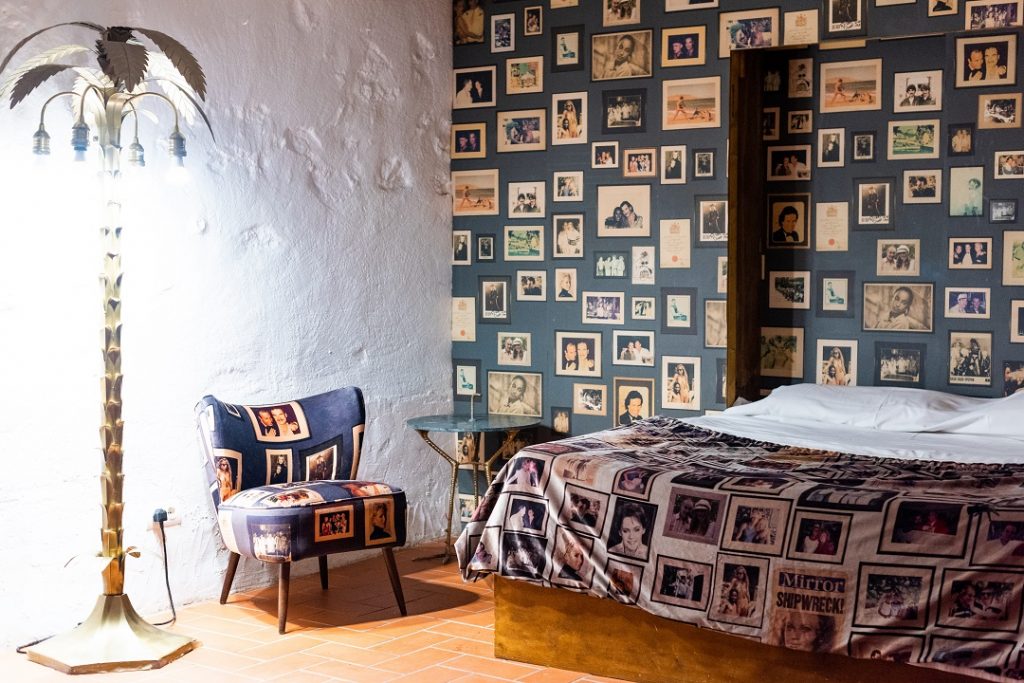 For all the true Pikes lovers out there, the Limited Edition Pikes Wallpaper has further immortalised the iconic picture wall in our lobby. Designed by Rockett St George to showcase the life and times of Tony Pike, all the photos included on the print are true replicas of the originals and includes Julio Iglesias, Grace Jones, George Michael, Boy George, Sigue Sigue Sputnik, Kylie Minogue and many others – all of whom have been guests of Tony at the hotel over the years. We’ve used it to plaster the wall of Freddie’s Suite but we’re always fascinated to know where other people are inspired to create a little corner of Pikes within their homes. Don’t be shy – send us your pictures!

Like something you’ve seen? The full Pikes x Rockett St George collection is available to browse on the RSG website.