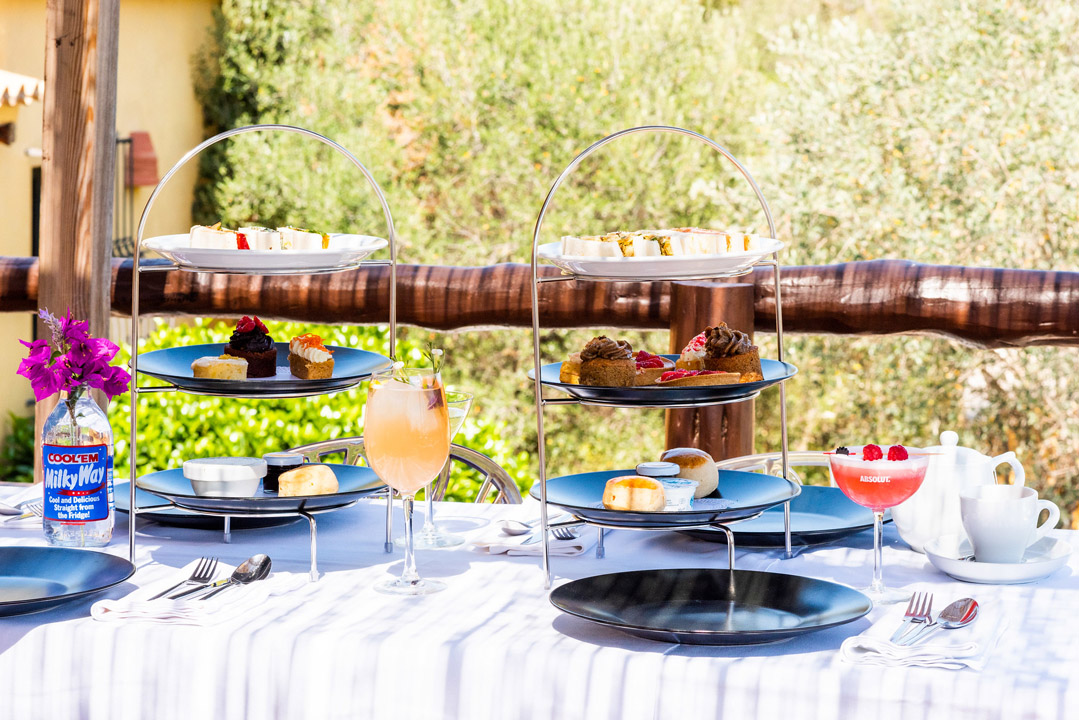 Pinkies at the ready

Afternoon tea on our terrace

Afternoon tea is something one often associates with historic international hotels: The Ritz and Claridge’s in London, The Plaza and St Regis in NYC, Raffles in Singapore, The Four Seasons Hotel George V in Paris, The Langham in Sydney, and so on, and so forth. In 2019, you can add Pikes to the list of historic hotels serving up world-class afternoon teas – while we may not be as swish like the aforementioned five-star destinations, we’re certainly brimming with heritage and now, thanks to our pastry chef Will Miles, we also boast the best afternoon tea this side of Great Britain.

‘What? Traditional afternoon tea in Ibiza? It’s far too hot!’ we hear you thinking – now, before making any judgement, simply cast your minds back to when we launched our Sunday roast many moons ago. The reaction from our guests, friends and followers was quite similar at the time but look at us now – each and every Sunday in the restaurant is completely booked out. In fact, the demand for a classic Sunday dinner with all the trimmings was so high we had to extend our restaurant terrace to the roof to accommodate even more tables. And if that’s not enough to convince you – read on (hint: there’s alcohol involved). 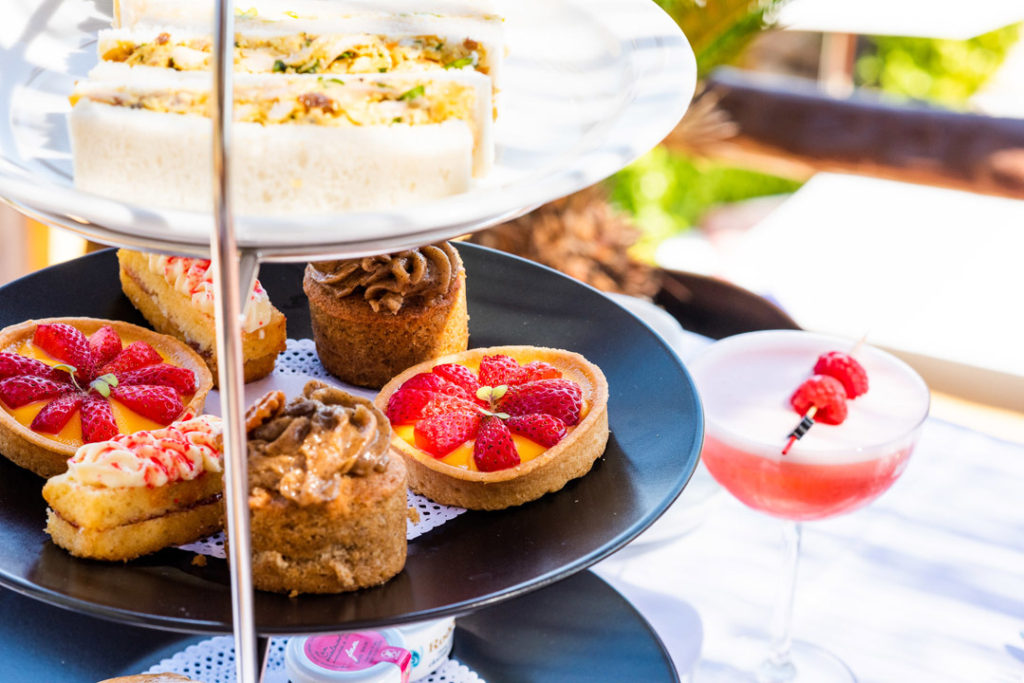 We’ve always had a fondness for nostalgia at Pikes – not only in our rooms and on our grounds, but also across the menus in our restaurant, Room 39. Head chef Lee Milne has always drawn on his British heritage, plus the dishes and ingredients he remembers fondly from childhood when creating our menus each year and it was late last season when Will found himself looking to traditions while planning for the year ahead. “I’d been thinking it would be really beautiful to sit up there on the upper terrace and have an afternoon tea,” he recalls. “Lee agreed, and then at the end of the season, Dawn [Hindle, creative director] came to us and said ‘We should do afternoon tea’ out of the blue.” Plans went into motion, classic silver tea trays were ordered and a new Pikes tradition was born.

Every Wednesday afternoon throughout the season, our breezy (and importantly, shaded) upper terrace is transformed into a very civilised alfresco tea room, complete with posh white tablecloths and elegant china teapots. The quintessential British style afternoon tea you know and love is served from 3.30pm until 5.30pm – those hours when it’s too hot to be in the sun but you don’t want to be indoors because, well, it’s Ibiza! Since dinner is served so late here in Spain (we usually sit down at around 10pm), you also need to fill the gap between lunch and dinner – historically, this is the reason afternoon tea was invented, thank you very much Anna, the 7th Duchess of Bedford – so it makes perfect sense to treat yourself to some light bites that will tide you over. 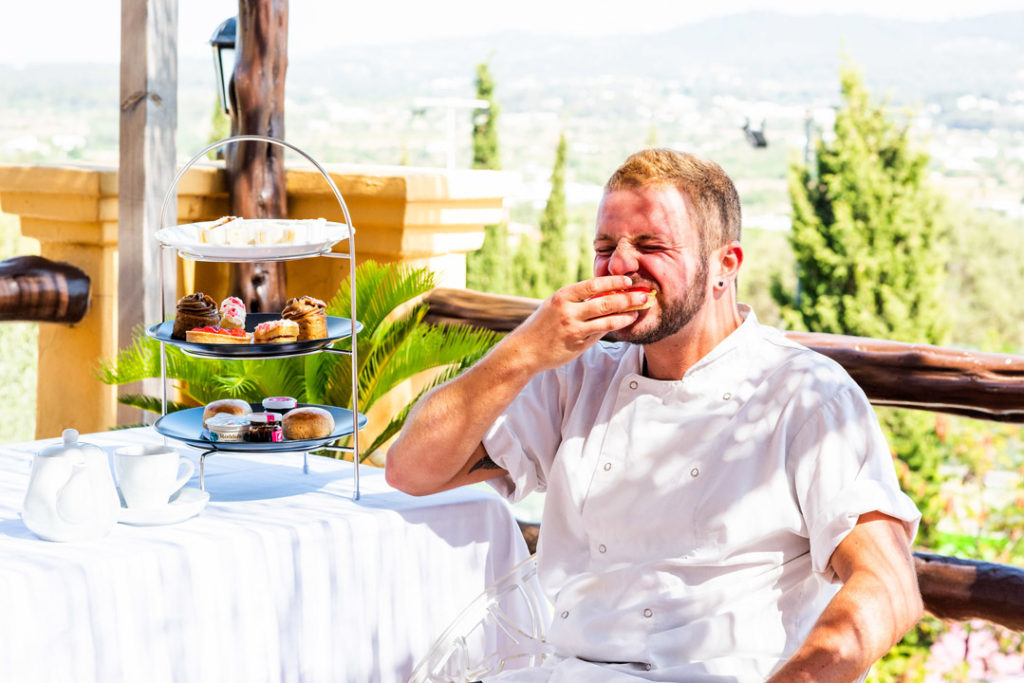 This is where our dear sweet pastry chef’s expertise comes into play. Will spent the winter months researching, testing and most importantly tasting afternoon tea recipes that would stand up in the Queen’s court. He’s created vegan and vegetarian options for each level of the tea tray, and for this reason, prior reservations are required in order for Will to ensure no one leaves the table without being completely satisfied – and trust us, once you’ve sampled his creations, you’ll want to return week after week. Starting from the top of our trays (as proper tea etiquette insists we must) we serve a selection of delightful finger sandwiches – smoked salmon, dill and orange cream cheese, coronation chicken, free-range egg and cress, or switch the non-veg options for mature cheddar and pickle, mushroom tarragon and lettuce for vegetarians, while vegans have the option of red pepper hummus and cucumber and roasted vegetable and miso.

This is followed by followed by a selection of mouth-watering homemade cakes and tarts – depending on Will’s mood that week, it could be coffee and walnut, classic Victoria sponge, delectable lemon drizzle or a surprise – and finally, freshly baked scones with Rodda’s clotted cream (the best in the biz) and local jams, once again with vegan options available, including clotted coconut cream. When it comes to eating scones, it seems the team at Pikes are divided on etiquette – should we cut them in half or break them in half? Does the jam go on one side and the cream on the other, and get eaten whole or do they get layered on together and eaten in halves? And if that’s the case – what comes first, the jam or the cream? And that’s before we’ve even discussed the north/south divide on whether you pronounce it scoh-ne or sconne. 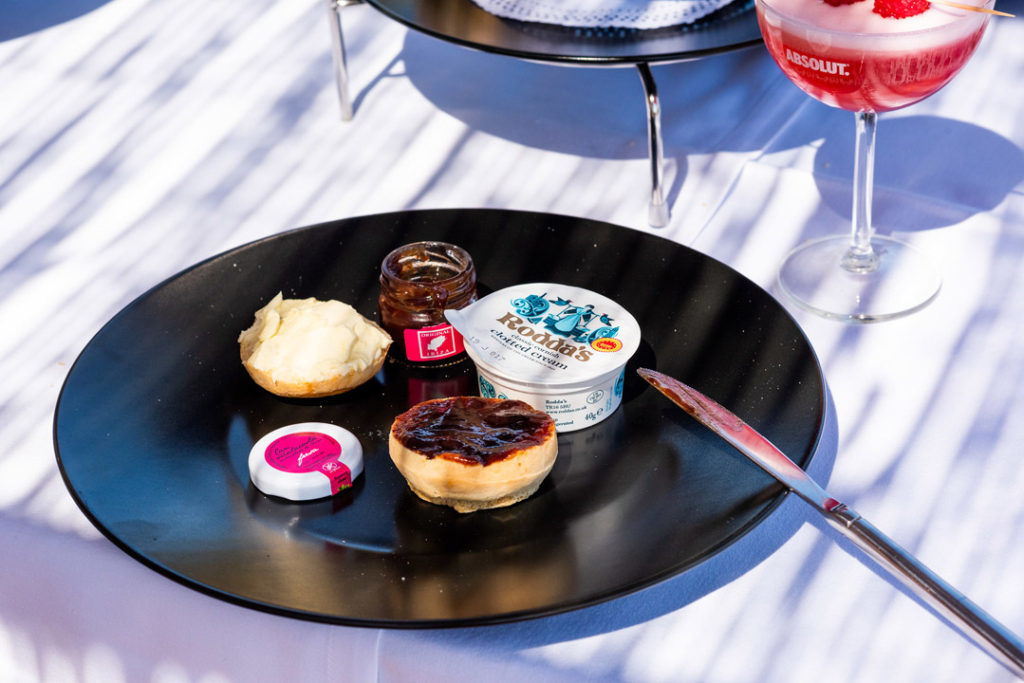 Will called on the woman who has influenced much of his culinary life to make the official call – his mother, a former food writer and passionate foodie. “My mum says you slice the scone in half, put the jam on first, and a dab of cream on top,” he affirms – and if it’s good enough for Will’s mum, it’s good enough for us. Last, but absolutely not least, you’ll need to decide what to wash it all down with – traditionalists will love our international tea menu (science says drinking a hot beverage helps your body acclimatise to the heat, so don’t let the summer heat put you off), and those in need of a pep-up may prefer a coffee. Traditional etiquette dictates you put milk in your cup before pouring, then stir it back and forth rather than in a circular motion. Hold your cup with your thumb and index finger meeting in the handle and the handle resting on your middle finger – fingers should not be hooked through, pinkies should never, ever be extended (gasp!) and saucers must never be lifted from the table.

If you’re feeling posh, you can upgrade to include a glass of Cava or a bespoke Pikes Tea Cocktail, devised by our talented trio of mixologists – also known as ‘the three Steves’ – and each inspired by a tea blend You are in the original Club Tropicana after all. The Big Shave is a surprising sweet and sour mix of Absolut Elyx vodka, raspberry, lime cordial, rhubarb bitters and that most typical of British elixirs, elderflower syrup, while The Grass is Greener fuses refreshing BULLDOG Gin, fresh basil, black pepper, St Germain, sauternes, limoncello lime and vanilla syrup. As for the Pikes G & Tea? The clue is in the name, a mix of BULLDOG Gin, lime juice, jasmine syrup, kombucha tea and peychaud bitters. Each is easy to drink (oops! See what we did there?), light and ultra refreshing – perfect for a hot summer afternoon overlooking our pool. 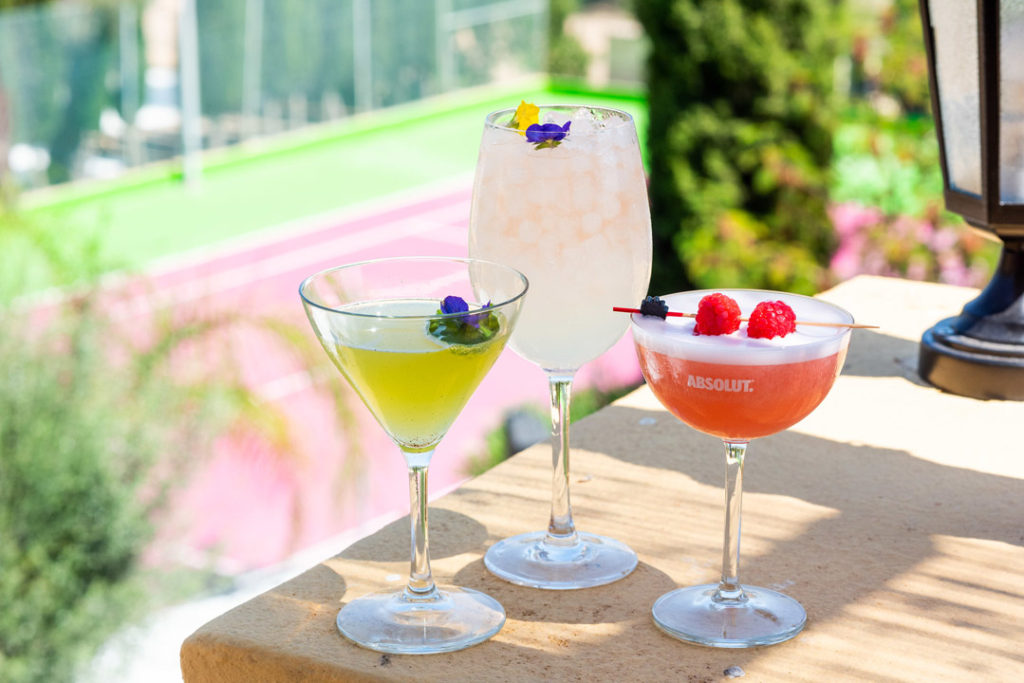 “It’s a little unusual for Ibiza,” concludes Will of our latest culinary venture. “But I think our guests will really like it – we all have that British thing in common. Even our restaurant manager Silvia, who is Italian, has worked in London, in quite a few places that serve amazing afternoon teas. We all think Pikes is the perfect place for it and that it’s going to become really popular.” With that in mind, make your reservations now – pinkies at the ready (don’t worry, we won’t judge you)!

The iconic and multi-award-winning BULLDOG Gin uses 100% British wheat to create a smooth, eminently mixable gin with multiple layers of flavour. Its 12 botanicals include White Poppy from Turkey, along with Dragon Eye and Lotus Leaf from China; adding a layer of distinction to its refreshing citrus notes.

Here at Pikes it’s our Gin of choice so when ordering at our bars, you’ll be sipping on BULLDOG Gin as standard.