Tony’s fondness for these singers was no secret

It’s no secret Pikes became a household name in the late 80s and early 90s thanks to its popularity with pop stars, actors, models, musicians, superstar DJs and record label executives at the time. And of course, its larger than life owner’s close relationships and infamous adventures with so many of his famous guests helped the hotel gain even more notoriety – in some cases good, and in others bad, but as they say, all press is good press as long as they spell your name right!

Tony was always very careful (as we are today) to treat his non-famous guests with the same respect he reserved for his A-list pals, but there’s no denying being seen on the arm of Grace Jones at Ku, hosting parties for Freddie Mercury, boating with Julio Iglesias and using the pool as the location for a Wham video put Pikes on the map – you can read more about those relationships in our previous blog, The Famous Faces of Pikes, or in Tony’s memoir, Mr Pikes. After Tony passed away in February 2019, we can sadly no longer delight in listening to him re-tell the tales of his glory days as the Pikes host with the most, but we’re thankful that some of them were put on paper so we can remember them forever. 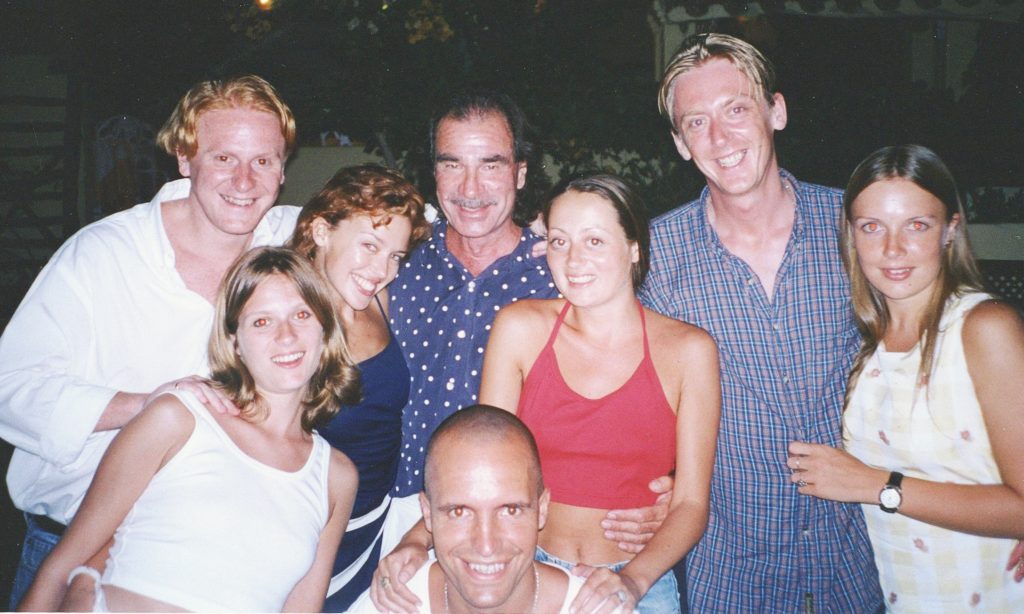 Australia’s sweetheart, the curly-haired girl who’d shot to fame as Charlene the mechanic in Neighbours, was affectionately nicknamed ‘The Singing Budgie’ by her fellow countrymen after releasing her debut single, a cover of The Locomotion, and its catchy high-pitched follow-up, I Should Be So Lucky, which propelled her to UK stardom. Kylie went through many a transformation over the following years, so it was no surprise that during one of her more edgy recording phases – when signed to Deconstruction – in 1995 that Tony Pike found himself so lucky to be hosting her at Pikes when she was booked by Cream to perform at the recently relaunched Privilege (formerly Ku).

The tiny pop princess was a redhead at the time, and Tony was eager to make her acquaintance. ‘I couldn’t wait to meet Kylie and show her what this Australian had been up to,’ he wrote in Mr Pikes. The unlikely pair struck up a warm friendship – completely platonic, though a little flirty – and while Tony was enamoured of her ‘tiny, great little body’ and ‘big heart’, there was something about her that made him act like the perfect gentleman. ‘I didn’t go there,’ he recalled. ‘I was an old man, with a serious condition. It just didn’t feel right. And I didn’t feel like that very often.’

Nevertheless, when it was Kylie’s time to check out of Pikes, Tony convinced her to stay for five more days and the two spent the entire time on his boat. The two were reunited at an event at Ibiza Rocks many years later, when Kylie thanked him again for respecting her. Fast forward a few more years, and they were spotted together at Carl Cox’s annual birthday party at the now defunct Sands Ibiza, chatting like old pals. “I’d class Kylie as a real megastar,’ wrote the man who certainly knew a thing or two about stars. ‘How could you do anything but respect her? The perfect little lady.’ 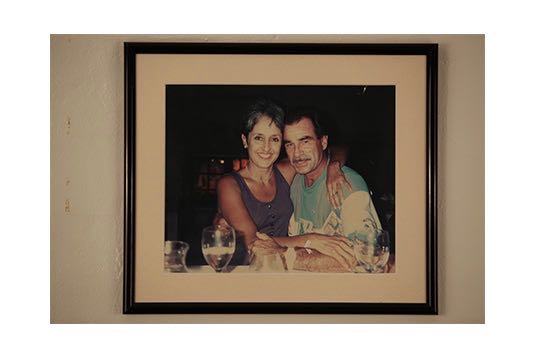 Of course, Kylie wasn’t the first (or the last) songstress to capture Tony’s attention and heart. American folk singer, songwriter, famously anti-establishment, anti-war and human rights activist Joan Baez found herself at Pikes one balmy summer night in the late 80s, when Tony hosted a dinner party in Plaza Mayor in her honour. ‘Joan Baez was a stunning woman. So sexy,’ he wrote in Mr Pikes. Halfway through the dinner, Joan got up and offered to song Tony an acapella love song… and our Romeo certainly wasn’t going to say no. (Order a copy of Mr Pikes to read Tony’s NSFW self-described erotic reaction to the experience.)

Now, Joan Baez was a woman who knew how to handle herself around strong, influential and charming men – she’d had relationships with none other than Bob Dylan and Kris Kristofferson, she’d hung out with Martin Luther King, travelled with (and knocked back the advances of) John Lennon, dated Steve Jobs in his early 20s and even lived next door to Hunter S. Thompson. So Mr Pike was certainly in esteemed company, to say the least, when he spent the rest of the night dancing until dawn by the pool with Baez and her friends. The following day, enchanted by the singer, he took her out on his boat (that trick seemed to have been a winner for him!) to Formentera – an experience which he described as magical.

Baez left Tony a souvenir of that trip – which has sadly since been stolen from Pikes – a drawing of the two on the boat, with Joan steering the boat and Tony behind her in a, let’s say, compromising position. We’ll offer a reward for its safe return! 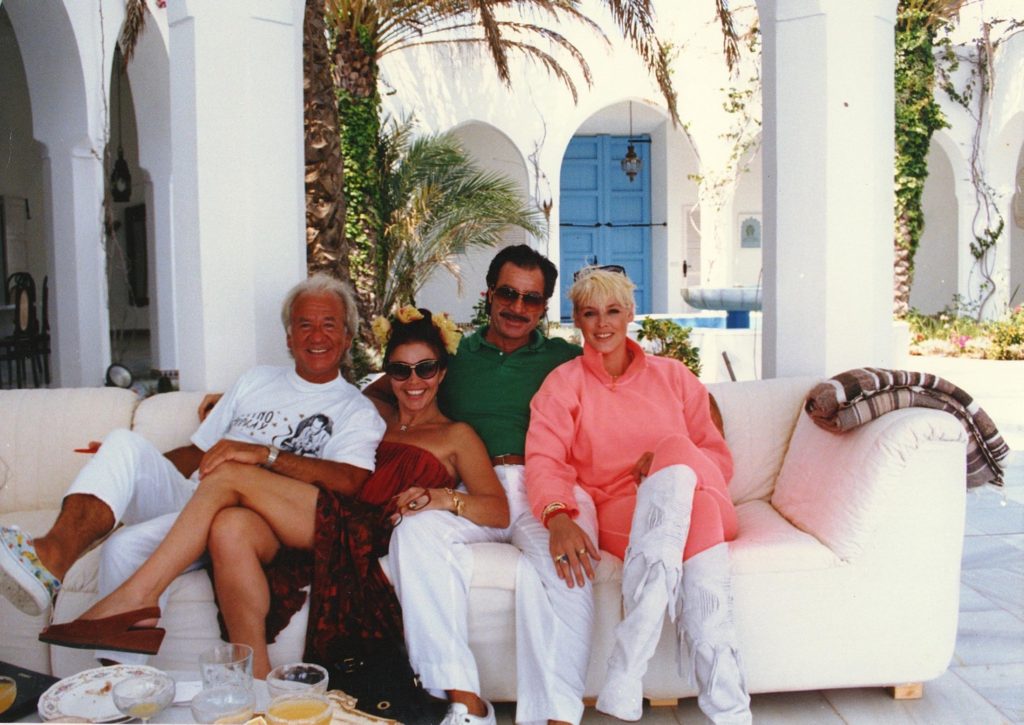 She may not be best known for her singing (although she did indeed record music and once performed at KU during her time in Ibiza), but the statuesque Danish model, actress and TV personality Brigitte Nielsen was certainly known as one of the most striking women of the 80s (and beyond). Stallone’s former wife visited Pikes frequently at the peak of her fame, Ibiza being a favoured holiday destination of the high profile star. Tony admits it was the proportions of Nielson’s chest that first drew him to her, but the two clicked immediately, with Nielsen equally as attracted to the proportions of Tony’s manhood (according to Mr Pikes, anyway!).

After showing her to her suite (Room 24 in case you were wondering), she told Tony she was going to have a quick shower – moments later, she was calling him in to wash her back. While we won’t go into details of the encounter here – you’ll have to snap up a copy of Tony’s book, Mr Pikes, for all the details – we can say Tony’s memories of her remained vivid until the end. ‘She was a phenomenal, phenomenal woman,’ he wrote. ‘Being with Brigitte was just amazing.’

She was also known to mingle with the hotel’s other famous guests, including Julio Iglesias and has continued to holiday in Ibiza for many years. Whether Brigitte – who incredibly gave birth to her fifth child in 2018 at the age of 54 years old – and Tony remained in touch in recent years will never be known, but we like the idea that neither of them ever seemed to lose their youthful vigour.