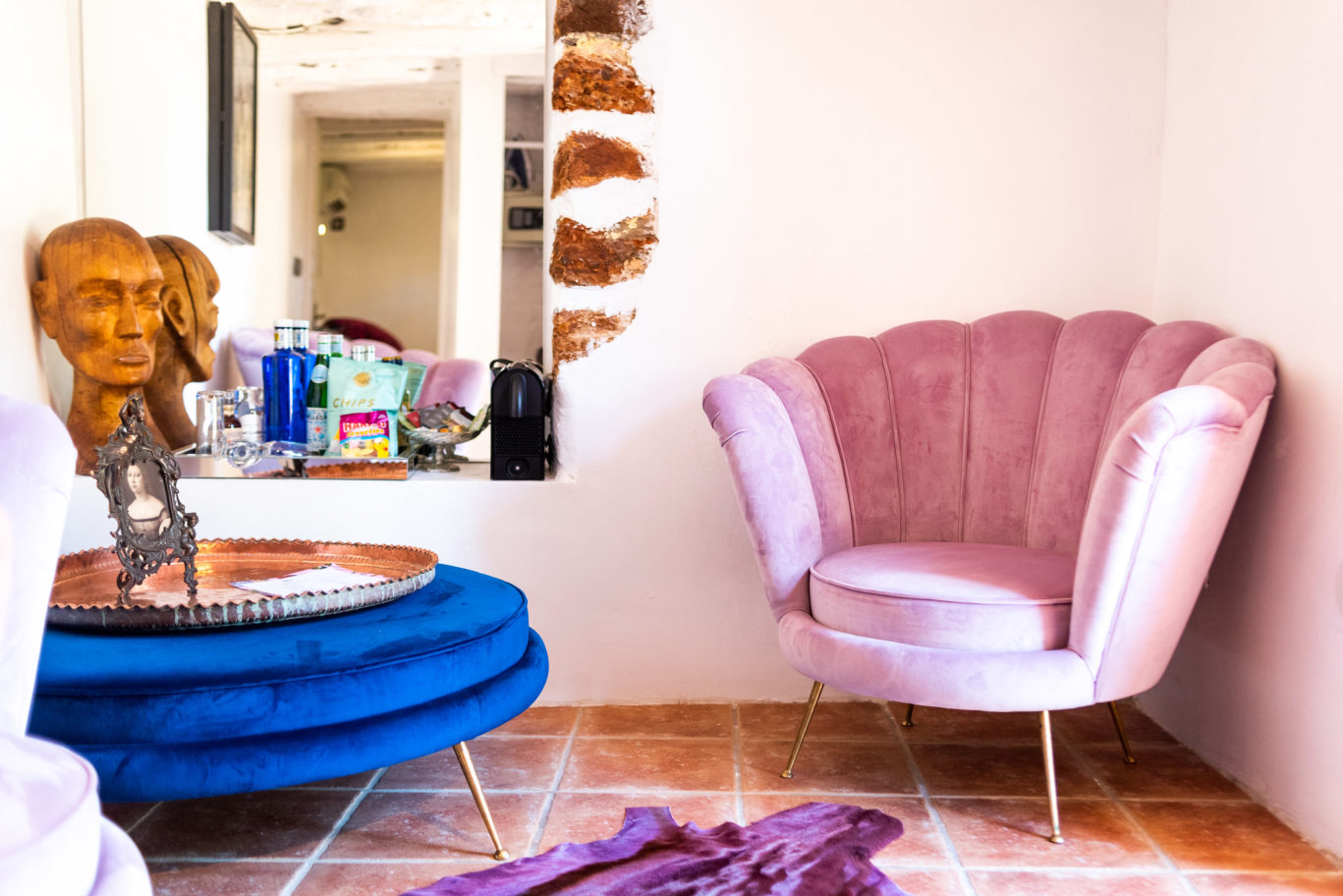 Our sensual cave of seduction, sex appeal and scandal

The floor plan at Pikes is something that has confused many a guest since the hotel opened in 1980 – quite possibly due to the fact that when it came to adding new rooms and spaces, Tony Pike didn’t ever work to a plan, per se. It was always a case of needs must – whenever there was a demand to build more rooms (pretty much every year back in those early days), Tony simply looked around the hotel grounds until he found an area that seemed to fit the bill in terms of size. He’d break ground, then build it up brick by brick with his very own hands, giving each room a unique name, and also numbering them sequentially, regardless of where they were located on the property.

We’ve since re-numbered much of Tony’s higgledy piggledy ‘order’ to help make some sense of it all, however one of the rooms which managed to retain its original numbering is Room 10. Tony had originally dubbed the little garden suite Zingaros 1 when he constructed it from a former carport back in 1983 (ZIngaros 2 was its larger neighbour across the garden path, Room 9 – now known as our Rockett St George suite). Zingaro translates roughly to gypsy – someone who travels from place to place rather than settling down in one location. Perhaps Tony named it so in honour of his formerly nomadic life; maybe it was a nod to his well-travelled guests – either way, it would quite possibly be considered un-PC in today’s society but then again, our Tony was never really one to be worried about social conventions, was he? 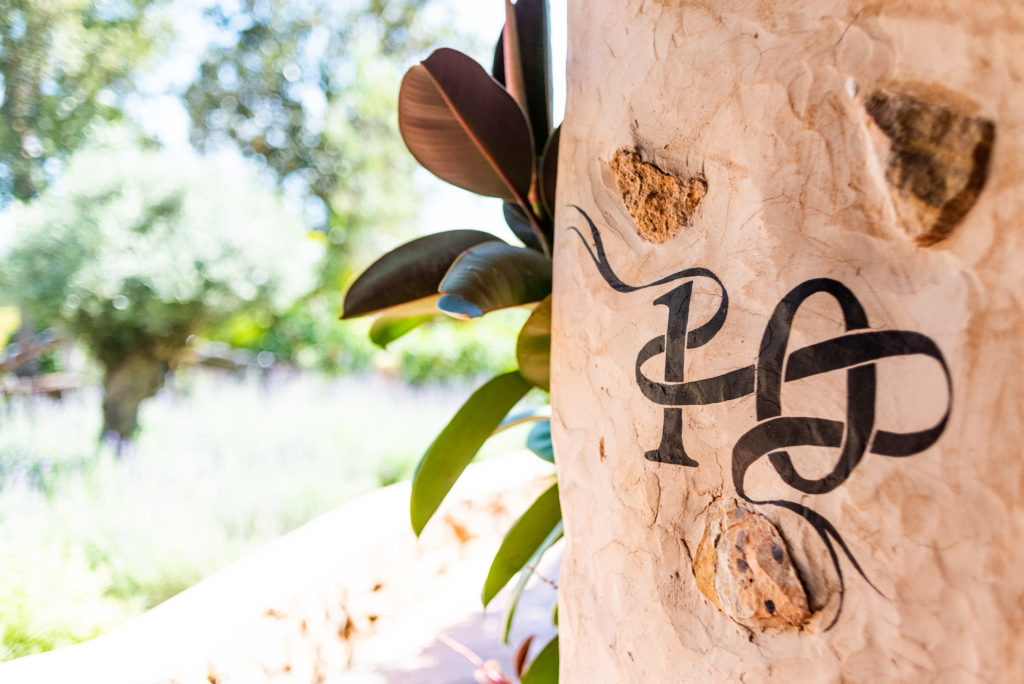 Set at the top of the garden path, tucked away to the left of the huge double doors that open into Plaza Mayor, and camouflaged beneath a canopy of flowering pink bougainvillea, it’s easy to miss the rustic wooden door that leads to Room 10. There’s something about its semi-hidden location that makes you feel as though you’re staying in a secret room – and in previous years, if the truth must be told, as its dark, damp and shady interior was slowly crumbling into disrepair, we started thinking of it as our dungeon room. And not in a cool, Game of Thrones kind of way.

As 2018 came to a close, it became very apparent that it was time for Room 10 to get the major facelift it deserved – while it had obviously had the odd upgrade to the plumbing and air-con over the past 35 years, it still definitely had a feeling of the 80s that our creative director Dawn Hindle wanted to bring into the current day. As with all rooms at Pikes that have had a makeover under Dawn’s creative guidance, the idea was to retain the authenticity of Tony’s original design and décor, but inject some modern day, rock and roll edge and opulence. When it came to seeking inspiration, Dawn didn’t need to look any further than our tenth suite’s original bathroom tiling. 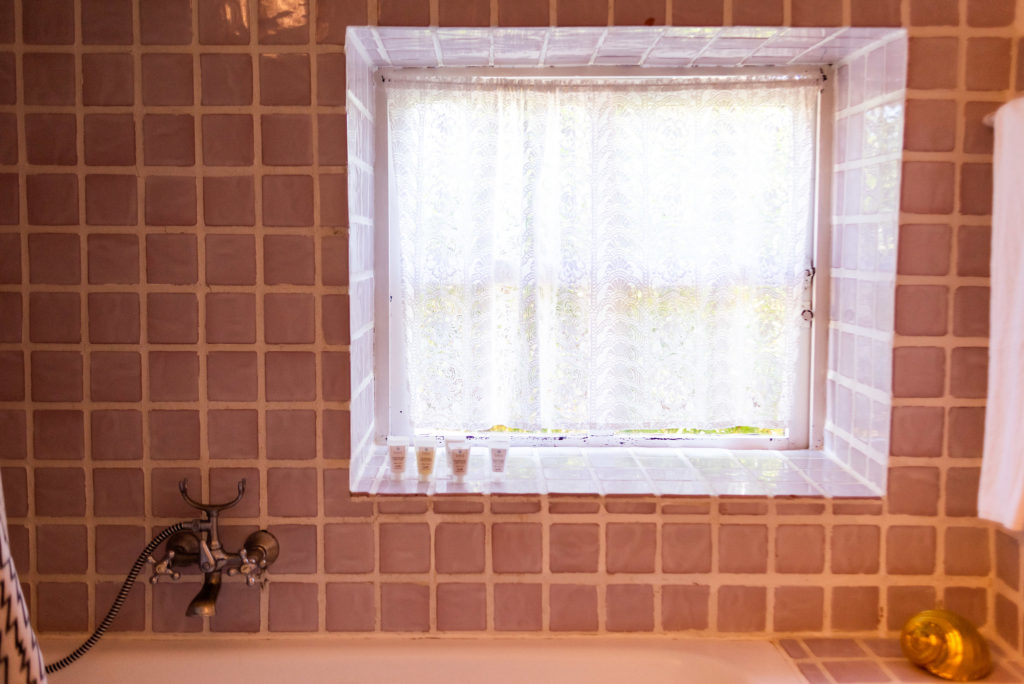 Tony had always been proud to tell anyone who’d listen that he’d built every single brick of the hotel himself (he may have been prone to exaggeration there), and another ‘fact’ he prided himself on was the fact that no two bathrooms at Pikes were alike. Again, he declared he’d built each one with his bare hands – while most of the bathrooms have a distinctly Spanish feel (think blue, white and yellow tiling), yet Tony must have been building Room 10 with a female paramour in mind as he went completely off-piste and designed a space beset from floor to ceiling with charming musk-pink tiles. That, or perhaps he was homesick and craving the popular but contentious Aussie ‘musk sticks’ sweets!

Regardless of Tony’s inspiration, Dawn had found hers. While the sitting room and bedroom would receive a complete overhaul, the bathroom – complete with its super-deep tub and quaint hand-painted sink – had to stay, its pink tiles becoming the basis for the feminine colour palette that would echo throughout the rooms. Speaking of tiles – all the old dark terracotta tiling that had given the walls a slightly grimy appearance – were ripped out to make way for rendered white walls that would open up the space completely. The Sabina beamed ceilings were also given a coat of white paint and all of a sudden, our former dungeon appeared more like a chic and spacious love cave – without the need for any major architectural changes. 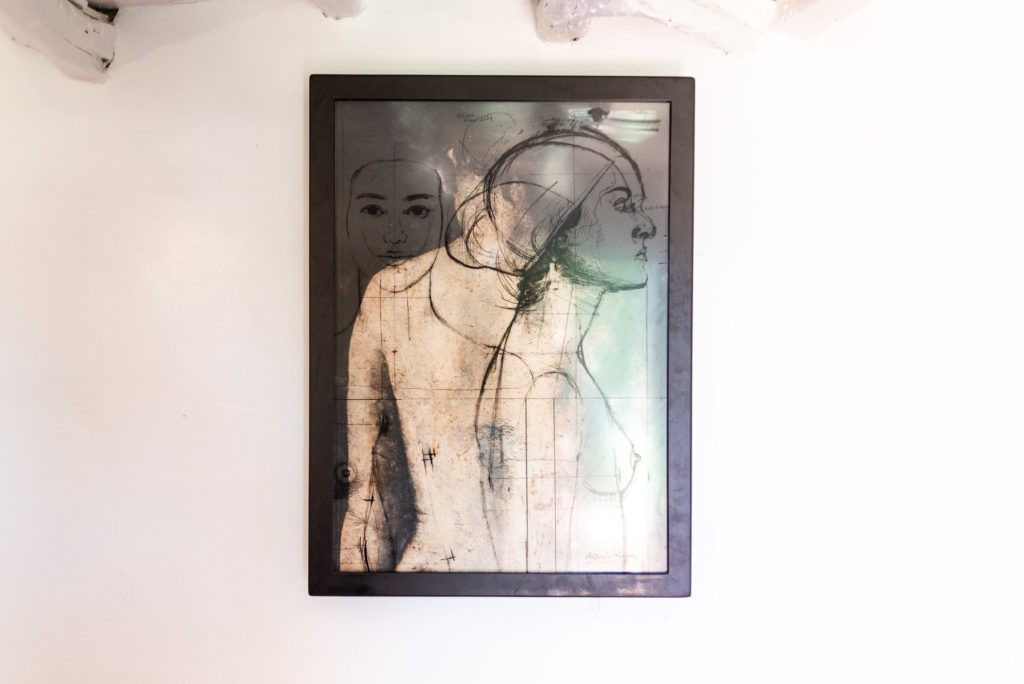 Once the structural elements had been taken care of, the real fun – decorating – could begin. With the fleshy, pink bathroom hue on her mind, Dawn’s thoughts turned to body parts, which set the theme for the décor throughout the space. An anatomical art book is framed and hanging in pride of place as you enter the room – one part Da Vinci’s Vitruvian Man, another part medical journal and with a slight touch of industrial HR Giger, the book has become the centrepiece within a room that also features wooden heads and a photo of a Victorian bust in a vintage Art Deco frame featuring the female form.

There are currently plans afoot to create a sensual, pink installation to walk through in order enter the bedroom – an homage to femininity and perhaps a tongue in cheek (ahem) nod to the room’s original builder’s penchant for women – but that’s a job for the winter months. Right now, guests can be satisfied with sitting Venus-style on the sensual, shell-shaped pink velvet armchairs and pouffes in the living room, while digging their toes into the silky lavender sheepskins on the floor.  This furniture came to us through a stroke of coincidental luck (good for us, bad for someone else), as the luxe furnishings had originally been created for another hotel that didn’t see the light of day. The pieces made their way to a high-end second-hand warehouse in Ibiza on the exact day Dawn was out hunting for musk-pink décor – what can we say? One man’s (never used) trash is another woman’s treasure.

Through a simple white wooden door lies the intimate boudoir – some guests may think the simple mirror on the wall has been placed there to make the space appear bigger; though the more creative among you may quickly tap into its more pleasurable purpose when you realise exactly what it could reflect from the bed. We’re sure Room 10 – just like every room at Pikes – has had its fair share of scandal and seduction over the years, and with its sensual new look and feel, we predict it will have even more in the years to come. Fittingly, the last scandal to have taken place in Room 10 before its renovation was caused by none other than the man who laid its foundations: our dearly departed Tony Pike.

One late summer night in 2018, just a few days before the hotel closed for the season, Tony was having dinner in Room 39 with Matt Trollope, the ghost writer of his biography Mr Pikes: The story behind the Ibiza legend. By this stage, Tony had moved out of Pikes and into the assisted living facility in Ibiza where he would spend his final few months, but there was still plenty of life left in our hotelier yet. On this particular night, he was determined not to return to his new digs. “If you’re staying here Matt, I’m staying here,” he declared, and dutifully, our F&B manager (and long-term friend of Tony) Steve Hughes arranged for him to stay in Room 10. 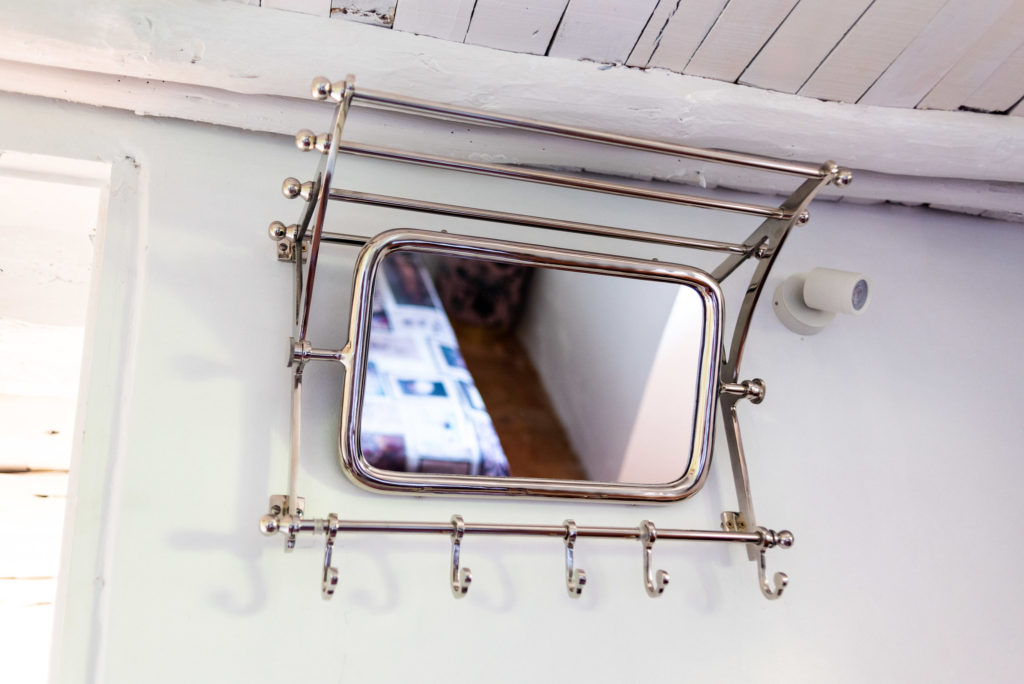 At Tony’s memorial service earlier this season, Matt Trollope recalled the story for Mr Pike’s nearest and dearest: “After we had dinner – which was probably Tony’s last dinner at Pikes – I helped Tony to his room. Now, we all know he was a bit doddery on his feet towards the end of his reign and I took an executive decision to protect himself (and the guests!) by locking him in his room. I explained this to Tony and checked on him a few times throughout the night – we sat and had a beer together from the minibar and then I locked him back in again.”

The story continues at around 8am the next day, as Matt was standing outside reception. “I was thinking I’d go and get some breakfast and as I walked around the corner, Tony’s walking down the hill! I said ‘What happened?’ He said ‘I climbed out the bathroom window.’ I asked why: ‘Because you locked me in again you c*nt!’ He was extremely frail, after a stroke a few weeks earlier, I have no idea how he found the strength to jump out of that window – but that was Tony. He always found the strength to fight back.” 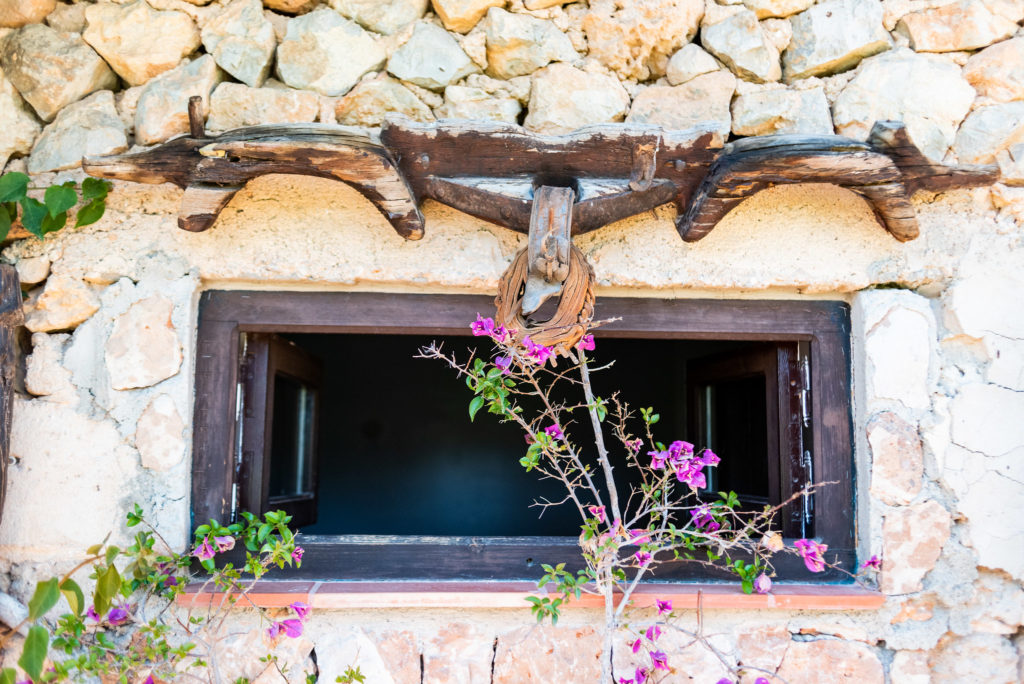 Our individually designed rooms each have their own personality to make for a truly memorable as well as comfortable stay.